Relieving the Pressure of Glaucoma

Keeping patients educated and adherent to treatment can help prevent further vision loss due to glaucoma.

Keeping patients educated and adherent to treatment can help prevent further vision loss due to glaucoma. 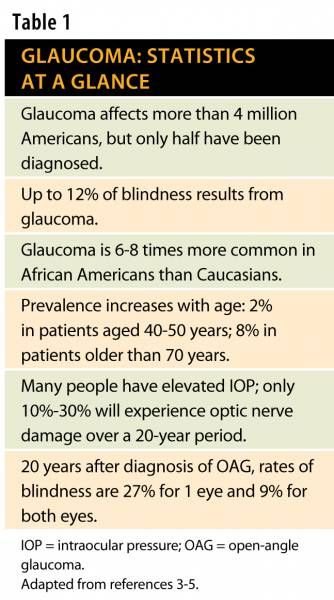 Initial vision loss is often subtle; peripheral vision is affected first, and is followed by central vision loss. Up to 40% of retinal nerve fibers may be destroyed before patients detect visual loss and seek treatment.2,3 When both eyes are affected, disease progression is not symmetrical.

Glaucoma is a class of diseases with various subtypes. Open-angle glaucoma (OAG) and angle-closure glaucoma (ACG) are the most common. These subtypes are further classified as primary (stemming from physiological eye dysfunction) or secondary (stemming from another condition, such as steroidinduced glaucoma, infections, uveitis, or diabetic neuropathy).

In ACG, the iris bulges forward, completely blocking the drainage angle and preventing aqueous humor from draining into the trabecular meshwork. Onset is rapid, and acute ACG symptoms include severe eye pain, headache, nausea, vomiting, and visual blurring.1 ACG is common in Asians; approximately 91% of bilateral blindness in China is linked to ACG.3 ACG is considered a medical emergency requiring immediate treatment.

Therapeutic options include betablockers, prostaglandins, carbonic anhydrase inhibitors, adrenergic agonists, and miotics. Some agents have serious side effects and are contraindicated with medications used for common conditions (eg, decongestants; see package inserts for contraindications with other agents). Further complicating treatment decisions, many patients require more than 1 agent to achieve optimal IOP. Frequently used combination therapies include brimonidine and timolol, latanoprost and timolol, and dorzolomide and timolol.6,7

Surgical options are second-line treatments when medication fails to reduce IOP. Trabeculectomy is the most common procedure, during which surgeons remove a small piece of the trabecular meshwork and create a new opening for drainage. Other surgical options include laser trabeculoplasty (laser is used to open channels), laser cycloablation (cilliary that produces aqueous humor is destroyed), insertion of aqueous shunt devices, and viscocanalostomy (a superficial sclera flap is created).8 Evidence is lacking demonstrating the superiority of any 1 procedure.9 Following corrective surgery, 50% of patients require medication within 2 years.5

Counseling begins with reviewing the basics; 16% of African Americans and 9% of Caucasians are unfamiliar with glaucoma.4 Up to 50% of the population indicate they have heard of glaucoma, but are not sure of its meaning.4 Table 25,10-13 provides additional points to consider when counseling patients with glaucoma. 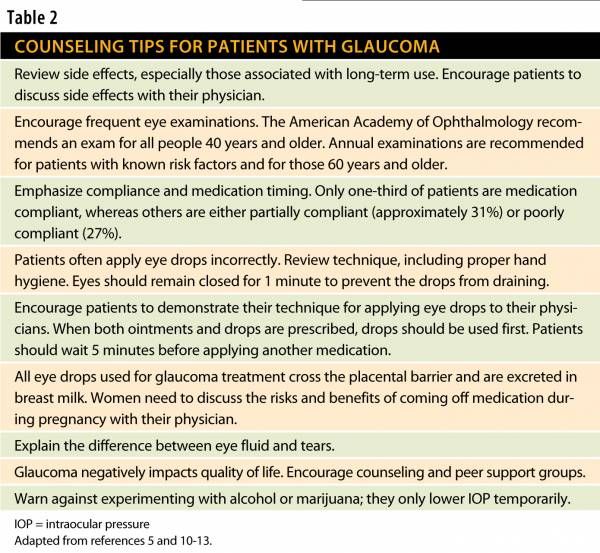 Early detection and intervention are the most effective strategies for preventing blindness.3 Toward that objective, pharmacists should take every opportunity for improving public awareness. PT

Adapted from references 6 and 7.

· Have fewer side effects

· Appear to have nerve-protecting properties

· Considered second-line treatment, less effective than beta-blockers or prostaglandins, but have fewer side effects

· Brimonidine is particularly effective for long-term use, but is linked to lethargy and mild low blood pressure, 12% risk for allergic reaction

· Side effects for both agents include dry mouth and altered taste

· Narrow the iris muscles and constricts the pupil, pulling the iris away from the trabecular meshwork

· Pilocarpine is the preferred miotic, but drops must be applied several times daily

· Can cause nearsightedness, teary eyes, eye pain, and increased risk for cataracts