Preparing for USP : The Time Is Now

Preparation for the implementation of USP is a multifaceted process that every pharmacy will face.

Preparation for the implementation of USP <800> is a multifaceted process that every pharmacy will face.

In recent years, several tragic and highly publicized cases have raised concerns about the handling of chemotherapy and other hazardous drugs by health care workers. For instance, pharmacist Sue Crump developed pancreatic cancer at the age of 55 years after a 23-year career in oncology pharmacy practice. Before she died, she spoke out about the safety gaps in chemotherapy handling and encouraged regulatory action to address these concerns.1-3

As a result of Sue Crump’s case and other cases, as well as abundant evidence indicating an increase in cancer risk, reproductive hazards, and genotoxicity concerns in health care professionals handling hazardous drugs, individual states have begun to institute more stringent standards regarding the storage, handling, and transport of these medications. States with legislation tightening standards of hazardous drug handling currently include Washington, Maryland, and North Carolina.3

To address these concerns in a standardized way on a nationwide scale, the United States Pharmacopeial (USP) Convention has developed a new set of regulations: proposed USP <800>. These regulations will help improve safety in the preparation, storage, and transport of hazardous medications. However, these changes will take time to gain acceptance by regulatory bodies, and stringent requirements may lead to delays in implementation.3-6

Regarding this delay in enforcement, Patricia C. Kienle, RPh, MPA, FASHP, director of accreditation and medication safety at Cardinal Health, member of the USP Compounding Expert Committee, and chair of the USP Hazardous Drug Subcommittee and Expert Panel noted, “Once published, there is a lag time before it is enforceable—6 months from the time of publication&mdash;and this may need to be a longer time period for USP <800>.”4

Because there is this major lag in enforcement, pharmacists and hospital pharmacy managers should be proactive about implementing new policies to protect health care professionals from chemotherapeutic medications and other hazardous drugs. According to Kienle, “People should not be paralyzed by [the proposed regulations of USP <800>]. Some say, ‘I’m going to wait until it’s absolutely done and then I’m going to start to react.’ These are personal safety issues that need to be addressed now.”3

Further adding to the urgency of implementing more stringent protective protocols, pharmacists and other health care professionals have reported acute side effects associated with preparing and administering hazardous substances. Many pharmacists and nurses may keep these concerns private or speak about them only with family members or personal physicians. However, as concern about the safety of current hazardous drug handling grows, more health care professionals may begin to discuss these concerns openly. 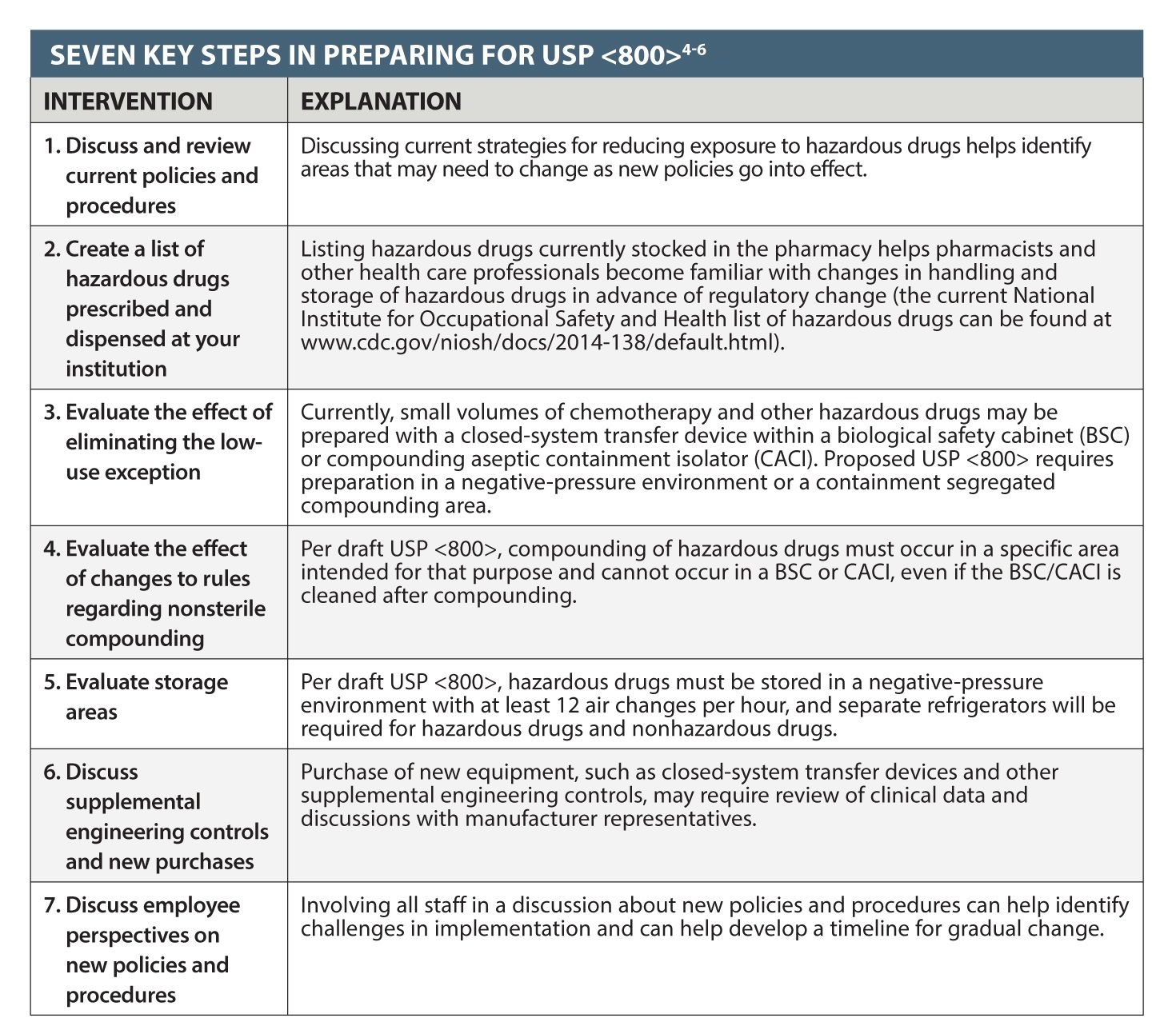 In a 2004 report, the National Institute for Occupational Safety and Health reported several cases of both transient and chronic effects after possible hazardous drug exposure7:

In addition to the above reports, some evidence indicates that health care workers preparing, handling, and administering chemotherapy develop transient dysgeusia that may have a metallic character. These taste disturbances often occur after handling platinating chemotherapeutic drugs. Considering that more than two-thirds (68%) of patients using platinating agents experience a metallic taste as a side effect of therapy, even a transient experience with this side effect may lead health care professionals to worry. In some cases, these worries have been anonymously reported to regulatory agencies, resulting in comprehensive workplace safety audits.8-10

In 1 such audit at an outpatient oncology clinic, 3 of 5 health care workers who handled chemotherapy drugs reported experiencing eye/nose irritation and headache. In a review of health records from the prior year, 4 of 9 employees noted experiencing mucous membrane irritation, nausea, a metallic taste in their mouth, and/or intermittent tiredness throughout the work day. Further supporting a causal association between workplace exposure and these anecdotal events, employees who experienced side effects noted that the events were temporally associated with time at work.8

One of the important decisions in the ultimate implementation of proposed USP <800> is the selection of appropriate supplemental engineering controls, such as closed-system transfer devices (CSTDs). These systems enable preparation and administration of hazardous drugs with a lower risk of contaminating work areas. As nursing departments gain access to CSTDs for administration of hazardous drugs pursuant to implementation of draft USP <800> guidance, most hospital pharmacies in the United States will ultimately gain access to these systems.4-6

As experts in pharmaceuticals and pharmaceutical devices, pharmacists can provide guidance on the relative quality of CSTD systems to nursing departments purchasing them for the first time. Currently, there are 5 CSTD devices available on the US market: the PhaSeal system by Becton Dickinson, SmartSite/ChemoSafety by CareFusion/Becton Dickinson, On-Guard/Tevadaptor by B. Braun, ChemoClave/Spiros/ChemoLock by ICU Medical, and Equashield/Equashield II.4-6

Choosing a CSTD system with proven efficacy in reducing contamination is an important factor. Evidence supporting the protective efficacy of the BD PhaSeal system and the EquaShield/Equashield II system includes the following:

Preparing for implementation of draft USP <800> is a multifaceted process that every health system and hospital pharmacy will face in the coming years. Recognizing cases of potential exposure within the hospital environment and taking steps to implement regulations in advance of full implementation helps hospital administrators protect employees while building employee trust and allaying the difficulties inherent in incorporating new regulations into everyday practice. SPT