Scientists have discovered how the hepatitis C virus (HCV) hijacks the communication systems within the host cells it infects, which may lead to the development of new therapeutic targets.

The findings, published in Nature Communications, build upon prior work in the malaria scope, which found that preventing the host cell protein kinases from working caused it to kill malaria parasites.

In the current study, the investigators used an antibody microarray to simultaneously examine hundreds of factors that are involved in cell signaling and were modulated by HCV replication, including human protein kinases.

“The antibody microarray allowed us to find a number of new cell signaling pathways that were activated or suppressed by an HCV infection,” said author Christian Doerig.

Using gene silencing technology, the investigators sought to determine whether the identified genes’ cell factors were imperative for HCV replication, and as a result, potential targets for anti-HCV compounds.

They used a compound recently discovered by investigator Nathanael Gray to block the activity of MAP4K2, an important kinase in HCV replication.

“Nathanael sent us his new molecule, and we put it in our host cells, infected them with HCV and found that while the cells were fine, they didn’t support virus replication anymore,” said first author Dr Reza Haqshenas.

The authors said that the platform can be used to identify new anti-infective compounds against any pathogen, which includes viruses, bacteria, and parasites that invade mammalian cells.

“Importantly, fighting a pathogen by hitting an enzyme from the host cell is likely to slow the emergence of drug resistance, because the pathogen cannot easily escape through the selection of target mutations,” Doerig said.

Combining both antibody microarray and gene silencing approaches allowed the investigators to identify several factors that play an important role in the viral replication cycle.

“While some of these factors had previously been reported as influencing HCV replication, several others are novel to our understanding of the molecular aspects of HCV infection,” the authors wrote. “The combination of antibody microarray and gene silencing represents a novel, system-wide approach for the understanding of infectious disease biology and can be expected to provide a strong basis for the development of urgently needed lead compounds against not only viruses but also any intracellular pathogens of bacterial or protist taxons.”

To further their study, the investigators next plan to explore the Zika virus and toxoplasmosis. 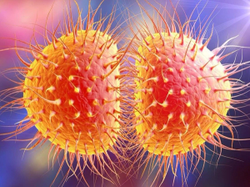