Pharmacists Address Proper Dosing of Anticoagulants in CAD and PAD

Pharmacists address proper dosing of anticoagulants in CAD and PAD In a Pharmacy Times® Insights series, 2 experts agree that communication is incredibly valuable when discussing guidelines and recommendations.

In a Pharmacy Times® Insights series titled “Proper Dosing of Anticoagulants in CAD and PAD,” Paul P. Dobesh, PharmD, FCCP, BCPS, professor in the Department of Pharmacy Practice and Science at the University of Nebraska College of Pharmacy in Omaha, and James B. Groce, PharmD, CACP, a professor of pharmacy at Campbell University College of Pharmacy & Health Sciences in Buies Creek, North Carolina, and a clinical pharmacy specialist (anticoagulation) at Cone Health in Greensboro, North Carolina, discussed several topics regarding the proper treatment and dosing of anticoagulants in patients who have coronary artery disease (CAD) with or without peripheral arterial disease (PAD).

Dobesh defined PAD as an atherosclerotic disease that exists in the large, peripheral vessels of the legs, whereas CAD is an atherosclerotic disease that exists in the coronary arteries. The typical symptoms for patients experiencing CAD are angina or chest pain and even acute plaque rupture that leads to an acute coronary syndrome (ACS). Among patients with PAD, the most common presentation is intermittent claudication, which occurs when they walk. Some men experience discoloration or a loss of feeling in their legs due to loss of blood flow.

When asked about the prevalence of these diseases and what patient populations they affect, Groce said that more than 1 in 3 adult patients in the United States will have at least 1 type of vascular disease. Additionally, 16.5 million adults in the United States have coronary heart disease, and the estimated annual incidence of heart attack or myocardial infarction (MI) is about 580,000 new heart attacks and 210,000 recurrent heart attacks each year. PAD affects about 8.5 million patients, and 80% will have intermittent claudication brought on by increased vascular demand when exercising within 5 years of their initial diagnosis.

The primary prevention for these diseases is complicated and centers on identifying risk, according to Dobesh. These risk factors include diabetes, dyslipidemia, hypertension, and smoking. After these risk factors are alleviated, mortality falls. Dobesh also suggested that pharmacists remain vigilant in recognizing risk factors such as age and family history.

Results of recent studies published in the New England Journal of Medicine showed that aspirin for primary prevention may not play as big a role as previously expected. Newer research into hypertension and lipids shows that the addition of low-dose aspirin does not provide the benefits previously thought to occur. An obvious risk of bleeding exists, so the role of aspirin in primary prevention for coronary disease seems to be limited, according to Dobesh.

In PAD, the lower-level prevention recommendation is an ankle-brachial index (ABI), in which a provider takes blood pressure (BP) from the leg; this is highly beneficial for diagnosing atherosclerosis noninvasively. Data also suggest that for patients who had asymptomatic PAD based simply on an ABI, aspirin might provide some benefits.

The experts then discussed the recommended approaches to managing CAD and/or PAD in patients, including a review of the guidelines from the American College of Cardiology (ACC) and the American Heart Association (AHA). For patients who had an ACS or a coronary event, dual antiplatelet therapy is a grade 1A recommendation. Physicians should conduct this treatment for a year, regardless of whether a stent is used, according to Dobesh. These patients are then treated with a high-intensity statin to control their BP and urged to stop smoking.

“For other things, like giving [angiotensin-converting enzyme (ACE) inhibitor therapy], it doesn’t probably matter [whether] it’s an ACE inhibitor or an angiotensin receptor blocker [ARB]. Several studies have shown that they have what we call a vasculoprotective effect…,” Dobesh said. He added that patients with stable ischemic heart disease do not necessarily need dual antiplatelet therapy but should be on aspirin.

“Chronic PAD has been, unfortunately, very woefully, poorly studied. Aspirin right now is the only thing we’ve ever had that’s been shown to reduce cardiovascular [CV] events,” Dobesh said.

In controlling symptoms, cilostazol does not change CV events but improves walking distance. Other options include carnitine and propionyl-L-carnitine, but those have yielded mixed results. Patients may undergo procedures, but that is not necessarily a guideline.

“The largest study you’re going to find in this area [includes fewer than] than 100 patients. There’s just not good evidence about what to do in this setting, and, I think the patients [with PAD] have really been neglected when it comes to trying to find a way to better their outcomes,” Dobesh said.

Nevertheless, health care providers are ensuring that treatment involves adequate antithrombotic therapy. After that, they focus on ACEs, ARBs, β-blockers, and statins. For patients with PAD, the only treatments are aspirin and perhaps an exercise program.

The key to identifying these patients, Dobesh said, is a careful review of the problem and then contextualizing it. Additionally, practitioners must ensure that one-off orders are for the right drug, patient, indication, and dose.

“We liken it to not just medication reconciliation but medication reconciliation tied to an appropriate indication on the problem list. And when we see the absence, based on a problem list, of a certain drug therapy that we know should be present, it really is incumbent upon us as pharmacists… to make an intervention by calling the provider and giving what would be recommended drug therapy for that patient,” Dobesh said.

The experts then discussed the COMPASS trial (NCT01776424), a landmark study of more than 20,000 patients across 40 countries and more than 300 sites. The study included patients who had stable coronary disease. These patients were not within their first year of dual antiplatelet therapy and were outside a year of their ACS event. About 91% of the participants had coronary disease, 27% had PAD, and 17% had both, according to Dobesh. The participants were well controlled, with more than 90% having received ACE inhibition therapy, β-blockers, and lipid-lowering therapy. They were randomized to aspirin 100 mL as a standard of care and rivaroxaban (2.5 mL twice daily).

The primary outcomes were CV death, MI, stroke, and a modified definition of International Society on Thrombosis and Haemostasis major bleeding. After a data and safety monitoring board modified half the data, or about 1100 outcomes, the study was halted because of an ethical question related to the standardof care.

“The standard of care was beaten so badly that the study had to be stopped early by the data and safety monitoring board. There was a 24% relative reduction in CV death, MI, and stroke, favoring aspirin with low-dose rivaroxaban as opposed to aspirin by itself…,” Dobesh said. “The aspirin bar was always bigger than the low-dose rivaroxaban and aspirin arm. So there was always a benefit in each one of those.

“What’s interesting is MI was…reduced by 14%, [and] that was probably the one that was impacted the least, but there was a 22% significant reduction in cardiovascular death; that was statistically significant by itself,” Dobesh noted.

To implement the outcomes of this study, providers should be aware of what they mean for patients, Dobesh said. In other words, for the ACC and the AHA to incorporate these results into their guidelines, the role of the antithrombotic drug with the antiplatelet agent should be understood and implemented. The European Society of Cardiology has already accomplished this through its guidelines for death prevention in patients with CAD on including an antiplatelet agent and adding a second agent of an antithrombotic drug per the COMPASS clinical trial: rivaroxaban, 2.5 mL twice daily, with concomitant aspirin.

Ultimately, the experts agreed that communication is incredibly valuable when discussing guidelines and recommendations. “For so long we’ve accepted as status quo the role simply of an antiplatelet agent. And now I think with these evidences that have emerged with respect to both efficacy and safety, we should really give thought to being a part of the role of seeing that these patients now are afforded not only antiplatelet protection but [also] an antithrombotic agent combined with aspirin. So I think that’s the role that we can certainly play as pharmacists,” Groce concluded. 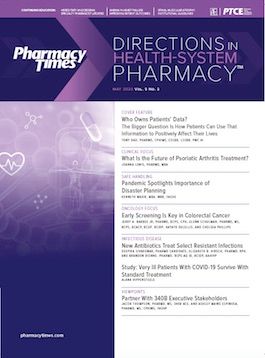