Patients First: Is Specialty Pharmacy in the Blueprint?

The meteoric rise in drug spending over the past 10 years has been driven by specialty therapeutics, while spending on traditional therapies has decreased.

The meteoric rise in drug spending over the past 10 years has been driven by specialty therapeutics, while spending on traditional therapies has decreased (Figure). These trends are driven by access to less expensive generics countered by tremendous advances in new therapies for disease states with previously unavailable solutions. These advances have come at a price and the industry has made the decision to largely focus research and development spend on therapies that often include smaller populations of patients and spread the cost of development across fewer individuals. The result of this focus has fueled the growth of specialty pharmacy, as these products require a higher standard of pharmaceutical care than traditional therapies. 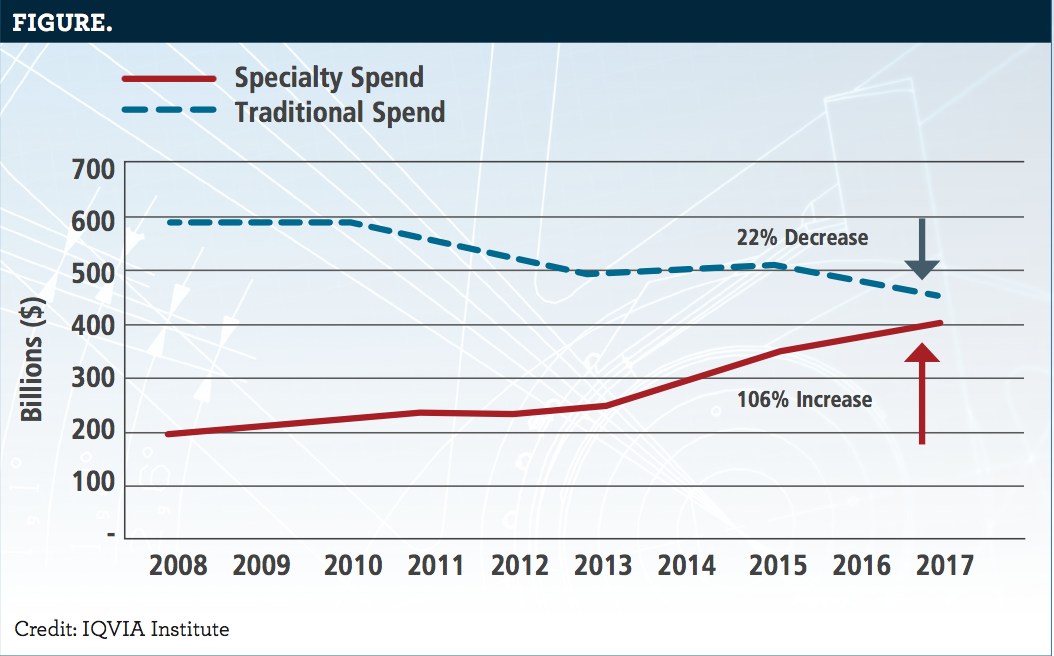 The plan takes a holistic approach to drug spend with a primary focus on payer and patient access to achieve 4 goals:

It has been estimated that 95% of all drug dispensing volume is in traditional products. As such, the systems in place to manage costs have largely been more focused on traditional therapies, in which multiple therapeutic options may be available to treat a specific disease state, such as hypertension and cholesterol. Through formularies, payers have leveraged products against each other. Specialty therapies, given the profile of the diseases they treat, have been less tightly managed, in some respects, given the fact there is less competition. Exceptions to this have emerged the last few years, demonstrated by the tactics used by payers with PCSK9 inhibitors and hepatitis C antiviral drugs. No doubt the administration is looking at these as examples of what might be done in the future, therefore, it raises the questions of how is this all going to get done and how long will it take?

We have seen how the political process affects our daily professional lives. The administration’s plan proposes ideas for finding savings in several key areas in which they have influence, such as in Medicare Part D. Here, the administration proposes to modify the protected classes policy. Part D plans have been largely unable to negotiate lower prices for high-cost drugs without competition. The document states, “This change could allow Part D plans to use the tools available to private payers outside of the Medicare program to better negotiate for these drugs.”

The impact of having a protected classes policy has hampered the ability of Part D to negotiate price concessions with manufacturers because they are not able to chal- lenge manufacturers with noncoverage. In the case of this protected class policy, every drug in a class must be made available albeit under proper conditions. The economic impact of this policy has been that pricing for those drugs has not been subjected to the same pressure as non-protected classes. The administration’s plan is to shift tactics toward managing costs.

Azar said during a White House press briefing on May 11, 2018, that, “It will take months for the kind of actions that we need here...It took decades to erect this very complex, interwoven system.”

Azar further stated that for more than 15 years, government-run programs failed to keep up with the times and leverage the same tools used by commercial plans to manage specialty products.

“We need now to bring the same tools that are available to the private sector to those Part D drug plans, so they can negotiate even better,” he said. On Part B products, traditionally referred to as “buy and bill,” we expect that many of these drugs will be folded into Part D so that those too can be better managed from a cost perspective. “We’ve got to figure out ways to move those drugs, especially the high-cost ones, into the private Part D plan negotiations so that we can get a deal and start getting bargains on that for our seniors and for taxpayers,” Azar added during the press briefing.

Over the course of the next several months and years, the guidance documents will serve as a blueprint and like most blueprints, plans change and shift. Given the impact of political influence across stakeholders from pharma, payers, patients, and providers, I predict there will be a good deal of dialog before this all settles out. We are at the beginning of a long journey. These are very important times for all stakeholders to raise their voices and assure that they are heard.

Impact on Payers and Patient Outcomes

Expect a lot of finger pointing in this process toward pharmacy benefit managers (PBMs), how they are compensated, and the rebating system altogether. There is a good deal of focus on the entire structure of using rebates as the method of negotiating discounts in the pharmacy channel. The Trump administration is seeking specific feedback on the role of PBMs in managing the drug spend, how they are compensated for their activities, and any potential conflicts of interest.

The title of the blueprint begins with American Patients First…, and as we have previously stated in this journal, put the patient first and good things will follow. PBMs are under the microscope, specifically regarding how they’re getting compensated by their customers—the insurance companies&mdash;but more critically how they are getting compensated by pharma, for whom their role is to be negotiating value. In the middle of this debate is the rebate mechanism and who gets paid what for what.

Will rebates go away? Will net pricing prevail? Where does the clinical attributes of the product come into play? Where does the role of the provider and the patient fit within the care stream? Let’s hope that we don’t end up with many of the failed systems often observed in countries with socialized medicine and rationing. In these systems, the patient often ends up paying out-of-pocket to get the most appropriate medication. In my view, we will have failed if this ends up being the case. We must find the balance between price and value, with the latter measured by better patient outcomes driven by putting the patients first.

Given the focus on cost, there are several more general tactics that could be deployed, many of which will impact specialty therapeutics:

• Remove some of the “gaming” of regulatory and patent processes by brands that inhibit the approval of generics and biosimilars to boost price competition.

• Increase the use of value-based pricing by expanding outcome-based payments.

• Prohibit Part D contracts that include “gag rules,” which prevent pharmacists from informing patients when they could pay less out-of-pocket by not using insurance.

• Expand the use of co-pay discount cards in Medicaid.

• Require beneficiaries be informed about their out-of-pocket costs prior to receiving a Part B drug or a Part D drug prescription and whether lower-cost alternatives exist.

• Requiring “safety net” hospitals paid under Medicare Part B to use their 340B drug discounts to provide care to more low-income and vulnerable patients.

• Require that the FDA issue guidance to address some of the ways in which manufacturers use REMS programs to delay or block competition from generics.

Review the imbalance on reimbursement based on the site of care for patients to maintain site neutrality between the inpatient and outpatient settings and ensure providers are reimbursed appropriately so care is provided in the least expensive setting.

Stand Up and Be Heard

In 2016, our nation voted for change and now it is on the table. The time is now to be heard. No matter if you are a payer, pharma, provider, or patient, make sure you are engaged. Get involved with your local and national associations. For those in specialty, there is also the National Association of Specialty Pharmacy (NASP) 2018 Annual Meeting and Educational Conference taking place September 24 to 26, 2018, in Washington, DC. The timing of this event and location is excellent and features a one-stop shop for specialty programs.

Buying In on Biosimilars
Ready for New Rules on Hazardous Drug Management?
A Case for Biosimilar Use: 5 Things You Need to Know
What Makes Specialty Infusion Pharmacy So Special?
Going Beyond the Headlines on Health Spending in 4 Steps
Putting Data to Work in Specialty Pharma
The Missing Link: Care Managementâ€™s Ability to Improve Specialty Pharmacyâ€™s Value Proposition
Will a New Utah Law Change the DIR Conversation?
How Integrated Health Care Delivery Networks Collaborate to Optimize Specialty Pharmacy Care
Limiting the Distribution of Oncology Drugs
Patients First: Is Specialty Pharmacy in the Blueprint?
Related Videos
Related Content