In 2018, watch for novel cancer drugs and several new orphan drugs to affect the market.

The FDA had approved 35 new specialty medications in 2017 at the time of this writing. This is more than twice as many specialty approvals as in 2016 (17) and tops the 33 specialty drugs approved in 2015. In the second half of 2017 alone, FDA-approved specialty drugs included several cancer therapies, a biologic for psoriasis, 2 pan-genotypic (genotypes 1-6) hepatitis C virus (HCV) drugs, and a novel hemophilia medication.

The FDA approved 14 new cancer medications in 2017, including 2 chimeric antigen receptor (CAR) T-cell therapies, Kymriah (tisagenlecleucel) and Yescarta (axicabtagene ciloleucel). In CAR T-cell therapy, some of the patient’s T cells are removed, modified to target the CD19 antigen expressed by certain cancer cells, and then infused back into the patient. Kymriah was approved on August 30 to treat patients younger than 25 who have B-cell acute lymphoblastic leukemia that relapsed at least twice or who are no longer responding to standard treatments. Yescarta was approved on October 18 to treat adult patients with relapsed or refractory forms of non-Hodgkin lymphoma that has been treated at least twice with other drugs. Kymriah and Yescarta are very effective therapies that are given as 1-time intravenous (IV) infusions. Both drugs have concerning adverse effects, including severe neurologic events and cytokine release syndrome, which need to be closely monitored. Kymriah costs $475,000 per treatment regimen, and Yescarta costs $373,000 per treatment regimen.

Gilead’s Vosevi (sofosbuvir/velpatasvir/voxilaprevir) and AbbVie’s Mavyret (glecaprevir/pibrentasvir) are new pan-genotypic drugs that were approved for HCV on July 17 and August 3, respectively. Vosevi was approved for the re-treatment of chronic HCV infection in adults with genotype 1, 2, 3, 4, 5, or 6 previously treated with an NS5A inhibitor—containing regimen or in adults with genotype 1a or 3 previously treated with a sofosbuvir-containing regimen without an NS5A inhibitor. The recommended dose of Vosevi is 1 tablet once daily for 12 weeks. Mavyret was approved for the initial treatment of patients infected with HCV genotypes 1 to 6 without cirrhosis or with compensated cirrhosis. It was also approved for the treatment of adult patients with HCV genotype 1 who were previously treated with a regimen containing an HCV NS5A inhibitor or an NS3/4A protease inhibitor but not both. The recommended dose of Mavyret is 3 tablets once daily with food for 8, 12, or 16 weeks, depending on which (if any) medications the patient has previously tried and whether the patient has compensated cirrhosis. Vosevi costs $74,760 for the 12-week regimen, and Mavyret costs $39,600 for the 12-week regimen.

On November 16, the FDA approved Genentech’s Hemlibra (emicizumab-kxwh) for routine prophylaxis to prevent or reduce the frequency of bleeding episodes in adult and pediatric patients with hemophilia A who have developed antibodies called factor VIII inhibitors. It is a Breakthrough Therapy that was approved 3 months ahead of schedule. Hemophilia A is a rare, chronic, genetic bleeding disorder affecting approximately 16,000 adults and children in the United States. It is caused by insufficient activity of clotting factor VIII, a protein in the blood that controls bleeding.

Patients with hemophilia A experience bleeding episodes that cause pain, irreversible joint damage, and possible life-threatening hemorrhages. An estimated 1 in 3 persons with severe hemophilia A develops factor VIII inhibitors or antibodies to the factor VIII replacement therapies. The presence of these inhibitors can result in an increased risk for life-threatening bleeds or repeated bleeds. Hemlibra is a bispecific monoclonal antibody that replaces the activity of coagulation factor VIII by sticking to both activated coagulation factor IXa and factor X to prevent bleeding episodes for patients who have hemophilia A and inhibitors to factor VIII. Hemlibra is administered as a once-weekly SC injection. The cost depends on the patient’s weight. However, at an average patient weight of 127 pounds, therapy would cost approximately $482,000 for the first year of treatment and approximately $448,000 per year thereafter. 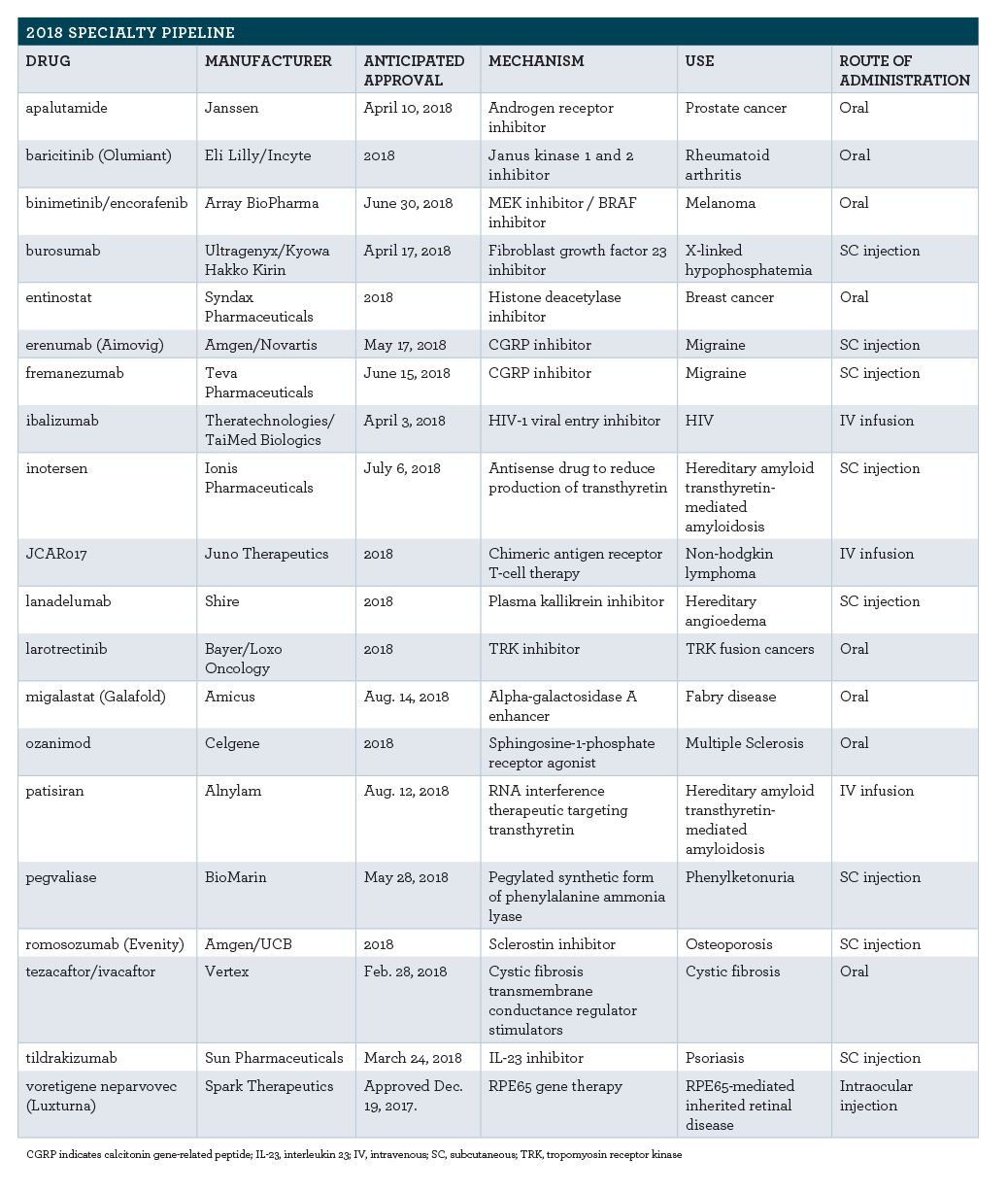 Janssen’s apalutamide is an oral androgen receptor inhibitor that is pending approval for the treatment of men with nonmetastatic castration-resistant prostate cancer (CRPC). Prostate cancer is diagnosed in approximately 161,000 men each year in the United States. Up to 20% of these patients may develop CRPC within 5 years of diagnosis. Currently, no drugs are approved for nonmetastatic CRPC; however, Xtandi (enzalutamide), from Astellas and Medivation, may receive this expanded approval in the second half of 2018. Approval of apalutamide is expected by April 10, 2018.

Bayer and Loxo Oncology’s larotrectinib is an oral tropomyosin receptor kinase (TRK) inhibitor that is in development for the treatment of unresectable or metastatic solid tumors with neurotrophic TRK fusion proteins in adult and pediatric patients who require systemic therapy and who either have progressed following prior treatment or have no acceptable alternative treatments. TRK fusion proteins are present in only approximately 3% of cancer cases; however, they are more common in certain hard-to-treat cancers of the appendix, gallbladder, pancreas, salivary glands, and thyroid. There are between 1500 and 5000 new cases of advanced TRK fusion cancers diagnosed each year in the United States. Larotrectinib is a Breakthrough Therapy with approval expected in the second half of 2018.

Two orphan drugs are expected to be approved in 2018 for hereditary amyloid transthyretin-mediated (hATTR) amyloidosis. This is a condition that affects approximately 3000 Americans. Amyloid fibrils can build up in affected patients and cause organ dysfunction, primarily of the heart, and early death. Eye problems and peripheral neuropathy are also common in patients with hATTR amyloidosis. No drugs are currently approved to treat this condition. Ionis Pharmaceuticals’ inotersen is an antisense drug designed to reduce the production of transthyretin. It is administered as a once-weekly SC injection, and approval is expected by July 6, 2018. Alnylam’s patisiran is another drug in development for hATTR amyloidosis, but it works by a different mechanism and is known as an RNA interference therapeutic. Patisiran is administered via IV infusion every 3 weeks. Approval of patisiran is expected by Aug. 12, 2018. Both inotersen and patisiran have demonstrated efficacy in clinical trials. These therapies may cost more than $300,000 per year.

Theratechnologies and TaiMed Biologics’ ibalizumab is a biologic HIV-1 viral entry inhibitor that is pending approval for the treatment of patients with multidrug resistant (MDR) HIV-1 infection, in combination with other anti-HIV drug therapies. Approximately 10,000 of the 1.2 million Americans with HIV have MDR HIV. Ibalizumab is administered as an IV infusion every 2 or 4 weeks. In a clinical trial, it significantly decreased the viral load in these patients. Ibalizumab is a breakthrough therapy, with approval expected by April 3, 2018.

Ultragenyx and Kyowa Hakko Kirin’s burosumab is a fibroblast growth factor 23 inhibitor that is pending approval for the treatment of X-linked hypophosphatemia (XLH). Approximately 3000 children and 9000 adults in the United States have XLH, a rare bone disease that can cause rickets in children and osteoarthritis and progressive ankylosis of the spine and major joints in adults. Burosumab has demonstrated its efficacy in clinical trials by increasing phosphorus levels in the blood, healing fractures in adults, and improving rickets and growth rates in children. Burosumab is a Breakthrough Therapy with approval expected by April 17, 2018. It may cost more than $100,000 per year.

Erenumab (Aimovig) and fremanezumab are CGRP inhibitors that are expected to be approved May 17, 2018, and June 15, 2018, respectively, for the prevention of migraines. CGRP is a protein that acts as a neurotransmitter and is a potent vasodilator that transmits pain signals that lead to migraine headaches. Approximately 1.6 million Americans will be candidates for treatment with a CGRP inhibitor. In general, CGRP inhibitors may be able to reduce the number of migraine days per month by approximately 2 days. Erenumab is given as a once-monthly SC injection. Fremanezumab is given as a once-monthly or quarterly SC injection. There are additional injectable and oral CGRP inhibitors in the pipeline. These medications may cost up to $10,000 per year.