A new study identified pathways that may serve as therapeutic targets for overcoming drug resistance in acute myeloid leukemia.

Researchers have identified a potential new therapeutic approach against acute myeloid leukemia (AML), according to a recent study published in Science Translational Medicine.

AML can be difficult to treat due to rapidly evolving therapeutic resistance, according to the study. The new approach exploits adaptive resistance—or the way that cancer cells evade the effects of drugs—by engineering a compound designed to hinder the cells’ ability to escape its effects.

Approximately 25% of AML cases are caused by a mutant protein called FTL3, which is commonly associated with poor prognosis, according to the researchers. The study focused on this subtype of AML and aimed to examine the drug resistance process to identify new ways to improve therapy options.

To do this, the researchers treated FLT3-mutant cancer cells grown in the laboratory with an inhibitor drug. After examining the AML cells that survived treatment, the researchers identified a pathway involved in the innate immune stress response, whose activation promoted resistance to drugs targeting the FLT3 pathway.

“We found that these leukemia cells were under stress from the FLT3 inhibitor drug because it was blocking the growth signals they badly wanted,” co-corresponding author Daniel Starczynowski, PhD, said in a press release. “The cells found another way to get these signals through another route that compensated for this, a complex of the kinases IRAK1 and IRAK4, which are involved in the immune system.”

To block the activity of FLT3 and the IRAK kinases, the researchers developed a compound, called NCG1481, which was effective against all 3 protein kinases.

These findings may be applicable to many other cancer types as well; however, the researchers are still working on the development of NCGC1481 and hope to advance to clinical testing.

“There is already evidence that this may be a general cancer resistance mechanism to protein kinase inhibitor drugs,” Starczynowski said. “In theory, the use of drugs that affect many kinases at once, along with other kinds of cancer therapies, could be effective treatments.” 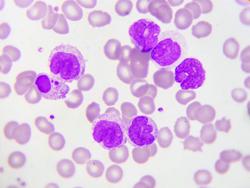