Eravacycline, Omadacycline, Plazomicin, and a Rifamycin Add to the Armamentarium for Treating Resistant Infections

In 2010, the Infectious Diseases Society of America created the 10 x ’20 Initiative in response to the growing global concern about antimicrobial resistance and the lack of antibiotics in the pipeline.1 The initiative called on pharmaceutical companies and the research community to secure FDA approval for 10 novel antibiotics by 2020.

Encouragingly, the FDA has approved 4 agents since 2018: eravacycline, omadacycline, plazomicin, and a rifamycin (table). The agency granted each qualified infectious disease product designation, which allows for priority review, additional years of market exclusivity, and other development incentives.

Furthermore, antimicrobial approvals have increased within the past decade, almost exclusively among derivatives of existing antibiotic classes that expand the spectrum of activity to resistant pathogens.2 Notable antibiotic approvals within the past 5 years include β-lactam and β-lactamase inhibitors (BLBLIs) ceftolozane/tazo bactam (2014), ceftazidime/avibactam (2015), and meropenem/vaborbactam (2017); the antipseudomonal and methicillin-resistant Staphylococcus aureus (MRSA)—active fluoroquinolone delafloxacin (2017); tedizolid (2014); and long-acting glycopeptides dalbavancin and oritavancin (2014). In contrast, agents approved in 2018 were tetracycline and aminoglycoside derivatives and a rifamycin.

Eravacycline and omadacycline are synthetic broad-spectrum tetracycline derivatives comparable to tigecycline and minocycline structurally and mechanistically. They have notable activity against MRSA, vancomycin-resistant Enterococcus, atypicals, anaerobes including Bacteroides fragilis, and nontuberculosis mycobacterium.3-5 Similar to tigecycline, they have minimal activity against Proteus species, Providencia species, and Pseudomonas species but retain activity among resistant Acinetobacter species and many β-lactamase— producing Enterobactericeae.6 Eravacycline is an intravenous fluorocycline that has demonstrated noninferiority to meropenem and ertapenem in 2 randomized controlled trials (IGNITE1 and IGNITE4) investigating clinical response in complicated intra-abdominal infections.7 In contrast, the IGNITE2 and IGNITE3 studies did not achieve prespecified noninferiority margins with eravacycline compared with levofloxacin and ertapenem for the treatment of complicated urinary tract infection (cUTI), raising the possibility of suboptimal dosing in the context of low bioavailability and urinary elimination.8,9 Omadacycline is an intravenous and oral aminomethylcycline that investigators determined to be noninferior to linezolid in terms of early clinical response with skin and skin-structure infections in the OASIS-1/2 studies. Investigators also compared it with moxifloxacin in patients with community-acquired bacterial pneumonia in the OPTIC study. Omadacycline was noninferior to moxifloxacin, though results showed a higher number of deaths among patients taking omadacycline, particularly in patients older than 65 years.10 Two ongoing trials are seeking to expand its approved indications to cystitis and pyelonephritis.6

Eravacycline and omadacycline may be valuable for patients with allergies or drug—drug and drug–disease interactions that preclude the use of other agents, those at particularly high risk of Clostridioides difficile, and those who desire a single agent with activity against anaerobes, atypicals, and MRSA.10 They also have potential advantages compared with tigecycline, including better gastrointestinal tolerability and, for omadacycline, a once-daily oral formulation and lower volume of distribution that translates into higher serum and epithelial lining fluid concentrations.6,9,11 Eravacycline in particular often displays more potent in vitro activity against extended- spectrum β-lactamase (ESBL)-producing and carbapenem-resistant Enterobacteriaceae (CRE) and Acinetobacter baumannii than does tigecycline, making it a theoretical option for patients with limited choices.5,9,12 The clinical role for both agents in off-label indications with different pathogens or sites of infection requires more study.

Plazomicin is a new semisynthetic aminoglycoside with activity against a wide spectrum of gram-negative pathogens, including ESBL-producing organisms and CRE.13 It has less potent activity against Pseudomonas aeruginosa and Acinetobacter species, displaying similar activity as that of amikacin.8 It is approved for cUTI, based on the results of the phase 3 noninferiority EPIC trial, which compared plazomicin and meropenem for cUTI including pyelonephritis.14 Plazomicin investigators also conducted a study specific to the treatment of infections caused by non—New Delhi metallo-β-lactamase CRE. The CARE trial consisted of 2 phases of study. The first randomized patients to plazomicin or colistin in combination with either tigecycline or meropenem, and the second was a single-arm investigation of plazomicin with investigator-selected adjunctive antibiotics. This trial ended prematurely because of low enrollment, but the subgroup analysis of CRE bloodstream infections suggested that plazomicin may be associated with a lower mortality rate compared with colistin.13,14

Like other aminoglycosides, plazomicin maintains the adverse effect profile of nephrotoxicity and ototoxicity. The prescribing information recommends maintaining a trough concentration <3 μg/mL to minimize the risk of nephrotoxicity, though some data suggest that a trough concentration >2 μg/mL may be the threshold for nephrotoxicity.14 Given plazomicin’s demonstrated efficacy in treating cUTI caused by multidrug-resistant Enterobacteriaceae and its once-daily dosing scheme, the agent’s role in therapy may likely be best suited for patients with serious β-lactam allergies that would preclude BLBLI use or to those seeking a simpler administration alternative to that of BLBLIs or carbapenems for resistant gram negatives with confirmed susceptibility. In addition, although none of the new BLBLIs have activity against metallo-β-lactamases, plazomicin may have activity against Verona integron-encoded and inosine monophosphate metallo-β-lactamases.9 More information about its role in this context is needed.

Rifamycin SV MMX is an oral, minimally absorbed antimycobacterial that was recently approved for the treatment of traveler’s diarrhea (TD). SV MMX was shown to be noninferior to ciprofloxacin in treating nondysenteric TD and was not associated with an increase in colonization rates with ESBL-producing bacteria.15 Although the clinical impact of this resistant carriage is not entirely clear, SV MMX does have several advantages in terms of adverse effects compared with fluoroquinolones and macrolides, and it could be considered an alternative for patients with contraindications to their use.

Recent years have seen the approval of several classes of new antimicrobials, each with a potential niche that needs to be defined in light of cost and stewardship concerns. Eravacycline, omadacycline, plazomicin, and rifamycin expand the options for treating resistant infections.

The Society of Infectious Diseases Pharmacists (SIDP) is an association of pharmacists and other allied healthcare professionals who are committed to promoting the appropriate use of antimicrobial agents and supporting practice, teaching, and research in infectious diseases. We aim to advance infectious diseases pharmacy and lead antimicrobial stewardship in order to optimize the care of patients. To learn more about SIDP, visit sidp.org. 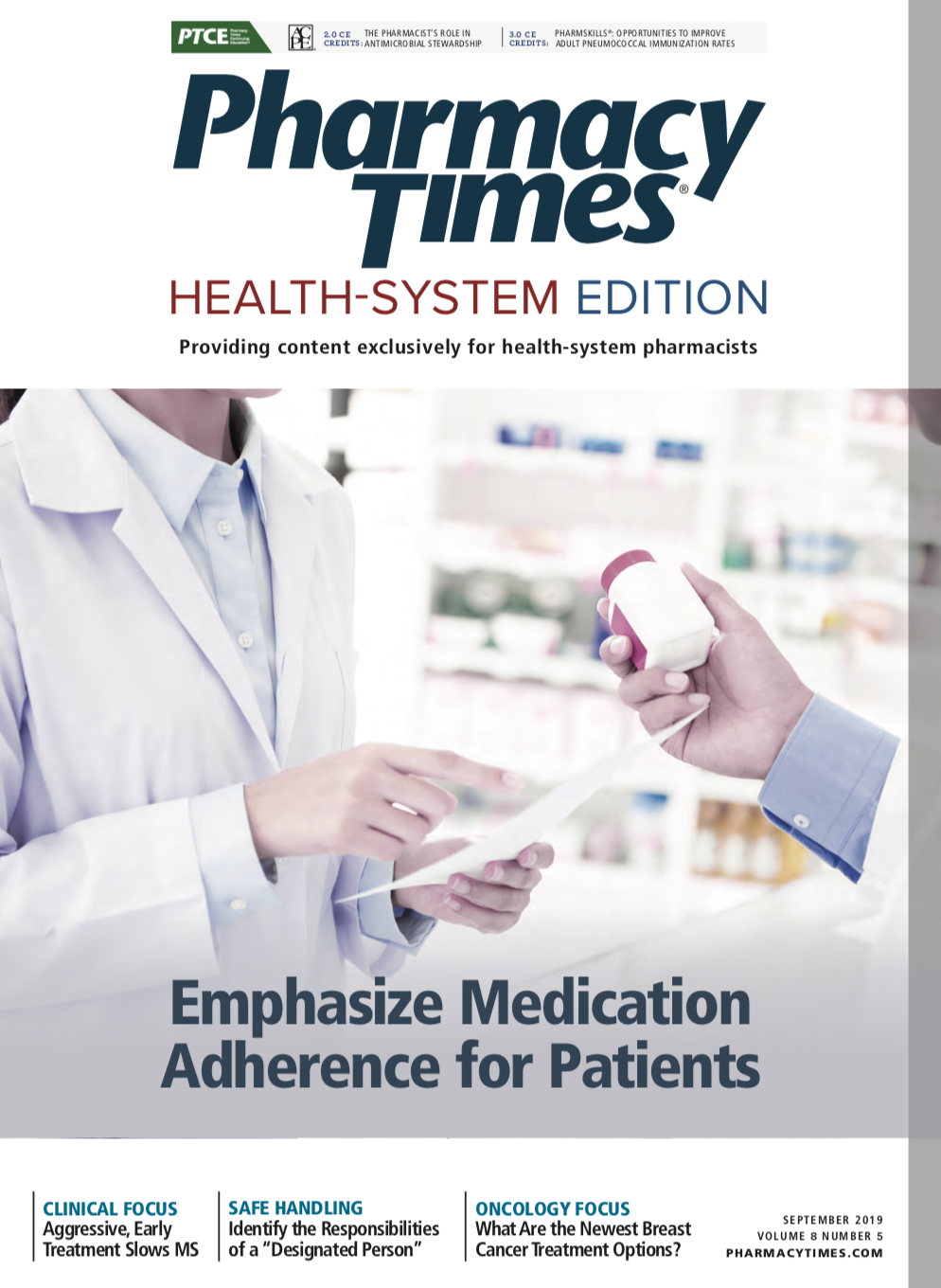