Multiple sclerosis (MS) is an inflammatory disease of the central nervous system affecting 250,000 to 350,000 people in the United States.1,2 It is believed that activated T cells proliferate, cross the blood—brain barrier, and enter the central nervous system (CNS), where they launch an immune attack on the myelin sheath.3 MS is more frequently identified in women, Caucasians, and those of Northern European descent and is usually diagnosed between 20 and 45 years of age.1 Genetics, environmental factors, and geography have all been implicated in its development; however, a definitive etiology has not been identified.2

There are 4 identified courses of disease: relapsing-remitting MS (RRMS), primary-progressive MS, secondary-progressive MS, and progressive-relapsing MS.2 RRMS is the most common type and is characterized by periods of acute attacks that eventually remit over the proceeding weeks to months.2

Diagnosis of MS is based largely on the clinical picture. An acute onset of neurological symptoms, such as sensory disturbances or unilateral vision loss, is suggestive of demyelinating disease.3 Cerebrospinal fluid analysis and magnetic resonance imaging (MRI) may be utilized to gain diagnostic clarity.2

MS exacerbations occur when a patient experiences an acute worsening of previously experienced neurologic symptoms or emerging symptoms for at least 24 hours. The cornerstone of treatment for acute attacks is high-dose corticosteroids. The Optic Neuritis Treatment Trial demonstrated the benefit of steroids in the acute management of optic neuritis, a common complication of MS.4 This trial demonstrated a hastened recovery from optic neuritis but no long-term functional benefit. There is no consensus on the optimal dose, route, or duration of treatment to manage exacerbations; however, several trials have demonstrated the efficacy of oral or intravenous methylprednisolone in doses of 500mg to 1000mg for 3 to 5 days.5

Disease-modifying therapy is targeted at decreasing the number of acute attacks and preventing long-term disability. The agents considered first line for relapsing forms of MS at the time of publication of the American Academy of Neurology (AAN) guidelines in 2002 were beta interferons and glatiramer acetate.5 These make up the ABC-R therapy of MS, which stands for Avonex (interferon b-1a), Betaseron (interferon b-1b), Copaxone (glatiramer acetate), and Rebif (interferon b-1a). The dosing, frequency, and route of administration of these injectable agents are listed in the Table. 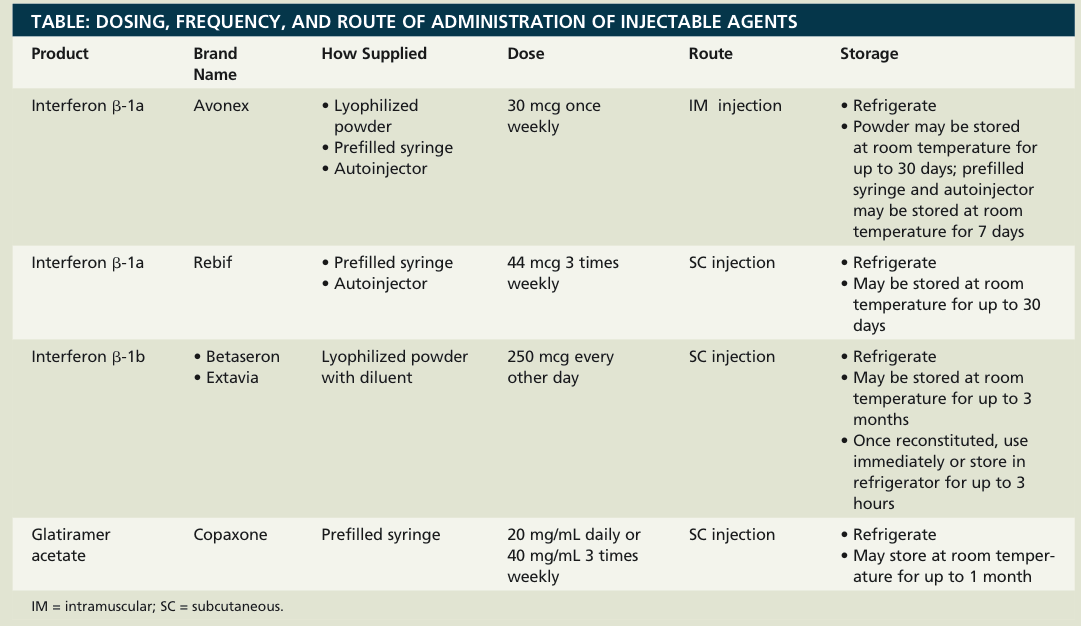 Move your cursor over the image to enlarge it.

Interferons have several immunomodulatory effects and are theorized to have antiproliferative actions. The exact mechanism by which they exert their therapeutic effect in MS is not clearly defined.5 Interferons have been shown to reduce attack rate, improve MRI measures, and possibly slow sustained disability progression; however, they do not come without serious adverse effects.5 Flu-like symptoms, depression, nausea, and headache have been reported with their use.5 Additionally, patients may develop neutralizing antibodies that may result in a loss of therapeutic efficacy.5

Glatiramer possesses immunomodulatory effects, but like interferons, the mechanism of effect in MS has not been fully elucidated.6 Glatiramer has been shown to reduce clinical and radiologic evidence of attacks, produce beneficial outcomes on MRI measures of severity, and sometimes slow sustained disability progression.6 Common adverse effects include injection site reactions and, less commonly, lipoatrophy.6 A small number of patients may develop a nonrecurring, self-limiting reaction that consists of flushing, shortness of breath, chest tightness, and palpitations.6

Other parenteral disease-modifying agents include natalizumab (Tysabri), which was approved in 2004 for relapsing forms of MS, and mitoxantrone (Novantrone). Natalizumab is a monoclonal antibody thought to block entry of inflammatory cells into the CNS.7 Trials have demonstrated significantly reduced annualized relapse rates and progression to disability in natalizumab-treated patients compared with placebo.7 Despite the available evidence supporting the efficacy of natalizumab, its use has been associated with an increased risk of developing progressive multifocal leukoencephalopathy (PML). The Tysabri Outreach: Unified Commitment to Health prescribing program is the risk evaluation and mitigation strategy (REMS) program associated with natalizumab that has been developed in an effort to maximize patient safety and reduce the risk of developing PML. Other adverse effects to natalizumab include hypersensitivity, headache, opportunistic infections, and the development of anti-natalizumab antibodies.7 Due to the risk of PML, natalizumab use is reserved for patients who have failed or are unable to tolerate other therapies.8 Currently, there is insufficient evidence to comment on the relative efficacy compared with other disease-modifying agents.7

Mitoxantrone, an anthracycline, has limited use in MS due to risks of cardiotoxicity. The FDA added a black box warning to the prescribing information to ensure appropriate evaluation and monitoring for cardiac disease. The maximum lifetime cumulative dose of mitoxantrone is 140 mg/m2.9

Fingolimod (Gilenya), the first oral anti-MS drug, was approved in 2010.10 Its proposed mechanism of action is through sequestration of leukocytes in lymph nodes.10 Fingolimod has demonstrated reduced relapse rates compared with interferon b-1a, and in 1 of 2 studies demonstrated reduced risk of disability compared with interferon b-1a.10 Adverse reactions include bradyarrhythmia and atrioventricular blocks, infections, macular edema, respiratory effects, and liver enzyme elevations.10 Due to severe bradyarrhythmias associated with the first dose of fingolimod, a REMS program has been enacted requiring patients to undergo electrocardiogram and blood pressure monitoring for 6 hours after their first dose.10 The current AAN guidelines do not include fingolimod on the treatment algorithm since this agent was only recently approved, but the National Institute of Clinical Excellence and European Medicine Agencies recommend its use in patients with repeated relapses with interferon therapy or those with severe or rapidly progressing disease.11,12

Teriflunomide (Aubagio) is another oral anti-MS agent approved in 2012 for relapsing forms of MS and is the active metabolite of leflunomide.13 Its exact mechanism of action in MS is unknown, but it possesses immunomodulatory and anti-inflammatory properties.13 Teriflunomide significantly reduced the time to disability as well as decreased MRI measures of disease in studies compared with placebo. There are serious risks of hepatotoxicity and birth defects, which may persist for up to 2 years following drug cessation due to its long half-life.13 It is labeled pregnancy category X and both men and women should use effective contraception during treatment.13

Most recently, in 2013, another oral agent, dimethyl fumarate (Tecfidera), was added to the disease-modifying arsenal for MS. Dimethyl fumarate demonstrated reduced relapses, progression to disability, and lesions on MRI compared with placebo.14 Lymphocytopenia, gastrointestinal effects, and flushing were the most commonly reported adverse effects in trials thus far.14 The reduced rates of serious adverse effects and oral dosing may lead to dimethyl fumarate being considered an attractive option in the future.

Although several advancements have been made to reduce disability and relapse rates, many patients still suffer from significant symptoms of their disease. Fatigue, walking impairment, spasticity, and psychological disorders plague many patients and reduce their quality of life. Fatigue may be treated with modafanil, amantadine, and stimulants.5 Dalfampridine (Ampyra) was recently approved to help treat walking impairments associated with MS by enhancing conduction along demyelinated nerve fibers.5 Spasticity may be treated with baclofen, tizanidine, or diazepam. Recently, an oromucosal spray product containing delta-9-tetrahydrocannabinol and cannabidiol was approved in several European countries for the treatment of spasticity associated with MS.5,15 Psychological disorders including depression are complications of the disease, and of interferon treatment as well. Depression should be treated aggressively and interferons should be avoided in patients with severe depression.

In conclusion, management of MS includes management of acute exacerbations with corticosteroids, use of disease-modifying agents to help slow the progression of disability and prevent relapses, and symptomatic treatment to address ongoing disability and improve quality of life. 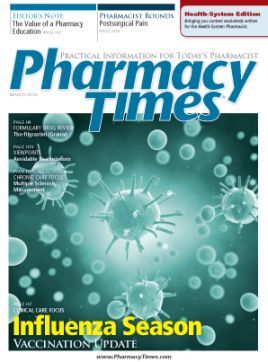