The message from the US Centers for Disease Control and Prevention (CDC) is clear: everyone 6 months and older should get this year's flu vaccine. 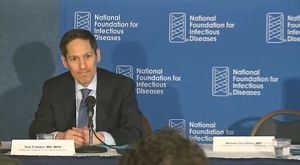 The message from the US Centers for Disease Control and Prevention (CDC) is clear: everyone 6 months and older should get this year’s flu vaccine.

This includes CDC director Tom Frieden, MD, MPH, who rolled up his sleeve and smiled while he got his flu shot during a recent press conference that provided a recap of last year’s flu season, information about the 2015-2016 flu season, and additional details about the importance of getting vaccinated.

National Foundation for Infectious Diseases (NFID) medical director William Schaffner, MD, reinforced that every flu season is a unique experience. While strains are tracked all year long to prepare the best vaccine for the upcoming season, influenza remains unpredictable.

This was especially true last year when the strains mutated, leaving the vaccine much less effective than typical flu vaccines that have an efficacy rate around 50% to 60%.

H3N2, the predominant strain last season, was poorly matched with last year’s vaccine strain. The CDC saw that particular strain gain strength only after the vaccine had already been produced.

Last year also saw the highest-ever rate of flu-related hospitalization documented among seniors, according to Dr. Frieden. In addition, 145 children died as a result of the flu last year, though Dr. Frieden noted that this is an underestimate of the actual number of pediatric flu-related deaths.

On a brighter note, flu vaccination rates increased among health care providers, adults, and pregnant women. Dr. Frieden gave credit especially to pharmacists, who had an immunization rate of around 95%.

Although almost half of all Americans received the flu vaccine last year, Dr. Frieden said there was room for improvement, especially in certain populations like pregnant women and long-term care facility workers.

So far, it looks as though the virus causing early disease this season are “exactly as predicted,” Dr. Schaffner reported.

With that in mind, the CDC anticipates this year’s vaccine to be a much better match to the flu strain, thanks in part to global collaboration.

Dr. Frieden explained that the CDC works with other countries, particularly those in the southern hemisphere, to see which strains have been circulating, since that information can serve as a good prediction of what is to come in the United States. Furthermore, more flu vaccine is being produced than ever before, and around 40 million doses have already been distributed.

Dr. Frieden said that now is a good time to get vaccinated, but any time is a good time during the flu season, and it doesn’t matter which vaccine patients get.

He emphasized that even in a “good” year, the flu causes millions of cases of illness, hundreds of thousands of hospitalizations, and thousands of deaths.

“The flu is unpredictable, but you can predict that the single best thing you can do is get a flu vaccine,” Dr. Frieden said. “Make it the norm to get the flu vaccine this year and every year, just as I do.”

While influenza can be volatile, the methods to prevent it are constant.

Beyond getting vaccinated, patients should cover coughs and sneezes, stay home when they’re sick, and take antivirals if a physician prescribes them. Dr. Frieden noted that antivirals are a second line of defense that can shorten the duration of the flu by around 1 day and reduce severity of the illness.

Why Americans Avoid the Flu Shot

Kathleen Neuzil, MD, MPH, professor of medicine and director of the Center for Vaccine Development at the University of Maryland School of Medicine, addressed and countered some of the reasons why Americans skip the flu shot.

One reason is some Americans may not know that the CDC recommends flu immunization for everyone 6 months and older, she said.

Others may consider themselves invincible because they eat right, exercise, and feel healthy. Despite this, young, healthy people can get the flu and transmit the virus.

“We are the transmitters in the community,” Dr. Neuzil said.

Dr. Neuzil also pointed to time as a barrier. Everyone is busy, but there is no excuse not to get the flu vaccine when it is available in local pharmacies and often in workplaces, she said.

Those who dislike needles can opt for the intradermal vaccine, which is a smaller needle, or get a nasal vaccine. Individuals with egg allergies can obtain the recombinant version, Dr. Neuzil noted.

The flu vaccine does not just provide protection for the vaccinated individual, as one person’s immunization can help protect young children, seniors, and those with cancer or serious lung diseases.

“Protecting others should be as compelling as protecting yourself,” she said.

Children and the Flu

With their curiosity and tendency to mingle with other kids on playgrounds and in school, children can easily get infected with the flu. Plus, children younger than 5 are more likely to be hospitalized, Dr. Swanson warned.

She has seen children with the flu experience febrile seizures, wheezing, asthma, weight loss, and almost 2 weeks of missed school.

Last year, 75% of infants and toddlers were immunized against the flu, Dr. Swanson noted.

She also read an American Academy of Pediatrics (AAP) statement responding to a GOP debate discussion on September 16, 2015, surrounding vaccines and autism.

In the statement, AAP emphatically stated that there was no link between autism and vaccines. AAP also noted that alternative vaccine schedules do not make vaccines safer and instead leave children with more windows of time to get sick.

Dr. Frieden added that the false information surrounding vaccines and autism are interfering with scientists discovering what actually causes autism.