Milk thistle is a herbal product widely used in the United States and around the world. 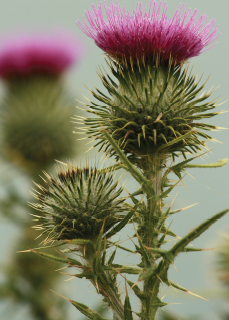 Milk thistle (Silybum marianum) is a herbal product widely used in the United States and around the world. The extract of the seeds of milk thistle contains a number of substances, collectively called silymarin. Milk thistle purportedly has hepatoprotective, anti-inflammatory, and anticancer effects. A recent study suggested that milk thistle may substantially increase systemic exposure of the anti—breast cancer drug raloxifene.1

Studies of milk thistle coadministered with various drugs in humans suggest it is unlikely to affect the most common cytochrome, the P450 (CYP450) isozyme. In a pharmacokinetic study, 9 healthy subjects were given 4 probe drugs—caffeine, tolbutamide, dextromethorphan, and midazolam&mdash; to test for the effect of milk thistle on CYP1A2, CYP2C9, CYP2D6, and CYP3A4.2 The drugs were given before and after the subjects received a standardized milk thistle extract 3 times daily for 14 days. Milk thistle had no effect on any of the drugs.

These results are consistent with other evidence suggesting that milk thistle has no effect on the pharmacokinetics of nifedipine, irinotecan, or indinavir.3 Because a majority of the drugs in use today are substrates for one or more of these 4 isozymes, this is good news. Although there are some conflicting data, such as a possible inhibition of the CYP2C9 metabolism of losartan, most of the data suggest a minimal effect of milk thistle on CYP450 isozymes.

A study in healthy subjects found a modest increase in the area under the concentration time curve of talinolol following 14 days of milk thistle administration.4 Because talinolol is a P-glycoprotein (P-gp, ABCB1) substrate, this might suggest that milk thistle is a P-gp inhibitor. Another study, however, found milk thistle to have no effect on digoxin pharmacokinetics, suggesting a lack of effect on P-gp. Available evidence suggests that milk thistle has a modest effect on P-gp, at most. More study is needed to confirm this.

Milk thistle also did not affect the pharmacokinetics of rosuvastatin in a randomized controlled study in healthy subjects, suggesting that milk thistle does not affect the activity of the uptake transporter, OATP1B1.5

How should we deal with preliminary information such as this? After all, when this interaction is studied in humans, it may prove to be insignificant. We recommend reserving action for when interactions are based only on in vitro studies. Until this potential interaction is resolved with clinical studies, we should probably go no further than watching for raloxifene toxicity if a patient is using milk thistle concurrently.

Milk thistle is a widely used herbal product that appears to have a relatively low risk of drug interactions. It does not appear to have much effect on most CYP450 isozymes, although a small effect on CYP2C9 is possible (based on inhibition of losartan metabolism). Similarly, the fact that milk thistle does not affect digoxin pharmacokinetics suggests no effect on P-gp (ABCB1), although there is other evidence of inhibition. Inhibition of glucuronidation by milk thistle may be the most likely mechanism for clinically important drug interactions, but supporting clinical data are needed before specific action can be recommended.