The approval of ipilimumab and vemurafenib in 2011 marked a significant advance in the treatment of melanoma, and a number of new investigational agents are in the pipeline.

With 76,690 new cases and 9480 deaths estimated in 2013, melanoma will be the fifth-and seventh-most common malignancy among men and women, respectively.1 The incidence rate of melanoma increased by approximately 2.8% per year between 2005 and 2009. When diagnosed early at a localized stage (84% of cases), it is generally a curable disease with surgical excision having a 5-year survival rate of 98%. The survival declines significantly to 62% for regional disease and to 15% for metastatic disease (Table 1).13

The FDA approval of ipilimumab and vemurafenib in 2011 marked the most significant advances in the treatment of melanoma since the advent of dacarbazine and interleukin-2 (IL-2) in 1975 and 1998, respectively. Conventional chemotherapy treatment with dacarbazine or temozolomide led to unsatisfactory results (10% to 20% response rate), while responses to immunotherapy with IL-2, even though durable in certain cases, were low (16%).2 The lack of improvement in overall survival (OS) and the significant associated toxicities limit the use of IL-2 to patients with good performance status and preserved organ function.

On the other hand, ipilimumab and vemurafenib have proved to be quite active and have improved OS compared with traditional chemotherapy. These agents not only changed the way we currently treat metastatic melanoma, but also earned the category 1 recommendation by the National Comprehensive Cancer Network. Additional preferred options are a clinical trial and high-dose IL-2. Other active agents include dacarbazine, temozolomide, imatinib (for c-kit mutated tumors), paclitaxel alone or in combination with carboplatin, and dacarbazine- or temozolomide-based chemotherapy or biochemotherapy (Table 2).14

Ipilimumab is a recombinant, human monoclonal antibody which upon binding to the cytotoxic T-lymphocyte associated antigen 4 (CTLA-4) on the surface of T cells blocks the effects of the negative T-cell regulator CTLA-4. This causes an enhanced T-cell activation and proliferation which leads to increased T-cell-mediated activity against tumor cells (Figure).6 The approved dosing schedule is 3 mg/kg intravenously over 90 minutes every 3 weeks for 4 doses. Ipilimumab earned FDA approval following the results of 2 phase III trials. It was shown to prolong OS by approximately 3.6 months when given alone or in combination with a vaccine to patients with previously treated metastatic mela- noma.12 In a separate study, compared with dacarbazine and placebo, ipilimumab given in combination with dacarbazine increased OS by 2.1 months.16 The side effects associated with ipilimumab are a consequence of the immune system activation and they may affect the skin, gastrointestinal tract, liver, and the endocrine system (Table 3). Generally, these are responsive to dose interruption, discontinuation, or the use of corticosteroids or other immunosuppressants such as infliximab in more severe cases. Even though they may be reversible, these side effects are life threatening if not promptly addressed.17 Patients should be counseled to report any increased bowel movements (including incontinence), black, bloody, or clay stools, nausea, and vomiting causing inability to take fluids by mouth, abdominal pain, cramping, or bloating.

Although durable once achieved, the response to ipilimumab is usually delayed by approximately 13 weeks (mean time). This characteristic made it the preferred agent for patients with a lower tumor volume and who are less symptomatic. Also, instead of the traditional Response Evaluation Criteria in Solid Tumors, new immune-related response criteria were developed.19 These criteria would evaluate the total disease burden independently of the appearance of new lesions and allow it to increase up to 25% from baseline before being deemed disease progression.

Approximately 7% of all cancers and 45% of the patients diagnosed with metastatic melanoma carry a mutated BRAF.7 This intracellular kinase is part of the RAS-RAF-MEK-ERK MAP kinase signaling pathway which regulates cell survival, growth, and differentiation in response to growth signals (Figure). A mutated BRAF leads to constitutive activation of this pathway resulting in dysregulation of these processes and malignant transformation.7,11,18 The treatment with the BRAF inhibitor vemurafenib is based on the detection of the V600E mutation, which occurs in approximately 97% of mutated BRAF cases. This detection is performed with the aid of the Cobas 4800 BRAF V600 diagnostic test, which received FDA approval alongside the drug. 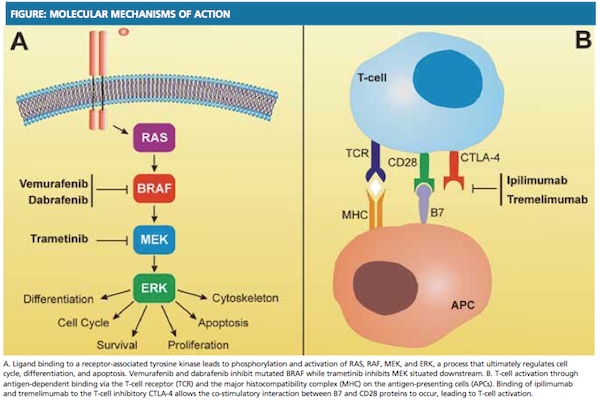 Vemurafenib was shown to improve median OS by 3.6 months in a phase III trial (BRIM3), which compared it with dacarbazine in previously untreated patients carrying the BRAFV600E mutation.3,4 The FDA-approved dose is 960 mg orally twice daily, and it may be taken with or without a meal. No dose adjustments are required for mild and moderate renal or hepatic dysfunction. In severe impairment it should be used with caution. Arthralgia and dermatologic side effects were most commonly reported, and secondary skin cancers may also occur (Table 3). Liver function tests as well as baseline and regular electrocardiogram monitoring are recommended throughout therapy. Patients should be advised to avoid sun exposure as much as possible, as this could lead to skin burns. Concomitant use of narrow therapeutic drugs metabolized by CYP1A2, CYP3A4, and CYP2D6 is not recommended, as their levels may be significantly altered by vemurafenib. Moreover, since vemurafenib is a substrate of CYP3A4, strong CYP3A4 inducers or inhibitors should be used with caution. Close monitoring of INR is recommended when the patient is also receiving warfarin.

Unlike ipilimumab, the rapid response seen with vemurafenib made it the preferred choice for patients with a mutated BRAF, higher disease burden, and symptomatic disease. However, the response seen with vemurafenib does not last long due to the development of treatment resistance. The median time to progression is less than 7 months, with some patients progressing aggressively after the initial response. Fortunately, promising new agents and combination regimens are currently undergoing clinical trials or are waiting to be tested.

Trametinib is an oral inhibitor of MEK protein which lies downstream of BRAF in the MAP kinase signaling cascade. Trametinib was also shown to improve progression-free survival (PFS) and OS of patients with metastatic melanoma carrying the V600E or V600K BRAF mutations compared with chemotherapy consisting of either dacarbazine or paclitaxel.8 The side effect profile of trametinib is quite different than that of vemurafenib, commonly including rash, diarrhea, peripheral edema, pruritus, and dermatitis. Squamous cell carcinoma has not been reported in the treated population. Currently, a New Drug Application is being reviewed by the FDA for the treatment of metastatic melanoma.

Dabrafenib, a second oral BRAF inhibitor, improved the median PFS (5.1 vs 2.7 months) of patients with BRAFV600E-mutated metastatic melanoma in a phase III trial which compared it with dacarbazine.11 More data are required for overall survival analysis. Skin-related side effects as well as fever, fatigue, arthralgia, and headache were most commonly reported with dabrafenib.

A phase I/II trial evaluated the safety and efficacy of combining dabrafenib and trametinib in metastatic melanoma patients with V600E- and V600K- mutated BRAF.9 Compared with dabrafenib monotherapy, the combination improved PFS (9.4 vs 5.8 months) while the response rate was increased from 54% to 76%. Median OS had not been reached at the time of the evaluation. In the dual therapy group, there were fewer proliferative skin lesion reports, while fever, nausea, and vomiting were more common.

A head-to-head phase III trial of vemurafenib against combination treatment with dabrafenib and trametinib is currently under way.5 Future trials will attempt to establish the place in therapy of the BRAF and MEK inhibitors alone or in combination.

Tremelimumab, another CTLA-4 inhibitory antibody with a mechanism of action similar to that of ipilimumab, has disappointed in a phase III trial which compared it with chemotherapy (temozolomide or dacarbazine).15 Although the response duration was significantly longer with tremelimumab (35.8 vs 13.7 months), it failed to show a significant improvement in OS. However, certain aspects of the trial design might have contributed to the negative results. The most common adverse events reported with tremelimumab were diarrhea, rash, pruritus, and fatigue. Future trials will attempt to confirm whether tremelimumab could lead to a meaningful benefit in the treatment of melanoma.

Pharmacists play a vital role in the care of patients undergoing treatment with these new agents, both in the outpatient and the inpatient settings. Pharmacists should identify potential drug interactions and counsel patients regarding compliance, potential side effects, their management, and when to contact their physician. Although vemurafenib is not typically present on hospital formularies or initiated during inpatient stay, pharmacists may facilitate access to the medication by proactively investigating patients’ insurance coverage and the procurement from specialty pharmacies.

More questions lie along the way with these breakthrough therapies for metastatic melanoma. What is the best agent in the first-line treatment? Is there an optimal way in which these agents may be used sequentially? Would a combination regimen yield better responses with fewer side effects? Will new agents be added to the current armamentarium? Finally, will these agents have a role in the adjuvant setting? These are exciting times in the treatment of melanoma and the near future will answer all of these questions.

Dragos Plesca, PharmD, PhD, graduated from University of Medicine and Pharmacy “Carol Davila” in Bucharest, Romania, and completed both his pharmacy practice and hematology/oncology specialty residencies at the Cleveland Clinic in Cleveland, Ohio. He currently works as a hematology/oncology clinical pharmacy specialist at Carolinas Medical Center and Levine Cancer Institute in Charlotte, North Carolina.