The pharmacy benefit has begun to attract greater attention due to the increase in medications that are available and their cost. It is time we refocus on the needs of the patient and push ourselves and the benefit managers to evolve into a single integrated management and distribution model.

The world is confused—no, this column is not about politics&mdash;rather, I asked 20 people I know what they believe a “pharmacy benefit” covered, and all but 1 of them stated that they believed “benefit” covered all the medications that they are taking. They did not say that it covered only those medications paid for by the pharmacy benefit or only those that are pills; they perceived this as a benefit that singularly addressed all of their medicines.

It is time that we listen to the consumer. I would suggest that those who make benefit decisions should start to think of the benefit the same way their employees and families think about it. Today it is often 3 different organizations that are overseeing, managing, and potentially distributing a person’s medications: one for traditional small molecule medications, a second that does similar activities for self-administered biologics, and a third that manages infused medications.

This is commonly known as the “best in class” model. A second model uses a 2-organization approach, with 1 organization to oversee, manage, and distribute the traditional pharmacy benefit medications and self-injectables (these are paid for under the pharmacy benefit), but they do not have any direct interaction with those medications that are infused and often delivered through the physician’s office or hospital (these are most often covered under the medical benefit).

Companies where you see this most often are organizations such as CVS Health or Express Scripts/Accredo. Recently, some of these organizations have also begun to interject themselves in the management of the infusible “medical benefit medications.” I would suggest that this is a model that is beginning to align itself with the public’s view of what a pharmacy benefit should be. I would also suggest that this management model still has a long way to go.

Although one company may be responsible for all the management of medications regardless of payment source, none of them have a total patient-centric view of the medications. In fact, they often have little or no overlap of clinical or administrative teams and often do not have a single view of the patient in their systems or data. It is time that the pharmacy world begins to address care coordination and management the same way we are asking the medical community to do so.

Imagine a patient that had multiple sclerosis with common comorbidities of diabetes and depression. In order for this patient to have optimal outcomes and feel their best, it is important that a single person or team be responsible for the entirety of the medication management.

The following are just a few things that should be considered with a patient such as this:

Are any of these medications negatively interacting?

Do any of these medications cause side effects that could impact 1 or more of the comorbidities?

Is the patient adherent to all their medications?

If the patient cannot afford to take all the medications, which are the most important?

The pharmacy benefit has begun to attract greater attention by the public over the last few years for a number of reasons, including the increase in medications that are available and the cost of many of these medications.

It is time we push ourselves and the benefit managers to evolve the model into a single integrated management (and when possible distribution) model. I believe this would better address the needs of the patient, as well as the needs of society. What do you think? 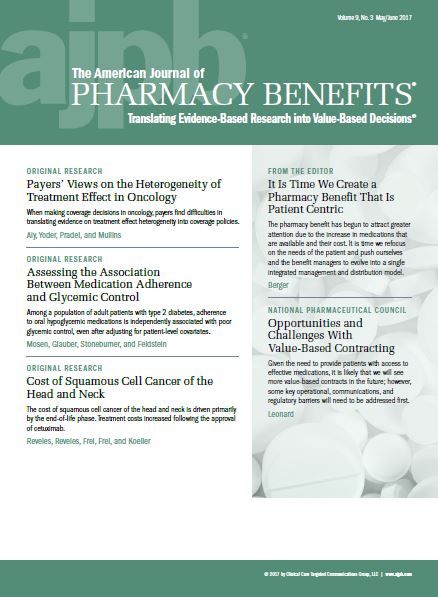