Vulvovaginal atrophy, a component of the genitourinary syndrome of menopause, is characterized by a range of symptoms associated with the declining levels of estrogen among postmenopausal women.

This article was sponsored by AMAG Pharmaceuticals.

Vulvovaginal atrophy (VVA), a component of the genitourinary syndrome of menopause, is characterized by a range of symptoms associated with the declining levels of estrogen among postmenopausal women. These include vaginal dryness, burning, and itching; dysuria, or painful urination; recurrent urinary tract infections; and dyspareunia, or painful sexual intercourse.1-3 As a result of declining estrogen levels, physiologic changes in the vulvovaginal area may lead to increased pH and loss of lubrication, elasticity, and pliability in vaginal tissue, causing

dyspareunia.2-4 VVA symptoms, including dyspareunia, are progressive and may not resolve without effective treatment.3

The REVIVE and EMPOWER surveys evaluated the prevalence and impact of VVA symptoms, perceptions and awareness of VVA and its associated symptoms, knowledge of treatment options, frequency of unmet needs, and barriers to awareness and effective treatment.2,3 Of the 10,390 postmenopausal women surveyed across REVIVE (N = 8081) and EMPOWER (N = 2309), at least 1 VVA symptom was experienced by 38% and 80% of women in each survey, respectively. Among those with at least 1 VVA symptom, 44% and 59% reported experiencing dyspareunia in the REVIVE and EMPOWER surveys, respectively.2,3 Additionally, more than half of postmenopausal women with dyspareunia in the EMPOWER survey rated their discomfort as moderate to severe (54%).2 Despite the prevalence of moderate to severe dyspareunia as a VVA symptom in postmenopausal women, these surveys also revealed that a substantial number of women were unaware of both VVA as a condition and its available treatment options, and therefore remained untreated.2 In the EMPOWER survey, fewer than 40% of women surveyed were aware of VVA as a condition, and half of women with VVA symptoms had never received treatment.2

Surprisingly, only about half of women in the REVIVE (44%) and EMPOWER (56%) surveys had conversed with their health care provider (HCP) regarding their VVA symptoms.2,5 Barriers to this discussion were highlighted in the EMPOWER study, in which 18% of women reported that they were uncomfortable discussing their symptoms, 13% shared that they were unaware of treatment options for their symptoms, and 42% believed that VVA was a natural part of aging, with which they should live.2 Importantly, failure of HCPs to initiate conversations regarding VVA during routine visits was also highlighted. For women who had talked to their HCPs about VVA, fewer than 15% of conversations were initiated by the HCP.2,5 Discouragingly, HCPs mentioned to 20% of women that VVA symptoms were a normal part of aging with which they should learn to live.2 Overall, the REVIVE and EMPOWER surveys have revealed the need for a better understanding of both VVA and available treatment options among patients and HCPs.

INTRAROSA® is a steroid indicated for the treatment of moderate to severe dyspareunia, a symptom of VVA, due to menopause.6 INTRAROSA® is a once-daily 6.5-mg intravaginal insert of prasterone that should be administered using the provided applicator every night at bedtime in either the lying or standing position.6 Although the mechanism of action of INTRAROSA® is not completely understood, prasterone is a synthetic version of an inactive endogenous steroid that is converted into androgens and estrogens.6

The efficacy of INTRAROSA® was established across four phase 3 clinical trials in postmenopausal women who reported moderate to severe dyspareunia as their most bothersome symptom of VVA. Patients treated with INTRAROSA® achieved improvements in all FDA-designated co-primary efficacy end points, which included the physiologic markers of VVA (increased percentage of vaginal superficial cells, decreased percentage of parabasal cells, and decreased vaginal pH) and reductions in the severity score for dyspareunia.6-9 In a combined analysis across three 12-week clinical trials, INTRAROSA® treatment decreased the severity score of dyspareunia by an average of 48.9% compared with placebo (P <.0001).8,10-12 In a long-term open-label trial, INTRAROSA® reduced the severity of dyspareunia with a 46.7% decrease in severity score at 12 weeks and a 66.1% total decrease in severity score over the 52 weeks from start of the study (P <.0001).7

Before starting INTRAROSA® treatment, pharmacists should counsel postmenopausal women regarding safety considerations, such as vaginal discharge and abnormal Pap smears.6 Vaginal discharge at the application site, which was attributed to melting suppository leakage, was the most frequently reported treatment-emergent adverse effect (AE) across the 12-week trials, occurring at an average incidence of 5.7% in the INTRAROSA® treatment group.6-8,11,12 In the 52-week open-label clinical trial, AEs which occurred at an incidence of 2% or greater were vaginal discharge (14.2%) and abnormal findings on a Pap smear (2.1%).6 Patients should be advised to speak with their prescriber if they have a current or past history of breast cancer, and if they have undiagnosed abnormal genital bleeding.6

Pharmacists are uniquely positioned to address the unmet need for dyspareunia awareness and to counsel postmenopausal women on available treatment options for dyspareunia, including specific information regarding INTRAROSA® for those with moderate to severe dysparenuia. Given that there often is a failure to initiate conversations around VVA in the postmenopausal population, pharmacists with an understanding of potential barriers to discussing this sensitive condition may be better equipped to initiate conversations with patients when appropriate. Encouragingly, 87% of postmenopausal women in the EMPOWER survey reported they would be likely to talk about their vaginal symptoms if their HCP initiates the conversation.2

Patients who are purchasing over-the-counter products or prescriptions at the pharmacy for the relief of dyspareunia may provide pharmacists with an opportunity to open a discussion about awareness of the condition and available treatment options. After initiating a conversation, the pharmacist can then refer the patient to her HCP for further evaluation, armed with knowledge to ask questions about treatments for moderate to severe dysparenuia such as INTRAROSA®. The TABLE summarizes how to best identify and counsel women who may be at risk of postmenopausal dyspareunia and provides suggestions for opening a dialogue.3,13 Pharmacists have an important role in fostering a positive counseling environment for postmenopausal women and encouraging open discussions regarding dyspareunia and VVA symptoms. 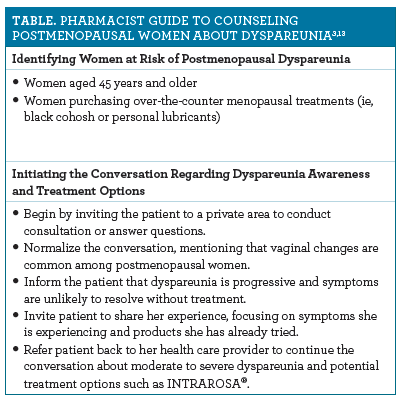 INTRAROSA® is a steroid indicated for the treatment of moderate to severe dyspareunia, a symptom of vulvar and vaginal atrophy, due to menopause.

INTRAROSA® is contraindicated in women with undiagnosed abnormal genital bleeding. 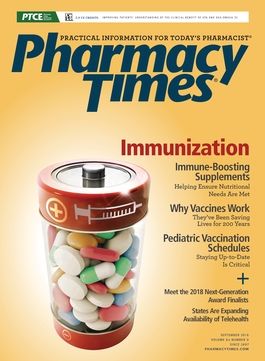