Multiple sclerosis (MS) is of interest because it is one of the most costly neurological diseases and the introduction of the first oral treatments in 2010 amplified high treatment costs of MS even further.

Multiple sclerosis (MS) is a disease in which the immune system attacks the central nervous system, specifically the brain, spinal cord, and optic nerves. More than 400,000 people in the United States are estimated to be directly affected by MS, with approximately 200 new cases being diagnosed each week.1,2 Symptoms of MS can begin any time between the ages of 10 and 80 years, with the average age of onset being 32 years. Women are 2 to 3 times more likely to develop the disease than men.1 Healthcare—related costs of MS are estimated to be more than $10 billion annually in the United States.3

Although MS has no cure, the main goal of treatment is to decrease the frequency of relapses, manage symptoms, improve function, and delay disease progression. Patients are encouraged to incorporate non-pharmacologic therapies, such as physical and occupational therapies, into their treatment plan alongside their drug regimen. According to the Executive Committee of the National Multiple Sclerosis Society, treatment should be initiated immediately after completing diagnostic exams. Disease-modifying therapy (DMT) is most effective when initiated early, to avoid further relapsing events and progressive neurologic damage.3-5

DMTs reduce the frequency and severity of clinical attacks and delay progression of the disease. Clinical studies have demonstrated that on average, patients taking DMTs have nearly 6 out of 10 years with no relapses, compared with 5 out of 10 years for those who did not take DMTs.6 Of the 9 DMTs on the market, 7 are injectible and 2 are newer oral formulations. The first oral formulation, fingolimod, was approved in the United States in 2010.7 The second, terifl unomide, was approved in September 2012.

In 2010, the US Food and Drug Administration (FDA) approved dalfampridine, a potassium channel blocker that enhances conduction in damaged nerves. Dalfampridine is an oral therapy used to improve gait in some patients affected by MS. This new oral MS medication can be used as a monotherapy or in combination with a DMT.

Overall, MS is one of the most costly neurological diseases. In 2012, the average annual cost of prescription drug therapy per patient reached $36,000.8 The introduction of these new oral DMTs promises to increase the annual spend for treatment of MS.9,10 The goal of this study was to quantify the impact of these new oral DMTs on utilization and cost of treatment of MS.

Dalfampridine is known for being widely used off label in walking rehabilitation in non-MS conditions. Therefore, to identify plan members with MS, the study was limited to those who also had at least 1 claim for an MS DMT in the study period.

Treatment costs were defi ned as total pharmacy costs (plan sponsor cost + member copayment) for MS drugs and were measured on a per-utilizer-per-year (PUPY) basis. Member age category was assigned at the beginning of the study.

Prior to the introduction of fi ngolimod, 54.3% of members used interferon and 36.4% used glatiramer therapy. In the 2 years after fingolimod was introduced, glatiramer market share remained stable, while collective interferon use dropped by 8%, matched by fingolimod’s increase (

By October 2012, the DMT market share of fi ngolimod reached 8.6% by prescription volume (

). While growth slowed in the second half of 2012, coinciding with an announcement of a cardiovascular disease safety warning in April 2012, the fingolimod volume still increased.

In addition to the launch of the new expensive oral DMT therapy, costs of established injectible DMTs increased during the 3 years between November 2009 and October 2012. For instance, the PUPY cost of interferons went from $24,977 to $33,163 (32.8% increase) 2 years after the introduction of fingolimod (

The introduction of a new oral MS rehabilitation therapy, dalfampridine affected the already growing cost of MS therapy. As expected, therapy costs increased for those adding dalfampridine to the existing DMT regimen. Members on a combination therapy incurred $5405 more in pharmacy costs in year 2 of the study and $6415 more in year 3 than those taking only DMT. Of the 16,983 members who used DMT therapy in year 1 of the study, the majority, 86.9%, continued on a DMT alone, while 3.6% and 9.2% added dalfampridine or discontinued therapy, respectively (

DMTs represent a sizable portion of the total healthcare expenditures (pharmacy and medical) for patients with MS in the United States, and this cost continues to increase.6 Our analyses demonstrated that the perutilizer cost to treat MS increased during the 3-year study period by 35.6%. The cost of interferon therapy increased 32.8% PUPY and the cost of glatiramer increased by 36.0% PUPY. The increase in the cost of MS treatment was the result of multiple developments in the marketplace. The overall increase in MS treatment costs are a result of multiple marketplace developments. First, fingolimod, which was approved in 2010, became the most expensive first-line therapy. While we found that fingolimod was used by 8.6% of the MS population, it accounted for 10.4% of the overall medication spend. Second, costs of existing therapies, such as interferon and glatiramer, continued to increase. Finally, the FDA approval of dalfampridine in 2010 to improve impaired gait in patients with MS contributed an additional $6415 PUPY to the increased overall pharmaceutical cost in 2012.

The plan member population evaluated in this study was identified based on pharmacy claims alone, as the diagnosis codes from medical claims were not available. However, the inclusion criteria required use of DMT therapy during the 3 years; therefore, most of the members in the cohort are likely to have MS. We could not evaluate clinical outcomes associated with oral or adjunct therapy use and so could not relate the increases in costs to changes in outcomes. Additionally, it should be noted that this analysis used actual costs to the plan sponsor PUPY. These costs are different from the maximum annual costs reported in literature.11 This is due to members initiating and discontinuing therapy throughout the year, which brings the average costs down. For example, with fingolimod, the 2011 annual cost as cited in Journal of Medical Economics was roughly $49,000 per utilizer, but the average PUPY in this study was less than half that, at $21,778.11

Recently published consensus statements concerning management of DMTs for MS detailed the position of a panel of physicians and pharmacists experienced in management of the disease. They concluded that interferons and glatiramer should be considered platform therapies and available to patients on a preferred basis. They also recommended that fingolimod should be restricted with a prior authorization to manage patient access and should only be prescribed by neurologists. Lastly, the panel recommended that treatment with dalampridine should only be conducted with a concomitant DMT and require prior authorization limited to FDA-approved indications.12 The significant safety concerns and the additional cost impact to payers of both dalfampridine and fingolimod will require healthcare professionals to be attentive when prescribing them to patients, but even as clinicians act as judicious stewards of the healthcare dollar, the use of DMTs is likely to grow with the prevalence of MS and success in prolonging the relapse-free life for people with the disease. With the recent approval of terifl unomide and the robust new drug approval pipeline of oral medications, the MS treatment landscape continues to change. The entrance of additional oral immunomodulators will lead to as yet unseen effects, including the potential for an oral medication to be used concurrently with an injectible DMT.13

In our analyses, we found an increase in both the utilization and cost of MS therapies. The introduction of new MS oral medications, fingolimod and dalfampridine, contributed to this increase.

The oral route of administration for fingolimod is considered to be one reason it has captured 8.6% of MS prescription claim volume in the first 2 years following its release. Although growth has slowed following a cardiovascular disease safety warning issued in April 2012, fingolimod has continued to expand its market share. As more members switch from long-established therapy to the newer oral treatment options that are more convenient but also more costly, spend for MS therapy will continue to rise. Costs of existing injectible DMTs increased as well.

This study also demonstrated that introduction of dalfampridine, a new oral MS rehabilitation therapy, affected the growing total cost of MS therapy. Because it is meant to be used in addition to and not instead of the DMT therapy, it increased total MS spend. As other drug treatments become available for use in combination with a DMT, cost of MS therapy will continue to rise. 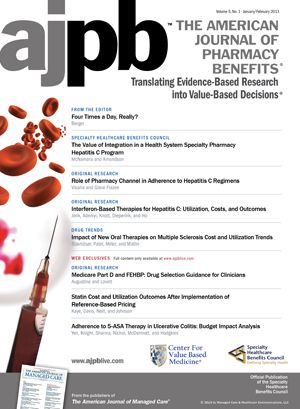