Atrial fibrillation is also more commonly the etiology behind stroke in women than in men.

During a plenary speech at the American Academy of Neurology’s Annual Meeting in Boston, Massachusetts, Louise D. McCullough, MD, PhD, spoke of potential explanations for the elevated stroke risk that women face as compared to men.

McCullough is a professor and the Chair of Department of Neurology at the McGovern Medical School at the University of Texas. She cited the statistics, mentioning that 63% of stroke deaths currently occur in women, and women typically have worse survival rates and outcomes, and the CHA2DS2-VASC risk assessment assigns a point simply for female gender. Women are more likely to be disabled or die from a stroke, and 35% more likely than age-matched men to end up in a nursing home as a result of a stroke.

Atrial fibrillation is also more commonly the etiology behind stroke in women than in men.

“These strokes are big, so it’s not surprising which person is going to do better,” she said, “With our population aging this is just going to become more and more of an issue.”

Despite the chasm, according to McCullough’s review of studies, men are more likely to receive anticoagulants than women, and clinical trials of novel oral anticoagulants (NOACs) have under-represented females. A lot of earlier trials, as well, were conducted with the Veterans Affairs population, she said, contributing to further underrepresentation.

“You need to screen your older patients, your older women, for AFib, and have a pretty low threshold to treat them,” McCullough stressed, mentioning that 30% of men with the condition are anticoagulated compared to only 17% of women.

Within the studies, there exist some gender differences in outcomes from NOAC treatments. Men, it seems, receive better stroke protection from the drugs, whereas women are less prone to major bleeding events, the most concerning and common side effects. This could be the result of yet-to-be-explained differences in how men and women coagulate.

“We have to insist on doing sex-specific analysis. We have to do it,” she said, though she indicated that there may be a social factor, as women are often less likely to participate in clinical trials to start with.

“The most important indicator of outcomes we have found is pre-stroke function,” said McCullough, calling for more sophistication in the appraisal of outcomes-taking into account decreased function prior to the event. She believes it may be found that women may well fare about the same as men, but had lower function prior to the event that makes the outcomes seeming drastically worse.

A potentially surprising risk factor she discussed was loneliness, or social isolation. After the age of 80, more than half of women (52%) end up living alone, compared to less than a third of men at that age (29%), a difference achieved by outliving their spouses, friends, and sometimes even their children. Psychosocial stress can raise stroke risk by 25-45%, and contribute to worsened outcomes.

The presenter pointed to novel studies in stroke-induced mice that found those that were isolated prior to a stroke had massively worse outcomes than those who lived with other mice prior. All of the mice were administered the same scale of stroke, but the previously isolated mice, genetically identical, declined and died far more frequently over the following weeks. 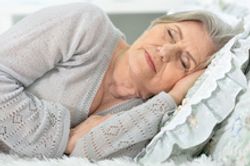