On February 14, 2018, the FDA approved apalutamide (Erleada) by Janssen Biotech Inc for the treatment of nonmetastatic castration-resistant prostate cancer (NM-CRPC).

On February 14, 2018, the FDA approved apalutamide (Erleada) by Janssen Biotech Inc for the treatment of nonmetastatic castration-resistant prostate cancer (NM-CRPC). Erleada is the first FDA-approved treatment for the disease.

“There is a population of men with prostate cancer who have no visible evidence of spread but who have a rise in their blood markers. These patients can have a poor prognosis, and until now, the optimal management of their cancer remained an enigma. These findings suggest there may finally be a treatment that holds real promise for extending their health and their lives,” Sumanta K. Pal, MD, a medical oncologist and assistant clinical professor in the Department of Medical Oncology and Therapeutics Research at City of Hope, said in a statement, when the phase 3 SPARTAN trial data were presented at the 2018 Genitourinary Cancers Symposium.1

The recommended dose is 240 mg (four 60-mg tablets) administered orally once daily. Patients are advised to swallow the tablets whole. Additionally, apalutamide can be taken with or without food. Patients should also receive a gonadotropin-releasing hormone (GnRH) analogue concurrently while taking Erleada or should have a bilateral orchiectomy.

If a patient receives the therapy, they must maintain this treatment during the course of treatment with apalutamide. If a patient experiences grade 3 or above toxicity or an intolerable adverse effect, withhold the medication until symptoms improve to grade 1 toxicity or below or less than the original grade. Then resume at the same dose or a reduced dose (180 mg or 120 mg) if warranted.

The FDA approval of apalutamide was based on data from the SPARTAN trial, a phase 3, multicenter, randomized, double-blind, placebo-controlled study of 1207 patients with NM-CRPC. Patients were randomized 2:1 to receive either apalutamide 240 mg orally once daily (n = 806) or placebo orally once daily (n = 401). All subjects received a concomitant GnRH analogue or had a bilateral orchiectomy. Patients were stratified by prostate-specific antigen doubling time (PSADT), the use of bone-sparing agents, and locoregional disease. They also were required to have PSADT ≤10 months and confirmation of nonmetastatic disease by blinded independent central review (BICR).

The major efficacy outcome of the study was metastasis-free survival (MFS), defined as the time from randomization to the time of first evidence of BICR- confirmed distant metastasis, itself defined as new bone or soft tissue lesions or enlarged lymph nodes above the iliac, bifurcation, or death due to any cause, whichever occurred first. Additional efficacy endpoints included time to metastasis (TTM) and progression-free survival (PFS).

Falls and fractures occurred in patients receiving apalutamide. Monitor and manage patients at risk for fractures according to established treatment guidelines and consider using bone-targeted agents.

Seizures occurred in patients receiving apalutamide, therefore treatment should be permanently discontinued in these cases. It is unknown whether antiepileptic medi- cations will prevent seizures in patients administered apalutamide. Therefore, advise patients of the risk of developing a seizure while receiving apalutamide and of engaging in activity in which sudden loss of conscious- ness could cause harm to themselves or others.

Use in Males of Reproductive

Effects of Other Drugs on Apalutamide

Coadministration of strong cytochrome P450 2C8 or cytochrome P450 3A4 (CYP3A4) inhibitors is predicted to increase the steady-state exposure of the active moieties. No initial dose adjustment is necessary; however, reduce the dose based on tolerability.

Effect of Apalutamide on Other Drugs

Apalutamide is a strong inducer of CYP3A4 and cytochrome P450 2C19 (CYP2C19) and a weak inducer of cytochrome P450 2C9 (CYP2C9) in humans. Concomitant use of apalutamide with medications that are primarily metabolized by CYP3A4, CYP2C19, or CYP2C9 can result in lower exposure to these medications. Substitution for these medications is recommended when possible. If the medication is continued, evaluate for loss of activity. Concomitant administration of apalutamide with medications that are substrates of UDP-glucuronosyl transferase (UGT) can result in decreased exposure. Use caution if substrates of UGT must be coadministered with apalutamide and evaluate for loss of activity.3 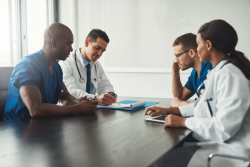