Development of the GO-POP Model

A survey shows that 13% of respondents started or increased substance use to cope with pandemic-related stress or emotions.

2020 was unprecedented for not only the tragedy of the coronavirus disease 2019 (COVID-19) pandemic, but for the sharp uptick in opioid overdoses and deaths. In the first 3 months of the year, 216 people died every day from a drug overdose, whereas during the same period in 2019, 185 people died each day. This increase in deaths highlights some of the pandemic’s broad health impacts outside of the fight against COVID-19, said Brittany A. Davidson, MD, an assistant professor at Duke University, during a session at the 2021 Society of Gynecologic Oncology Virtual Annual Meeting on Women’s Cancer.

According to a survey of adults in June 2020, 13% of those surveyed had started or increased substance use to cope with pandemic-related stress or emotions. Although it is well known that many substance use disorders begin with a legitimately obtained opioid prescription, over prescribing of postoperative opioids is an issue across specialties, according to Davidson. Aspects of existing postoperative opioid calculators are lacking, which may be causing the over prescription of opioids.

In light of these issues, she explained that her research team focused their study on the development of a post-operative opioid calculator that was route agnostic and could be used for patients discharged the same day or with an inpatient postoperative admission. The calculator incorporated patient-facing questions to acknowledge psychosocial factors in the experience of pain.

Patients eligible for this study included those who spoke English, were aged 18 or older, were scheduled for abdominal gynecologic (GYN) surgery, and had benign and malignant surgical indications. Additionally, patients with preoperative opioid use were included in the study to maximize the generalizability of the results.

During the study, patients were called at weekly intervals until 6 weeks or until they reported no further opioid use. The investigators used a unique, previously validated, 3-question preoperative tool developed to assess patients’ anxiety about surgery, their expectations around postoperative pain, and their individual needs for pain medication.

The primary outcome of the study was the number of opioid pills used after hospital discharge, with the opioid of choice within the investigators’ practice generally being oxycodone, according to Davidson.

In total, 39 preoperative, intraoperative, and postoperative potential predictors were considered during the study, and participants were recruited in 2 cohorts. The first was the training cohort, from which 3 candidate models were selected, and the second provided the opportunity for testing those 3 models. The models were then internally validated using 1000 bootstrap samples to obtain bias-corrected accuracy.

In the training cohort, 274 women consented to participate in the study. Of these, 249 went on to have surgery, with 216 remaining available for adequate follow-up, which provided the final sample of patients included in this portion of the analysis.

In the testing cohort, a second group of women consisting of 185 female patients participated. One hundred seventy patients had surgery, with 166 providing adequate follow-up, allowing for their inclusion in the testing analysis.

The 3 candidate models selected based on the data from the training cohort were the backward stepdown variable elimination model, the penalized ordinal regression model, and the combined model.

In the testing cohort, the penalized ordinal regression model did not perform well, leaving the backward stepdown model and the combined model for further consideration. Both those models were then assessed using the training and testing cohorts to gather further insight into the efficacy of each.

Based on the final analysis, the combined model, which used 7 predictors in total, was the best performing model in this phase of the study. The probabilities of this model, termed the Gynecologic Oncology Postoperative Opioid Use Predictive (GO-POP) model, allow the end user to adjust their prescribing practices in an informed way, according to Davidson.

“We’ve developed the GO-POP opioid predictor model, which is a patient-centered model that is route agnostic and can be utilized in patients undergoing GYN surgeries for both benign and malignant indications,” she said. “With this model, we’ve developed an online calculator and are currently working on [its] integration into the electronic health record to facilitate access to data-driven opioid prescribing practices.”

Study: More Than Half of US Adults Not Aware of Link Between Alcohol, Cancer 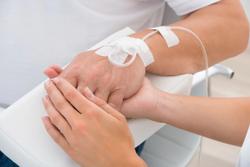