Buprenorphine treatment with and without induction was found to decrease costs and utilization in opioid-dependent benefciaries.

Objectives: Opioid dependency is a significant societal burden. Buprenorphine has improved access and safety for outpatient detoxification services. The objectives of this study were to determine, based on assessment of administrative medical and pharmacy claims, if use of buprenorphine induction (with or without naloxone) in an opioid-dependent population with commercial benefit coverage improved clinical and cost outcomes compared with buprenorphine without induction and with no use of buprenorphine.

Study Design: This is a retrospective observational claims review with a 4-month pre- and posttreatment study design and analysis of medical, behavioral health, and pharmacy utilization patterns for all levels of service.

Results: Induction and noninduction buprenorphine treatment were associated with significantly reduced inpatient utilization (81.8% reduction in hospitalizations vs 43.1% reduction in the no-treatment group; P <.05) and lower total medical, behavioral health, outpatient, and pharmacy costs (cost ratio, 0.52:1; P <.001). There was a cost and utilization shift from inpatient toward outpatient, and we observed a shift in pharmacy claims from medical to behavioral health services; we observed a cost ratio of 1.58:1 for total pharmacy (P <.05) and 2.26:1 for nonpsychotropic pharmacy (P <.0001).

Conclusions: Our findings support the use of buprenorphine with and without induction to decrease inpatient utilization and substantially lower total medical, behavioral health, and pharmacy costs.

According to the United States Substance Abuse and Mental Health Services Administration and recent research, more than 4.3 million Americans engaged in nonmedical use of prescription painkillers in 2014.1,2 Opioid dependence is a growing epidemic, impacting people of all socioeconomic backgrounds and age groups.3 Recidivism is high, and treatment programs, including pharmacotherapy options, have been limited.

The introduction of buprenorphine4,5 has offered a relatively rapid, safe, and effective means to detoxify opioid-dependent people in an office-based setting.4 Standard induction protocol generally spans 3 days and is described in detail in the Center for Substance Abuse Treatment Clinical Guidelines for Use of Buprenorphine in the Treatment of Opioid Addiction.6 Recent studies in low-income populations have demonstrated increased outpatient referrals and fewer hospitalizations/emergency department visits following buprenorphine induction,7,8 stabilization, and linkage to outpatient treatment in opioid-dependent inpatients (injection and noninjection drug users. There is great need for cost and utilization studies among commercial benefit plan populations.

Eligible claims for this retrospective observational study were drawn from health maintenance organization (HMO), point-of-service (POS), and preferred provider organization Cigna products. We analyzed 69,495 behavioral health administrative claims for 8503 opioid-dependent Cigna customers 18 years and older, with dual eligibility for medical and behavioral health benefits. Individuals were included if they had a primary, secondary, or tertiary diagnosis of opioid dependence for a date of service between October 1, 2006, and December 31, 2007, that was documented on a behavioral health claim, including Diagnostic and Statistical Manual of Mental Disorders, 4th Edition, diagnosis codes 304.0-304.03 and 304.7-304.73 (referring to all opioid dependence diagnoses).

Eighty-eight customers were found to have the H0033 procedure on a claim. Twenty-three records were excluded because there were no corresponding pharmacy claims for buprenorphine; they were either ineligible for the benefit plan’s pharmacy (n = 8), their medical benefits enrollment was interrupted, or they resided in California, where providers submit encounter-only, rather than actual claims, data to Cigna (n = 9).

Service codes on the induction group’s outpatient claims indicated group, individual, and family therapy; nonspecific office visits (such as outpatient); and programmatic intensive outpatient level of care. Claims submitted were assigned to 1 of 3 benefit categories: detoxification, chemical dependence, and non-substance-related mental health. In order to match groups for claims submitted, only claims for these types of services were considered in the analysis for the noninduction group and the no-treatment group. This reduced the number of records included in the analytic sample by 61.7% in the noninduction group and by 94.9% in the no-treatment group.

Of the 8503 opioid-dependent individuals initially identified, 648 met the final criteria for study inclusion. The final study group consisted of 48 undergoing induction treatment, 241 undergoing noninduction, and 359 in the no-treatment group.

The 4-month baseline and follow-up periods were based on the date of the earliest H0033 procedure for the induction group (index date) and on the earliest opioid-related outpatient visit for the noninduction and no-treatment groups.

Clinical outcomes included changes in the rates of medical and behavioral health hospitalizations and in inpatient detoxification services from the baseline to the follow-up period. Four-month baseline and follow-up costs and services for medical and behavioral health outpatient, inpatient, nonpsychotropic, and psychotropic pharmacy were calculated and reported as per-customer/member per-month or utilization-per-1000 respectively. Claims with zero cost amounts were kept, but to mitigate the effects of outliers, total costs were capped at $50,000 (corresponding with a “catastrophic spend”) based on the full 4 months of each period.

Homogeneity tests between groups were conducted using χ2 tests. Student’s t tests, χ2 distributions, and analyses of variance were used to compare demographics and clinical outcomes on the average number of diagnoses between and across groups.

Difference in differences analysis among groups was used to examine the change in total healthcare costs and utilization from baseline to the 4-month follow-up. General linear regression was used to compare adjusted cost ratios. Unadjusted ratios and actual costs were also reported. Although most outcomes were adjusted for age, gender, the interaction between age and gender, and type of benefit plan, inpatient cost and utilization outcomes were unadjusted due to scarce follow-up volume of service.

Of the 47,055 US drug overdose deaths in 2014, 28,647 (60.9%) involved an opioid.9 The 2016 Comprehensive Addiction and Recovery Act10 was signed into law to address the opioid epidemic in part through a medication-assisted treatment and intervention demonstration program.11 Our findings of utilization shift from inpatient to outpatient and reductions in cost add to evidence for clinical utility of buprenorphine compared with methadone, including reduced mortality, crime, and personal costs 12—16 and focused on short-term (up to 1-year follow-up).

One strength of this study was that we compared utilization and included total costs across the inpatient, outpatient, pharmacy, behavioral health, and medical care areas. This enabled us to observe the effects of buprenorphine on total costs across all levels of service, and show an even greater impact than have other studies that were limited to specific levels. For example, Kaur et al evaluated the impact of buprenorphine use on pharmacy utilization and cost outcomes in a group dependent on prescription opioids. The reduced opioid prescription cost they found in the first 6 months was neutralized by the increased cost of buprenorphine, and the reduction was lost altogether at 1 year.11

Our findings are noteworthy in that they evaluate the effectiveness of buprenorphine in reducing use and costs for behavioral health or for medical inpatient services. Barnett found a similar cost benefit loss at 6 months when comparing buprenorphine with methadone in a Veterans Administration population.13 In line with Kaur and colleagues, we observed escalated pharmacy costs; like Barnett, however, we found that any upward cost shift was significantly offset by reduced overall services, including use of inpatient services, which were not evaluated by Barnett. In the context of other recent study findings confirming the utility of buprenorphine in improving costs and outcomes, including findings from the SUMMIT trial and by Ruger et al and Schackman et al,5,19-22 our findings strongly support formulary inclusion of buprenorphine coverage by benefit plans.

Our data did not include reasons why prescribers chose to place a given customer in an induction versus a non-induction group. Claims information for methadone prescriptions was not available because methadone is administered by state-run clinics and is typically not covered under commercial benefit plans. No review was done to determine if any customer had been prescribed other medications, such as naloxone. Our study was limited by the constraints of eligibility and claims-paid data elements, the retrospective and observational design, reporting limitations, and relatively short-term outcomes. Generalizability was reduced by the fact that we considered service use a proxy for clinical effectiveness, since abstinence could not be directly assessed. The fact that our no-treatment group had significantly higher comorbidities and greater use of prescriptions further limits those conclusions. Future studies should examine the sustainability of these outcomes over longer time periods. Although our study data are from 2007, our analyses address the persistence and urgency of a worsening epidemic that has only become exacerbated in recent years,1 and they provide evidence for an important step that health plans can take to reduce costs and improve health and safety.

We observed significantly reduced costs and utilization of inpatient and outpatient medical services in those who received buprenorphine induction or noninduction compared with the no-treatment group. The effect was most pronounced in the induction group. The benefit appears to be driven largely by reductions in the use of higher levels of care detoxification, behavioral health and medical admissions, and combined outpatient services.

This study was funded by Cigna Health and Life Insurance Company

Financial Disclosures: All authors were employed by Cigna Health and Life Insurance Company or another Cigna affiliate at the time the work was conducted.

16. Harris AH, Gospodarevskaya E, Ritter AJ. A randomised trial of the cost effectiveness of buprenorphine as an alternative to methadone maintenance treatment for heroin dependence in a primary care setting. Pharmacoeconomics. 2005;23(1):77-91.

17. Kaur AD, McQueen A, Jan S. Opioid drug utilization and cost outcomes associated with the use of buprenorphine-naloxone in patients with a history of prescription opioid use. J Manag Care Pharm. 2008;14(2):186-194.

18. Barnett PG. Comparison of costs and utilization among 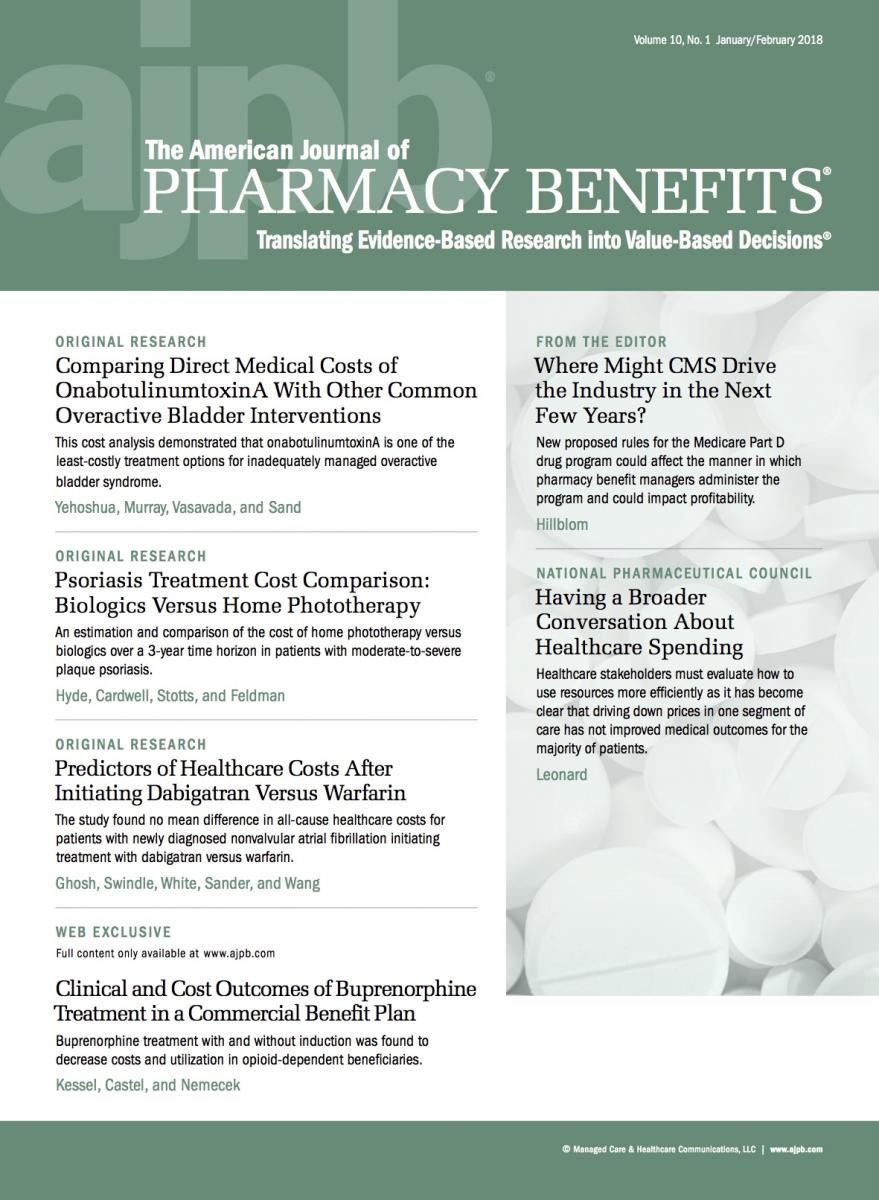 Where Might CMS Drive the Industry in the Next Few Years?
Having a Broader Conversation About Healthcare Spending
Comparing Direct Medical Costs of OnabotulinumtoxinA With Other Common Overactive Bladder Interventions
Psoriasis Treatment Cost Comparison: Biologics Versus Home Phototherapy
Predictors of Healthcare Costs After Initiating Dabigatran Versus Warfarin
Clinical and Cost Outcomes of Buprenorphine Treatment in a Commercial Benefit Plan Population
Related Videos
Related Content