The objective of this study is to evaluate the use of low-dose pioglitazone, without relying on high doses of insulin, by enhancing sensitivity as a suitable, cost-effective strategy compared to larger insulin doses in patients with limited access to care.

Thiazolidinediones (TZDs) enhance insulin activity and reverse insulin resistance, a common characteristic of type 2 diabetes.1 These agents are ligands for peroxisomal proliferator-activated receptor gamma (PPARγ), a nuclear receptor superfamily member and a transcription factor that is expressed at high levels in adipose tissues.2

PPARγ is involved in modulating the insulin-responsive glucose transporter GLUT 4, which plays a crucial role in glucose uptake and metabolism in insulin target tissues.3 These insulin sensitizers function on intracellular metabolic pathways.

As a result of this act, there will be an improvement in insulin action and an increase in insulin sensitivity in critical tissues.4 These agents can facilitate glucose transport activity, enhance glycogen synthesis, and stimulate insulin-mediated glucose uptake and disposal in skeletal muscle tissue.5 Despite the well-established benefits this class offers in glycemic control, they have fallen out of favor due to concerns over their adverse effects (AEs), such as edema and weight gain.

Studies have shown the AEs of this drug are diminished if low doses of pioglitazone are added to insulin therapy (i.e., 15 mg/day).4,6 The objective of this study is to evaluate the use of low-dose pioglitazone, without relying on high doses of insulin, by enhancing sensitivity as a suitable, cost-effective strategy compared to larger insulin doses in patients with limited access to care.

The following studies support the benefits of combination therapy of thiazolidinedione and insulin. “Concomitant therapy with pioglitazone and insulin for the treatment of type 2 diabetes” is a study published in 2010 that showed a dramatic lowering effect in plasma glucose when low-dose pioglitazone is used in combination with insulin therapy.4

Two large prospective clinical trials have demonstrated that pioglitazone reduces cardiovascular incidents in association with enhanced insulin sensitivity. A decrease in plasma triglyceride and transformation of small dense low-density lipoprotein (LDL) particles to larger and less dense LDL particles are other characteristics of these agents that can lead to the correction of diabetic dyslipidemia and can decrease the risk of cardiovascular complications.9

Both patients presented in this case report are covered under a formulary that only offers metformin, sulfonylureas, thiazolidinediones, and Neutral Protamine Hagedorn (NPH) insulin to treat diabetes. Due to limited accessible options, increasing insulin doses are, at points, the only feasible option for controlling diabetes in these patients. Addition of pioglitazone 15 mg daily significantly lowered HgA1c by 4% and 6%, respectively, in less than 6 weeks in 2 patients with T2DM and limited access to care who were already receiving insulin.

The first patient was a 52-year-old Hispanic male with uncontrolled diabetes who presented to the clinic to be seen by the primary care provider (PCP) and a clinical pharmacist. His random blood glucose performed by PCP was > 650 mg/dL. His laboratory value showed an HbA1c of 18.4%.

He reported blurry vision, excessive thirst, frequent urination, and tingling in the toes. He was started on short- and long-acting insulin (lispro and glargine), metformin, glimepiride, and pioglitazone. For a complete list of the therapeutic regimen for this patient, please refer to Table 1. 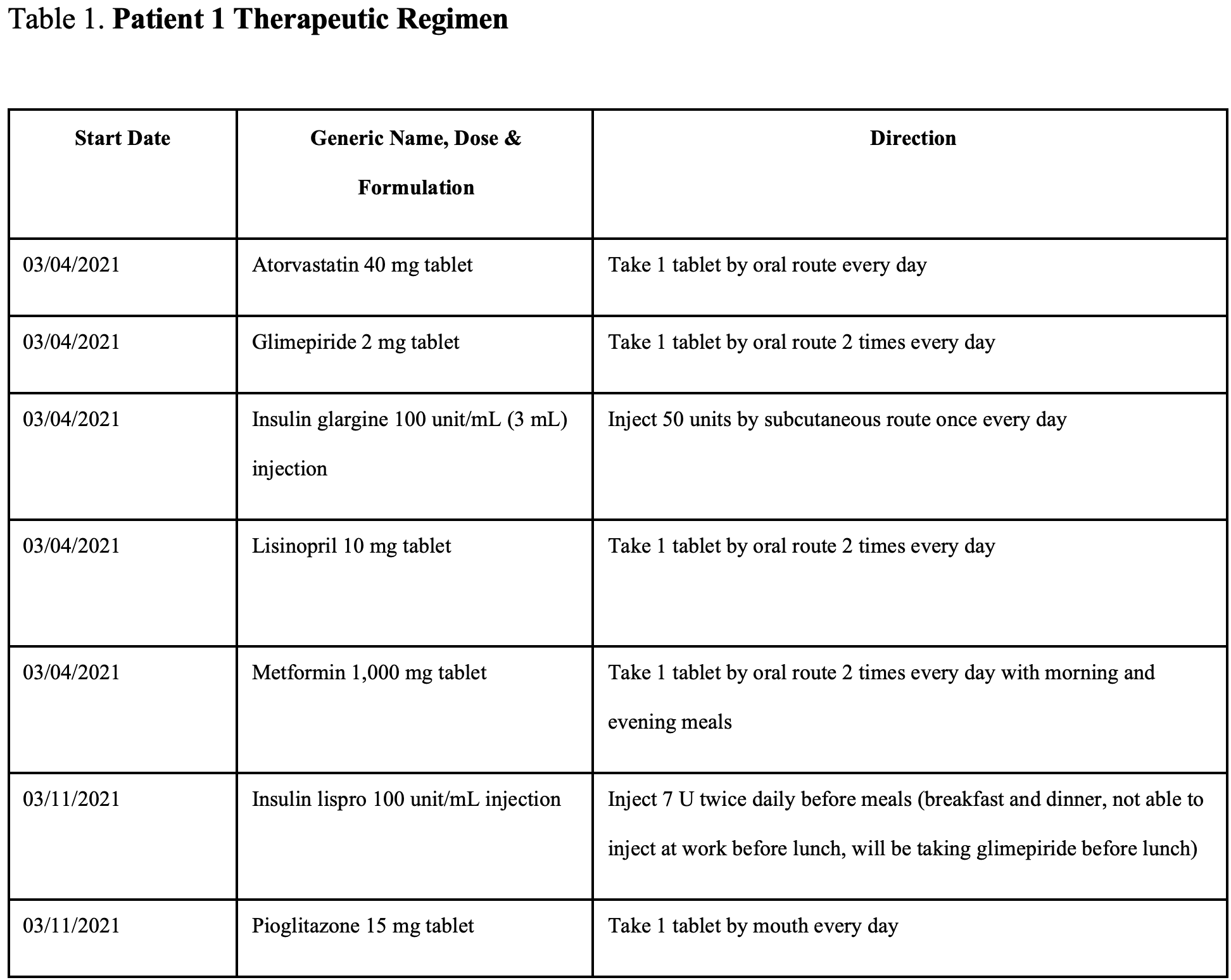 TZD was initiated at a low dose of pioglitazone 15 mg with the goal of increasing insulin sensitivity. In 5 weeks since the initiation of the therapy, his HbA1c decreased from 18.4% to 14.3%. His self-monitored blood glucose (SMBG) readings steadily improved, with fasting glucose levels ranging from 120 to 160 mg/dL.

A fasting lipid panel revealed a significant decrease in LDL level from 123 mg/dL to 31 mg/dL. Furthermore, a substantial reduction in triglyceride levels was also observed from 235 mg/dL to 63 mg/dL. In his next follow-up appointment, the patient stated that he felt an improvement in his overall health and vision and reported less urination once he started taking his medications. Refer to Table 2 for other pertinent laboratory values. 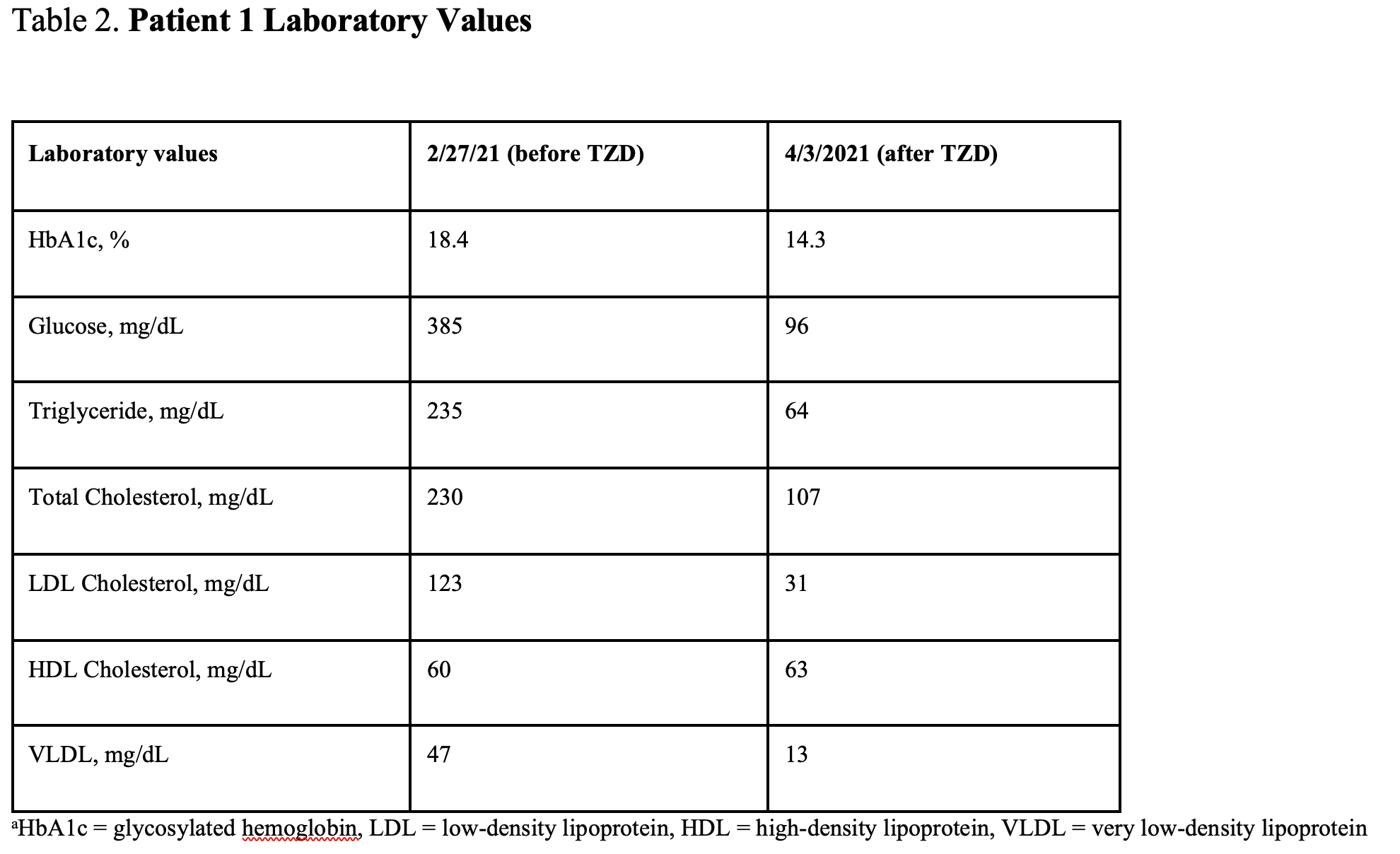 The second patient was a 66-year-old Hispanic male who was a new patient at the clinic. He stated that he takes basal insulin but stopped taking his oral medications (metformin 1000 mg) since he ran out of his medicine. He was initiated on metformin, basal-bolus insulin, and pioglitazone in the clinic.

For a complete list of the therapeutic regimen for this patient, please refer to Table 3. This patient’s HbA1c dropped to 12.8%, from 18.1% in less than 6 weeks after 15 mg pioglitazone was added. 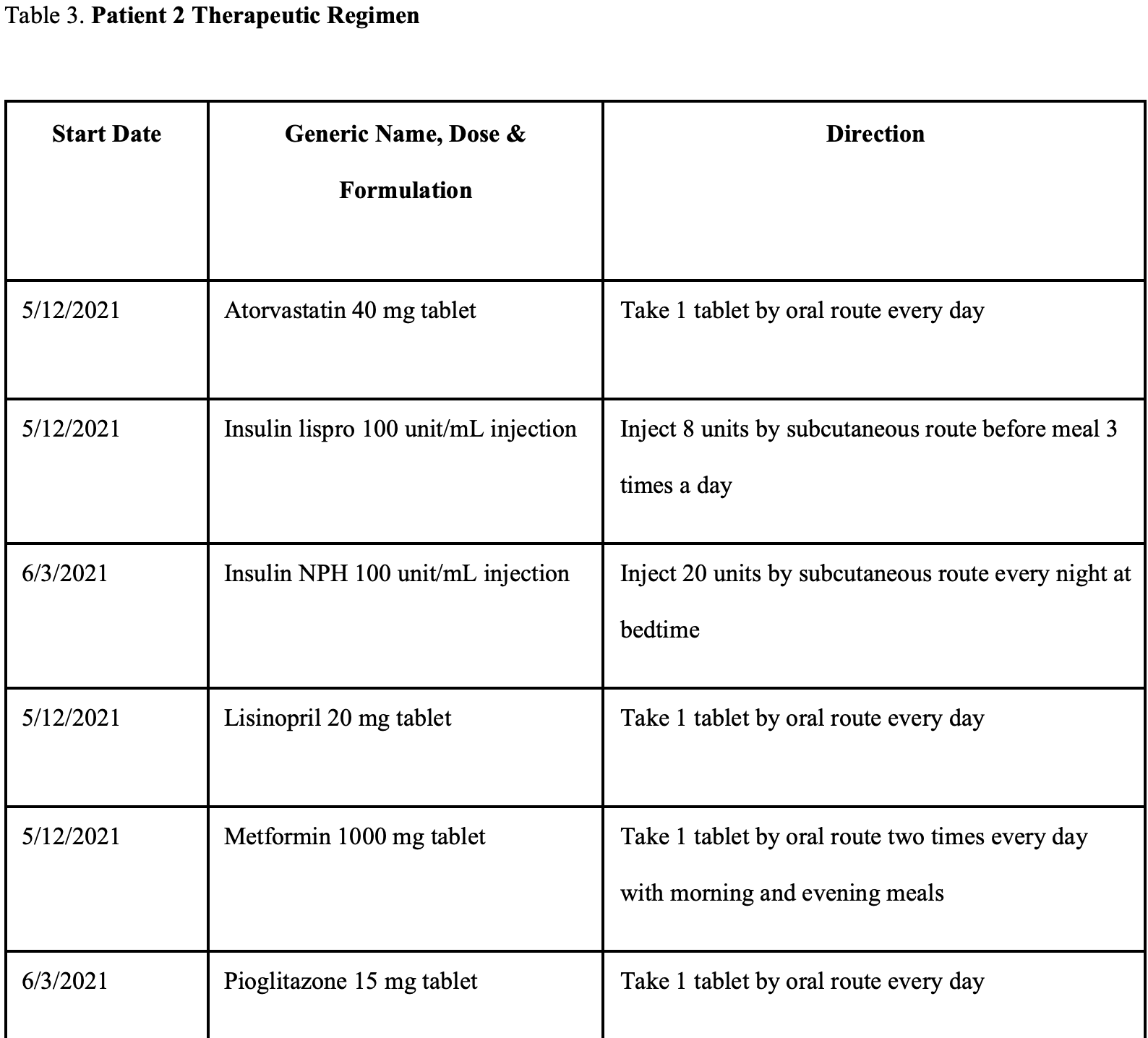 As stated in Table 4, LDL has been reduced to 104 mg/dL from 128 mg/dL. Triglyceride has been reduced from 161 mg/dL to 114 mg/dL. His self-reported fasting blood glucose readings were in the range of 122 mg/dL to 163 mg/dL after the initiation of his therapeutic regimen. Refer to Table 4 for other pertinent laboratory values. 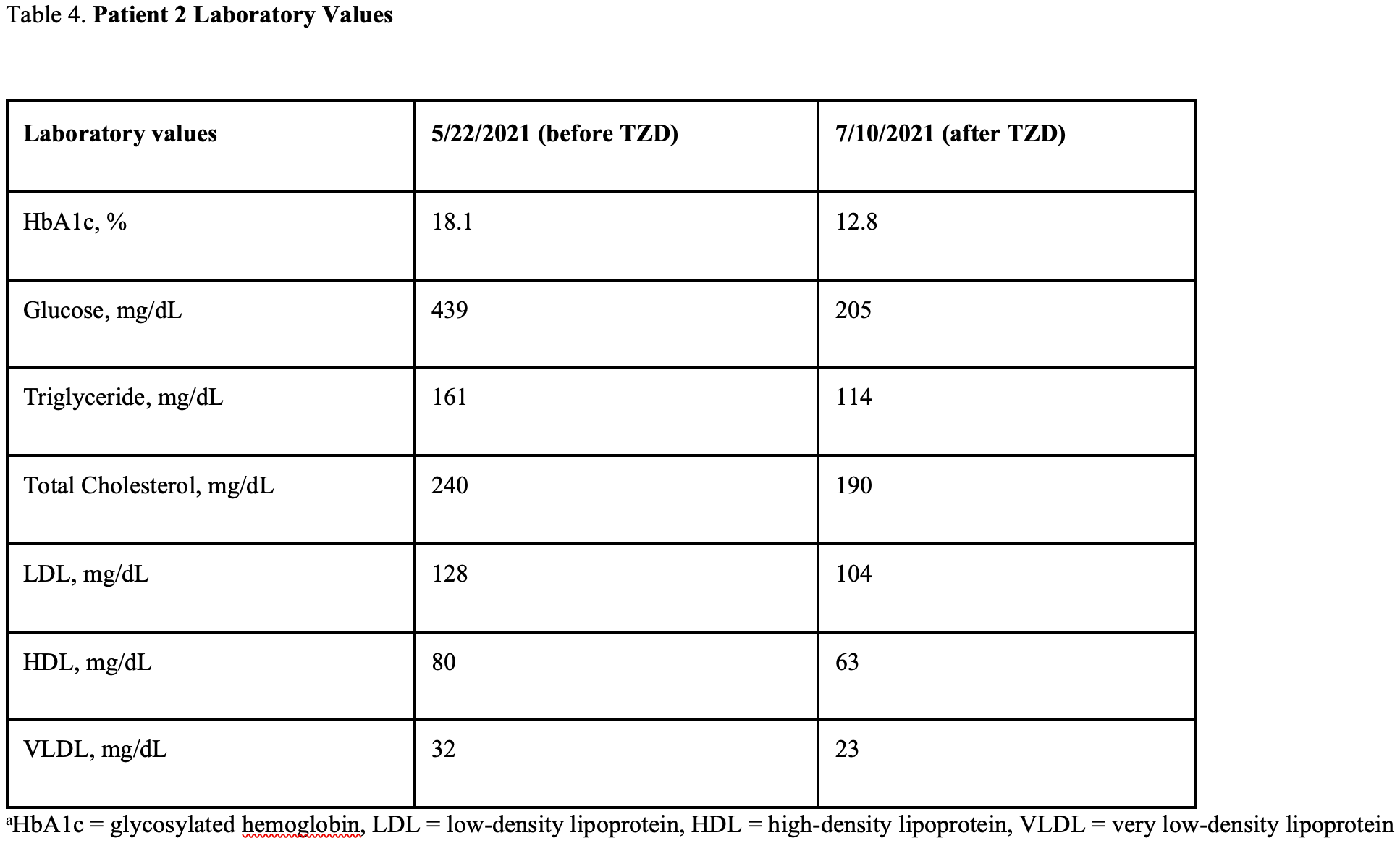 Hyperinsulinemia is a marker of insulin resistance, a common feature of type 2 diabetes mellitus (T2DM), and can be associated with metabolic syndrome.1,10 The main reason for this event can be explained by the impaired transduction of insulin signals as a result of receptor dysfunction.

Patients with severe insulin resistance require large doses of insulin, such as >2 units/kg of body weight or 200 units/day of insulin. Despite using such high insulin doses, many patients are still not able to achieve glycemic targets. When cells are continuously exposed to elevated insulin levels, it can lead to partial downregulation of insulin signaling.11

Insulin resistance and continuous dose escalation of insulin to compensate for the resistance can result in hyperinsulinemia, which is associated with a collection of cardiometabolic risk factors that can lead to an increased risk of cardiovascular disease in patients with type 2 diabetes.9 Furthermore, as evidenced in the ACCORD study, aggressive insulin therapy in patients with type 2 diabetes elicits safety concerns including hypoglycemia and weight gain.4

The continuous cycle of insulin dose escalation in patients with uncontrolled diabetes can lead to insulin resistance, triggering oxidative stress and causing an inflammatory response that may lead to cellular damage. Additionally, insulin resistance can change systemic lipid metabolism, which then contributes to the appearance of high levels of plasma triglycerides, low levels of high-density lipoprotein (HDL), and small dense LDLs. These developments along with endothelial dysfunction can lead to the formation of atherosclerotic plaque.12,13

Pioglitazone has been shown to reduce the hyperinsulinemia characteristic of insulin-resistant states.14 In epidemiological studies, high-dose insulin therapy was connected with a higher risk of cardiovascular disease.11

When selecting a therapeutic agent, factors such as cost effectiveness, insurance coverage, and the enhancement of treatment that these agents offer are considered. The patients presented here had limited antidiabetic treatment options due to constraints related to insurance coverage but both responded well to adding pioglitazone 15 mg to their insulin therapy.

They tolerated the treatment regimen well with no reported AEs. This regimen was associated with an absolute reduction in HbA1c of 4.1% (from 18.4% to 14.3%) and 5.3% (18.1% to 12.8%). Both patients benefited from an improved lipid profile as triglyceride and LDL have decreased and achieved the target point.

This case report suggests combining small doses of pioglitazone with insulin may be an option for patients with limited access to newer antihyperglycemic agents who achieve an inadequate reduction in their blood glucose with insulin monotherapy as it can potentially lead to simplified, lower doses of insulin, and better glycemic control over time.

This approach was conducted to optimize insulin sensitivity and avoid the progression of intensifying insulin therapy. Further research needs to be done to support this theory and such an analysis would be of great clinical and pathophysiologic importance.