Breaking Down the New Nutritional Icon

The USDA has introduced a new concept to help cut down on confusion and facilitate healthier eating.

In an effort to make it easier for Americans to fill their plates with healthier foods, the United States Department of Agriculture has replaced the iconic food pyramid with a new concept: a plate. 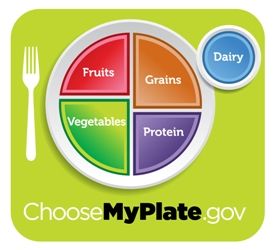 Based on the 2010 Dietary Guidelines for Americans, the plate is divided into four sections, with one half including a large serving of vegetables and smaller serving of fruit, and the other consisting of equal portions of grains and protein. A small serving of dairy is also included next to the table.

Whereas the pyramid design was criticized for being confusing and for misleading consumers by grouping all types of foods together, MyPlate is designed to make the process of choosing healthy foods as simple as possible.

“With so many food options available to consumers, it is often difficult to determine the best foods to put on our plates when building a healthy meal,” said Agriculture Secretary Tom Vilsack. “MyPlate is an uncomplicated symbol to help remind people to think about their food choices in order to lead healthier lifestyles.”

The new icon provides a visual cue that spells out clearly how much of each major food group should be included in most meals “to serve as a quick and easy guide for American families,” according to Vilsack. It incorporates 7 key dietary messages:

One of the principles that may have surprised some is the recommendation to make sure that half—and not all&mdash;grains consumed are of the whole grain variety. The reason for this, according to Julie Miller Jones, PhD, professor emeritus at St. Catherine University in St. Paul, Minnesota, is that although whole grains protect against cardiovascular disease, obesity and type 2 diabetes, and are essential for optimal digestive health, refined grains also provide benefits. For example, cereal, bread, and other grains contain folic acid that is added during the manufacturing process. This, she said during a symposium at the 2011 Institute of Food Technologists (IFT) Annual Meeting & Food Expo, has resulted in a 46% decrease in neural tube defects among newborns. Jones also noted that some nutrients, such as iron and copper, are more difficult to absorb when they are eaten in whole grains instead of refined grains.

Although the new icon is supported by many nutrition experts, it does have its critics, including blogger Karen Iracane, who called the excitement that has been displayed over MyPlate “a bit of an overreaction,” adding that the idea that changing a concept will curb the obesity epidemic “seems extremely naive.

“If you want people to make better choices with regard to food, healthy food needs to be more affordable,” Iracane wrote.

And yet some believe that if the new icon succeeds even in a starting or continuing a dialogue about healthier eating, it is a victory for all involved.

Another blogger, medical student James Haddad, wrote that although “there are still problems with some of USDA’s suggestions, there may never be consensus on such matters.”

Haddad provided his own tips on healthy eating as an addendum to the USDA guidelines:

For more information about the MyPlate initiative, including customized food plans, sample menus, and other resources, click here.

For more on obesity, check out the Counseling Focus in the June issue of Pharmacy Times, which focuses on Women and Obesity.