The FDA recently approved the amyloid beta-directed antibody indicated for the treatment of the progressive disease.

A new treatment for Alzheimer disease (AD) provides another option to treat this progressive disease that causes the brain to atrophy.

Known as one of the most common causes of dementia in adults, AD leads to a decline in the ability to function independently, behavioral and social skills, and thinking processes.¹

About 5.8 million Americans in 2020 were living with the disease, according to CDC data.2

Estimates show that this number will nearly triple to about 14 million people by the year 2060. Although the disease occurs mostly in older individuals, symptoms sometimes also occur in younger patients.²

The disease is named after physician Alois Alzheimer, MD, who in 1906 discovered changes in the brain of a female patient who had died of mental illness. This patient suffered from language problems, memory loss, and unusual behavior. While examining her brain, Alzheimer found a few abnormal clumps, also known as amyloid plaques, and tangled bundles of fibers called neurofibrillary tangles.³

An early symptom of AD is forgetfulness. As the disease advances, the individual may develop more severe memory impairment and can become more debilitated, causing then to struggle with completing everyday tasks. Symptoms are typically noticed by close family members who interact with the individual frequently, and they may become severe to the point that the patients forget relationships and even sometimes the names of loved relatives. Changes in the brains of these patients can also affect their behavior and mood and include aggressiveness, delusions, depression, irritability, more distrust of others, and social withdrawal.¹

Causes of AD may be related to brain proteins that fail to function normally, causing neurons to not be able to perform their duties. This impairment can be caused by environment, genetics, and lifestyle. The damage starts earlier than the point that the symptoms start to show, and in late stages, the brain shrinks significantly from its normal size.¹

The proteins involved include beta-amyloid plaques, which when clumped together cause toxic effects on neurons and disrupt the cell-to-cell connection. Meanwhile, Tau proteins help carry essential minerals and nutrients to the brain, and in patients with AD, these proteins change shape and become entangled. This disrupts the nutrient transport system, affecting brain cell function.¹

Genetics play a role in a patient developing AD, specifically for those with first-degree relatives diagnosed with the disease. Gender also plays a role, with women diagnosed more often than men, though this may also be related to the fact that women tend to live longer.1

One genetic factor known to cause the disease is Apolipoprotein E gene, which with the e4 variation, increases the risk of AD exponentially. Additionally, patients with Down syndrome are more likely to develop AD than others. This is likely related to 3 copies of the chromosome 21, which connect with the creation of beta-amyloid.¹

On June 8, 2021, the FDA approved aducanumab injection (Aduhelm), an amyloid beta-directed antibody indicated for the treatment of AD. Aduhelm comes in 2 dosages of 170mg/1.7ml and 300mg/3ml solution. The recommended dosage for this drug is 10mg/kg as an intravenous infusion for more than 60 minutes every 4 weeks.⁴

Aduhelm provides new hope for patients diagnosed with AD to have more treatment options available to them after many years of waiting for an FDA approval. The future for research in this area is promising and holds the key to more discoveries, including a cure for AD. 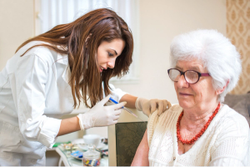