Chikungunya was rarely seen in US travelers before 2006, but the virus has grown more prevalent. Now, almost all states have seen at least one case of the disease in US travelers this year.

Chikungunya was rarely seen in US travelers before 2006, but the virus has grown more prevalent. Now, almost all states have seen at least one case of the disease in US travelers this year.

Chikungunya virus is transmitted primarily through mosquito bites, though there have also been reports of laboratory workers and health care professionals who became infected after handling the blood of an infected patient.

Reports of infection tend to come from US travelers who visited Puerto Rico, American Samoa, and the US Virgin Islands, according to the US Centers for Disease Control and Prevention (CDC).

Since there is no antiviral therapy specifically for chikungunya viral disease, patients diagnosed with it may be treated with corticosteroids or physiotherapy for joint pain. They may take nonsteroidal anti-inflammatory drugs for pain and fever.

Health care professionals should stress plenty of fluids and rest for infected patients.

Here are 5 must-know facts pharmacists should know about chikungunya:

1. Look out for symptoms such as fever and polyarthralgia among travelers.

Patients will typically present symptoms for 3 to 7 days, though the full range can be from 1 to 12 days, according to the CDC.

Acute onset of fever typically around 102 degrees is common, as well as joint pain.

(The word chikungunya is derived from the Makonde language and literally translated as “that which bends up,” referring to the debilitating joint pain that infected patients experience, according to an article published in the Indian Journal of Dermatology.)

Those with hypertension, diabetes, and cardiovascular disease, as well as patients over 65, are more at risk for severe disease, according to the CDC.

The virus is rarely fatal, but older patients face a greater mortality risk.

2. Chikungunya may cause central nervous system disease such as encephalitis.

A 2015 study published in Neurology found that the chikungunya virus caused central nervous system disease in many patients during an outbreak in Reunion Island.

In a cohort of 300 patients with chikungunya, 57 patients had central nervous system disease, including 24 who had developed encephalitis.

The researchers also discovered that the fatality rate for those with chikungunya-associated encephalitis was 16.6%.

In addition, 30% to 45% of children who had been infected and developed the rare brain inflammation were discharged with persistent disabilities.

Although the virus was not a “nationally notifiable disease” in the United States in 2014, according to the CDC, all states except 4 reported at least one instance of chikungunya.

Twelve of the cases were locally transmitted in Florida, but the rest were from travelers. 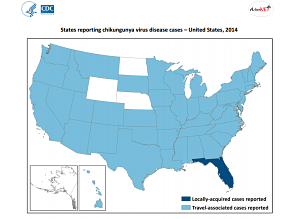 ArboNET, a national surveillance system for arthropod-borne diseases, reported 4710 cases from US territories in 2014. The majority of them (4659) originated from Puerto Rico, the US Virgin Islands, and American Samoa.

The American public may have first heard of the virus in 2014, when actress Lindsay Lohan revealed she was infected during a trip to French Polynesia, Time reported.

In the summer of 2015, Lohan shared on social media that she was experimenting with cryotherapy to relieve her joint pain.

4.So far, 623 cases of chikungunya have been reported among Americans in 2015.

It wasn’t until 2015 that the CDC recognized chikungunya as a “nationally notifiable condition.”

CDC data reveals that 623 Americans from 43 states have been infected by the virus as of December 1, 2015.

None of the cases were transmitted locally. 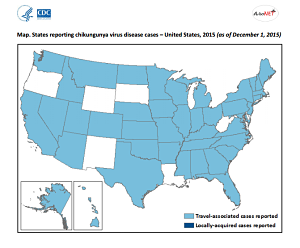 The states with the highest numbers of travel-associated chikungunya cases are California (159), Florida (66), and New York (66).

5. Researchers have made strides in developing a chikungunya vaccine.

Washington University School of Medicine researchers have discovered some neutralizing antibodies that protect against the chikungunya virus.

This revelation could lead to a vaccine or an antibody-based treatment that could protect against many alphaviruses in the future.

“There is a lot of emphasis on identifying and understanding broadly neutralizing antibodies for other viruses—HIV, hepatitis C virus, dengue virus, influenza virus&mdash;but most of those antibodies neutralize different strains of the same virus,” said senior author Michael Diamond, MD, PhD, a professor of medicine and director of the Division of Infectious Diseases and Vaccine Development in the Center for Human Immunology and Immunotherapy Programs, in a university press release. “What we’ve identified here are antibodies that actually neutralize several different