IntroductionHepatitis C virus (HCV) is the leading indication worldwide for liver transplantation. In the United States alone, approximately 3.8 million people are infected with this disease, with the most common mode of transmission being percutaneous exposure with contaminated blood product. HIV patients, intravenous drug users, hemophilic patents, and sexually promiscuous patients are at particularly high risk of contracting HCV. In contrast to other forms of viral hepatitis, approximately 85% of patients infected with HCV proceed to a chronic phase.

Monomethyl polyethylene glycol (PEG) is a conjugate added to interfer-on alfa-2b to increase half-life and decrease elimination of interferon. Like other interferons, peginterferon binds to a specific receptor and activates cellular activity of cytotoxic T-lymphocytes and natural killer cells. The pharmacodynamic effect of pegin-terferon is derived from the interferon alfa-2b moiety, which is obtained from genetically engineered plasmids of Escherichia coli bacteria produced from a gene of human leukocytes. (3,4)

Clinical StudiesThe safety and efficacy of peginter-feron was studied in 1,219 adult patients with chronic hepatitis C infection, including patients with genotype 1 (70%) and patients with a high level of titers (>2 million copies/mL). Patients were randomized to interferon alfa-2b 3 million units three times a week or 0.5, 1, and 1.5 mcg/kg of pegin-terferon weekly. The patients were treated for 48 weeks and followed for another 24 weeks posttreatment. The primary end point was undetectable HCV RNA and normalization of liver function tests. The overall response rate was similar for the 1- and 1.5-mcg/kg peginterferon groups. However, these groups had significantly better response rates compared with the interferon alfa-2b group. The reported virologic response was 25% for peginterferon 1 mcg/kg, 18% for 0.5 mcg/kg, and 12% for interferon alfa-2b 3 million units. Additionally, 29% of peginterferon patients experienced normalization of liver function tests compared with 18% of the interferon alfa-2b group.

The overall side-effect profile of peginterferon with or without rib-avirin is similar to interferon alfa-2b therapy, with the most common adverse reactions including flulike symptoms, psychiatric disorders, depression, anemia, neutropenia, thrombocytopenia, and thyroid dysfunction. Patients should be counseled very carefully concerning the route of administration and about taking acet-aminophen and diphenhydramine 30 minutes before each dose at bedtime. (5,6)

OutlookApproximately 85% of patients diagnosed with HCV will proceed to a chronic stage and may require treatment. The use of peginterferon in combination with ribavirin will be the standard of practice in chronically infected patients. Without any treatment, most patients will develop end-stage liver disease or die from hepatocellular carcinoma. HCV kills approximately 10,000 patients every year. 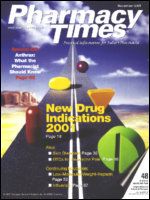