The data describing this interaction have been based primarily on case reports and retrospective studies. Nevertheless, this potential drug interaction presents a risk to patients.

Mechanism of Interaction
VPA is primarily metabolized by glucuronidation to VPA-glucuronide, which is eliminated from the body via bile and urine. However, VPA-glucuronide can be deconjugated by acylpeptide hydrolase to the parent compound VPA.1 The conversion of VPA-glucuronide back to VPA provides for a longer half-life and duration of action for VPA. Although the mechanism responsible for the reported interaction between VPA and carbapenem has been debated, it appears that carbapenems act by inhibiting the activity of the acylpeptide hydrolase enzyme that converts VPA-glucuronide to VPA.2 This results in greater elimination, a shortened half-life, and subtherapeutic plasma concentrations of VPA, all of which represent an uncommon drug interaction mechanism that can produce clinically significant patient outcomes.

The Table3-9 summarizes several of the larger studies of the effect of carbapenems on VPA. In addition, there have been several case reports of subtherapeutic VPA concentrations in patients treated with carbapenems. The magnitude of this interaction ranges from about a 50% to an 80% reduction in VPA plasma concentrations. This reduction has been reported to occur in as few as 24 hours after initiation of the carbapenem. The half-life of VPA is reduced from 15 to 4 hours with concurrent carbapenem administration. It appears that all of the available carbapenems can cause VPA concentrations to decline. Imipenem appears to demonstrate the least effect on VPA, although it clearly can cause a loss of VPA efficacy. 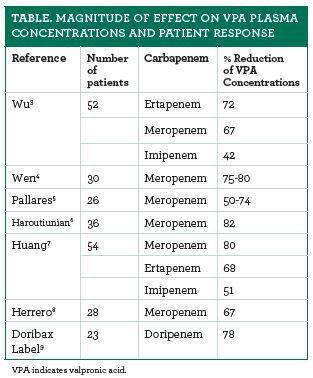 In several studies, patients were noted to have developed increased seizure frequency during carbapenem administration. Although carbapenems have been noted to cause seizures, an acute reduction in the VPA concentration has been associated with status epilepticus and may precipitate seizures in these patients. The carbapenems are eliminated by the kidneys, and this interaction may be more likely to occur in patients with renal dysfunction. Following the discontinuation of the carbapenem, the effect on VPA has been noted to continue for 7 to 14 days. The likely explanation of this prolonged duration of the interaction despite the short half-life of the carbapenems is because of an irreversible inhibition of acylpeptide hydrolase by the carbapenem, resulting in a half-life for recovery of deconjugation estimated to be almost 2 days.10 In nearly all of the reports of this interaction, increasing the dose of VPA did not result in therapeutic VPA concentrations while the carbapenems were coadministered.

Conclusion
The effect of a carbapenem on VPA is significant and may result in reduced efficacy and increased seizure activity. Because of the mechanism of this interaction, increasing the dose of the VPA will unlikely achieve therapeutic plasma concentrations. If possible, an alternative antibiotic should be chosen for patients stabilized on VPA. When a carbapenem is required, additional antiepileptic therapy would be appropriate during carbapenem coadministration and for 1 to 2 weeks after the antibiotic is discontinued.
John R. Horn, PharmD, FCCP, and Philip D. Hansten, PharmD, are professors of pharmacy at the University of Washington School of Pharmacy in Seattle.
References
37414
Valproic Acid and Carbapenem Antibiotics Interaction
The combined use of valproic acid and a carbapenem is likely to occur in patients with central nervous system infections resulting from head trauma or surgical procedures; serious systemic infections, including pneumonia; and generalized seizure disorders.
/publications/issue/2018/October2018/valproic-acid-and-carbapenem-antibiotics-interaction