Fluoroquinolones and Steroids: An Achilles Heel Interaction
2016-04-11 07:53:27
John R. Horn, PharmD, FCCP, and Philip D. Hansten, PharmD
Tendinopathy has been recognized as an uncommon, but potentially disabling, adverse effect of fluoroquinolones. Fluoroquinolones demonstrate excellent tissue penetration, with their concentrations in tissue often exceeding those in plasma. Muscle cells have high fluoroquinolone concentrations, and tendons receive some of their blood supply from the myotendinous junction, which may predispose tenocytes to elevated drug exposure.1 Signs and symptoms of tendon injury include pain, edema, warmth, and reduced joint motility. The mechanism of fluoroquinolone-induced tendon toxicity has not been determined. Several pathologic changes have been noted, including inhibition of collagen and proteoglycan synthesis, increased intracellular oxidative stress, swelling and dilation of cell mitochondria and endoplasmic reticulum, a decrease in tenocyte proliferation, and cell necrosis. 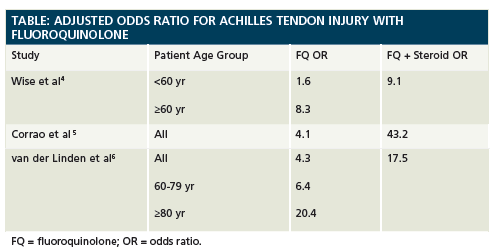 Summary
The potential interaction between fluoroquinolones and steroids may be unlikely, but the risk of a tendon injury during concurrent administration is much greater than that reported with either drug alone. Achilles tendon rupture often results in significant disability, especially in the elderly. All patients receiving systemic steroid therapy who are prescribed fluoroquinolones should be carefully monitored for any signs of tendon injury. Discontinuing the drugs and minimizing activity are suggested until symptoms resolve. It would be prudent to avoid the combination of steroids and fluoroquinolones in elderly patients, particularly those with renal dysfunction or other known risk factors.

Drs. Horn and Hansten are both professors of pharmacy at the University of Washington School of Pharmacy. For an electronic version of this article, including references, if any, visit www.hanstenandhorn.com.
References

19311
Fluoroquinolones and Steroids: An Achilles Heel Interaction
Tendinopathy has been recognized as an uncommon, but potentially disabling, adverse effect of fluoroquinolones.
/publications/issue/2016/April2016/Fluoroquinolones-and-Steroids-An-Achilles-Heel-Interaction