Research has shown that good oral health can have a positive impact on overall health.1 It is no secret that maintaining good oral health is accomplished through an at-home oral hygiene routine that includes the use of a fluoride toothpaste. Pharmacists play an important role in proper oral care by regularly recommending products to their patients and customers. Based on responses from a US-based national survey, it has been estimated that pharmacists make more than 700,000 toothpaste recommendations per month.2 Because of the quantity of recommendations for these products and the variety of products available, it is important that pharmacists understand the differences and benefits of the options available to them and their customers.

One differentiating factor among oral care products such as toothpaste is the active ingredient, fluoride. The most commonly used fluoride sources today are sodium fluoride, sodium monofluorophosphate, and stannous fluoride.3,4 The first 2 forms are effective sources of fluoride ions that remineralize and strengthen weakened enamel to fight cavities. With added ingredients such as potassium nitrate or triclosan, products containing these types of fluorides can also fight sensitivity or gingivitis, respectively.3 By comparison, stannous fluoride not only delivers cavity fighting fluoride, but it also has antibacterial properties that fight plaque and gingivitis, and it provides an anti-sensitivity mechanism of action. Stannous fluoride has both bactericidal and bacteriostatic properties, which fight plaque and treat/prevent gingivitis.5,6 The stannous fluoride also deposits a protective mineral barrier over exposed dentinal tubules to help prevent sensitivity pain from triggers such as hot or cold liquids and foods.7


Treating and Preventing Gingivitis
Gingivitis, the mildest form of periodontal disease, affects more than 50% of the US adult population.9 The condition is marked by mild inflammation of the gums due to plaque buildup. While brushing the teeth or flossing, the gums may bleed. Bleeding can be an important marker of the severity of gingivitis.10 If left untreated, gingivitis can progress to periodontitis, which may eventually lead to tooth loss.11

Stannous fluoride must be properly formulated and stabilized to deliver plaque and gingivitis benefits. A dentifrice containing a stabilized 0.454% stannous fluoride (SnF2) has been clinically proven to help protect against plaque and gingivitis. Its ability to reduce gingival inflammation and bleeding are supported by an extensive body of clinical research.8 In a randomized, double-blind controlled clinical trial examining the prophylactic benefits of stablilized stannous fluoride, Mankodi et al reported a statistically significant and clinically relevant effect on the control and prevention of gingivitis with a stabilized 0.454% SnF2 dentifrice compared with a negative control dentifrice over a 6-month period (see Figures 1 and 2).12 Compared with the control, brushing twice daily with SnF2 was associated with 21.7% less gingivitis (P = .001) and 57.1% less bleeding (P <.001).12 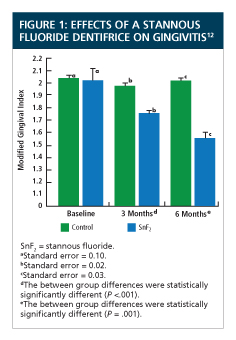 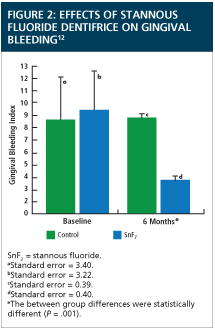 A second randomized double-blind controlled clinical trial added to the body of evidence supporting the anti-plaque and anti-gingivitis benefits of stannous fluoride. Mallatt et al found that twice-daily use of the SnF2 dentifrice (Crest Pro-Health) demonstrated a 16.9% reduction (P <.001) in gingivitis and a 40.8% reduction (P <.001) in gingival bleeding relative to a negative control dentifrice.13


Reducing Tooth Sensitivity
Tooth sensitivity is a common oral health complaint. Approximately one-third of the adult population in North America has experienced dentinal hypersensitivity, and it is thought to be even more prevalent among periodontal patients, with estimates ranging from 72% to 98%.14 Sensitivity results from exposed dentinal tubules, most often due to gingival recession and loss of cementum (a thin layer of tissue covering the tooth root) through erosion, abrasion, or other factors.14,15

Stannous fluoride works by occluding dentinal tubules, inhibiting fluid movement in the tubules, and thus decreasing nerve stimulation. Clinical research supports the benefits of stabilized stannous fluoride dentifrice in controlling dentinal hypersensitivity. An 8-week randomized study by Schiff et al showed a clinically and statistically significant decrease in hypersensitivity with twice-daily use of a stabilized 0.454% SnF2 dentifrice (Crest Pro-Health) compared with a negative control dentifrice containing 0.243% sodium fluoride using tactile (Yeaple probe) and thermal (Schiff Air Index) stimuli for tooth sensitivity assessments. As shown in Figure 3,7 the mean sensitivity score based on the Schiff Air Index for the experimental group was statistically significantly lower than that of the control group at weeks 4 and 8 (P <.0001). The mean sensitivity score based on the Yeaple Probe Index for the SnF2 group was statistically significantly higher (greater tolerance for tactile stimulus) compared with the sodium fluoride control group, indicating a reduction in sensitivity, at weeks 4 and 8 (P <.0001).7 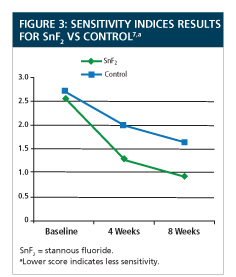 Anti-Cavity Efficacy
More than 90% of dentate adults in the United States have had dental cavities, making it one of the most common oral health concerns. Dental cavities occur when acids produced by bacteria demineralize tooth structure below the surface.16,17 Fluoride is commonly used to protect against cavities by inhibiting demineralization and enhancing remineralization of partially demineralized enamel. When fluoride is incorporated into the tooth structure, it results in a stronger mineral that is less soluble to bacterial acids than the original.18

Stannous fluoride has been shown to effectively support the tooth structure and prevent cavities.8 In a randomized 24-month study of 955 children aged 9 to 12 years, Stookey et al found statistically significantly fewer cavities in participants receiving an experimental 0.454% stabilized SnF2 dentifrice (1100 ppm F) compared with those who received a sodium fluoride positive control dentifrice (1100 ppm F). Among participants who attended at least 60% of supervised visits, reductions in the incidence of cavities over the 2-year period ranged from 17% (P = .019) to 25.5% (P = .002).19 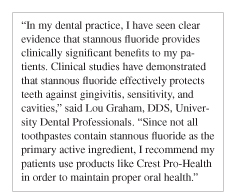 Role of the Pharmacist
Pharmacists can help educate patients on the importance of good oral health, and can play an important role in providing patients the information they need to help make informed purchasing decisions about the variety of toothpaste products available on store shelves. Stabilized stannous fluoride, an active ingredient in some toothpaste products, is an effective decay preventive ingredient with advanced antibacterial properties.5 Pharmacists can advise their patients to consider adding products to their oral care regimen that contain stabilized stannous fluoride, such as Crest Pro-Health, to help protect against some of the most common oral health concerns, including plaque and gingivitis, tooth sensitivity, and cavities.