Helping patients understand and identify anemia's underlying cause can promote adherence to treatment.

Anemia is a condition that develops when your blood does not have enough healthy red blood cells. Red blood cells are responsible for transporting oxygen to your organs. Anemia is considered to be the most prevalent blood condition in the United States. It affects an estimated 3.5 million Americans. Although many cases are mild and easily treated, anemia can range from mild to severe. Some forms of anemia are long term and even life threatening if not diagnosed and treated appropriately.

According to the National Institutes of Health’s National Heart, Lung, and Blood Institute, there are more than 400 types of anemia. In general, the causes of these types of anemia can be divided into 3 groups:

Anyone can develop anemia, but there are many factors that may increase your risk for developing anemia, including:

• A diet lacking in iron, vitamin B12 , and folate

• A history of intestinal disorders (for example, Crohn’s disease and celiac disease) that affect the absorption of nutrients

• Blood loss due to menstruation

• Chronic conditions such as cancer, renal, or liver failure may increase one’s risk of developing anemia, because these conditions may cause a decrease in red blood cells

• A family history of an inherited anemia, such as sickle cell anemia

• A history of certain infections, blood diseases, and autoimmune disorders

Causes of the Common Types of Anemia

There are many types of anemia.

• Iron deficiency anemia is caused by having a shortage of iron in the body. Your bone marrow needs iron to make hemoglobin, which is a protein molecule in the red blood cells. Without enough iron, the body can not produce enough hemoglobin for your red blood cells.

• Anemia of chronic disease is the result of certain chronic conditions such as cancer, HIV/AIDS, rheumatoid arthritis, Crohn’s disease, and other chronic inflammatory diseases. These medical conditions can interfere with the production of red blood cells, which in turn may cause chronic anemia. An individual with renal failure is often at risk for anemia.

• Anemia associated with bone marrow disease can be caused by diseases such as leukemia. These diseases can cause anemia by affecting blood production in the bone marrow. The effects of these types of cancer and cancer-like disorders may range from a mild change in blood production to a complete, life-threatening shutdown of the blood-making process. Other cancers of the blood or bone marrow, such as multiple myeloma and lymphoma, also can cause anemia.

Initially, the symptoms associated with anemia may go unnoticed. They can increase in intensity as the anemia worsens. When a person does not have symptoms, anemia is often discovered during routine blood tests.

The most common signs and symptoms associated with anemia include fatigue or feeling tired and weak, shortness of breath, dizziness, light-headedness, headache, cold feeling in the hands and feet, pale skin, and sometimes chest pain and heart palpitations.

How is Anemia Diagnosed?

Your doctor will probably ask you about your medical history, perform a medical examination, and order a blood test called a CBC (complete blood count) to examine the various types of cells in the blood. Your doctor may also order other tests to determine the type of anemia you have. 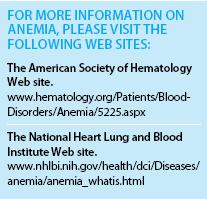 The treatment selected for your anemia depends on the type, cause, and severity of your anemia. Treatment may include changes in what you eat, the use of supplements such as iron, folic acid, or vitamin B12 supplements, certain medications, or a blood transfusion. Your doctor will determine the best treatment plan for your type of anemia. It is important that you adhere to the treatment plan to prevent further complications. You should also schedule routine visits with your doctor to monitor your progress. You should always discuss any concerns with your health care provider.

Although many forms of anemia can not be prevented, your risks of developing iron deficiency anemia and vitamin deficiency anemia may be decreased by eating a healthy, balanced diet. This should include foods high in iron (beef and dark green, leafy vegetables), vitamin B12 (meat and dairy), and folic acid (citrus juices and dark green, leafy vegetables).

You may want to discuss the use of a multivitamin supplement with your doctor. If you have a medical condition and are currently taking any prescription medications, you should always talk to your doctor before taking any supplements, including “alternative” medications, to make sure that they are appropriate. PT