Are Pharmacy Schools Growing Too Fast?
2016-02-16 04:52:15
Meg Crighton, PharmD; Michael Toscani, PharmD; Joseph Barone, PharmD; and John Colaizzi, PhD, RPh
Pharmacy schools have been growing at an unprecedented rate,1 and if the trend continues as expected it could pose problems for the future success of the profession. According to the US Department of Labor, the projected percent change in employment from 2014 to 2024 is currently 3%.2
During the early 2000s, vacancy rates for pharmacist positions reached 8% and higher; by 2004, that number had dropped to 5%.3 In 2013, vacancy rates in hospitals and health systems reached an all-time low of 2.1%, according to the American Society of Health-System Pharmacists.4
Despite a tightening job market for pharmacists, annual pharmacy school enrollments continued to grow between 2001 and 2009, with increases ranging from 3.8% to 10.7%.1 A minimum of 4 new pharmacy schools opened each year between 2005 and 2012,3 and several existing schools expanded, leading to an overall increase in enrollment numbers.1 If enrollment continues to rise, the number of qualified pharmacists may soon outpace job vacancies.
In an effort to determine whether pharmacy school enrollment will indeed surpass need, we compared the relative growth rate of pharmacy schools with that of some other professional doctoral degree schools over the past 20 years (1995–2015).
Where the data come from
Data on first-year enrollment from 1994 to 2014 in each of the US colleges and schools of pharmacy and the total number of colleges and universities were obtained from the American Journal of Pharmaceutical Education.5 Similar data for medical, dental, and law schools were collected for comparison from various sources, including the Association of American Medical Colleges6 for allopathic medical schools, American Association of Colleges of Osteopathic Medicine7,8 for osteopathic medical schools, American Dental Association9 and American Dental Education Association10 for dental schools, and American Bar Association11 for law schools.
Pharmacy schools’ rise
The data revealed that the number of pharmacy schools and the rate of enrollment in those schools have risen more rapidly than those of most other professional doctoral schools (Figures 1 and 2). Over the past 18 to 20 years there has been a 13% increase in the number of law and allopathic medical schools,6,11 an 18% increase in the number of dental schools,10 a 76% increase in the number of osteopathic medical schools,7 and a 70% increase in the number of pharmacy schools.5 The only professional doctoral degree program that has slightly outpaced pharmacy in growth in the number of schools over the past 20 years is osteopathic medicine. 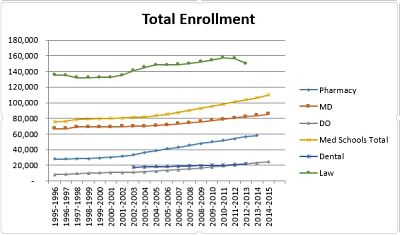 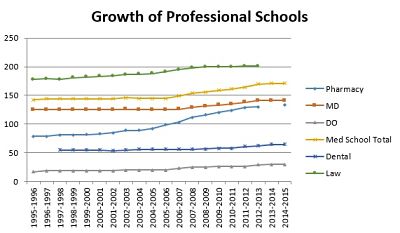 Figure 2
However, the growth in the number of osteopathic medical schools must be considered in the context of growth in the total number of medical schools, both allopathic and osteopathic, because graduates of both programs are prepared for roles as physicians.
The majority of graduates from osteopathic medical schools practice in primary care specialties,12 an area the US Department of Health and Human Services projects will still have significant demand in 2020.13 In addition, osteopathic physicians often practice in rural, underserved communities, fulfilling a vital health care need.12 This helps explain, and perhaps justifies, the rapid growth in osteopathic schools over the past 2 decades.
Law is another area that has experienced a change in employment opportunities. The Bureau of Labor Statistics has projected that approximately 74,000 new jobs will be created for lawyers in the United States between 2013 and 2020.14 However, an estimated 308,000 students are expected to graduate from American law schools during this period of time.14 This grim jobs forecast resulted in 30,000 fewer applications to US law schools in January 2013—a 20% decrease from 2012 and a 38% decrease from 2010.14
If this rapid growth rate for pharmacy schools continues unchecked, and the number of pharmacist positions in traditional and nontraditional roles rises at the current rate, supply may soon outpace demand. This could result in a decline in applications and enrollment, much like what law schools have recently experienced.
How to address the upward trend of schools
Throughout the past decade, there has been a steady increase in the growth rates of both pharmacy schools and overall student enrollment compared with other professional schools in the United States. This trend, coupled with a slower job growth rate in traditional and nontraditional pharmacist roles, is noteworthy and potentially worrisome. It is important for our pharmacy professional societies, schools, and accrediting organizations to monitor these changes carefully in light of the possibility of an overabundance of pharmacy practitioners in the marketplace.
In addition, if major pharmacist employers continue to consolidate—Walgreens has recently announced plans to purchase Rite Aid—this may further result in a plateau effect or shrinking of the available community pharmacy positions.
If these trends are not addressed appropriately, the growing fear of a dearth in future employment opportunities for pharmacists may discourage many students from applying, and both the schools and the profession of pharmacy may suffer as a result.

Meg Crighton, PharmD, graduated from Massachusetts College of Pharmacy and Health Sciences University–Worcester in 2014. She is currently completing a 2-year Acorda Therapeutics–Rutgers fellowship in marketing.

Michael Toscani, PharmD, is a research professor/fellowship director at Rutgers Institute for Pharmaceutical Industry Fellowships at Rutgers, the State University of New Jersey.


John L. Colaizzi, PhD, RPh, is a university professor of pharmacy and former dean at the Rutgers Ernest Mario School of Pharmacy.

Joseph Barone, PharmD, is a professor and dean at the Ernest Mario School of Pharmacy at Rutgers, the State University of New Jersey.


18747
Are Pharmacy Schools Growing Too Fast?
Pharmacy schools have been growing at an unprecedented rate, and if the trend continues as expected it could pose problems for the future success of the profession.
/publications/career/2016/PharmacyCareers_February2016/Are-Pharmacy-Schools-Growing-Too-Fast