Pharmacy Wars: An Era of Acquisition, Mergers, and Losses
2018-03-07 02:01:01
Timothy Aungst, PharmD
All of the recent pharmacy mergers and acquisitions that have occurred in the past 5 years alone between the 3 three chain pharmacies have made this a ride worth recapping. 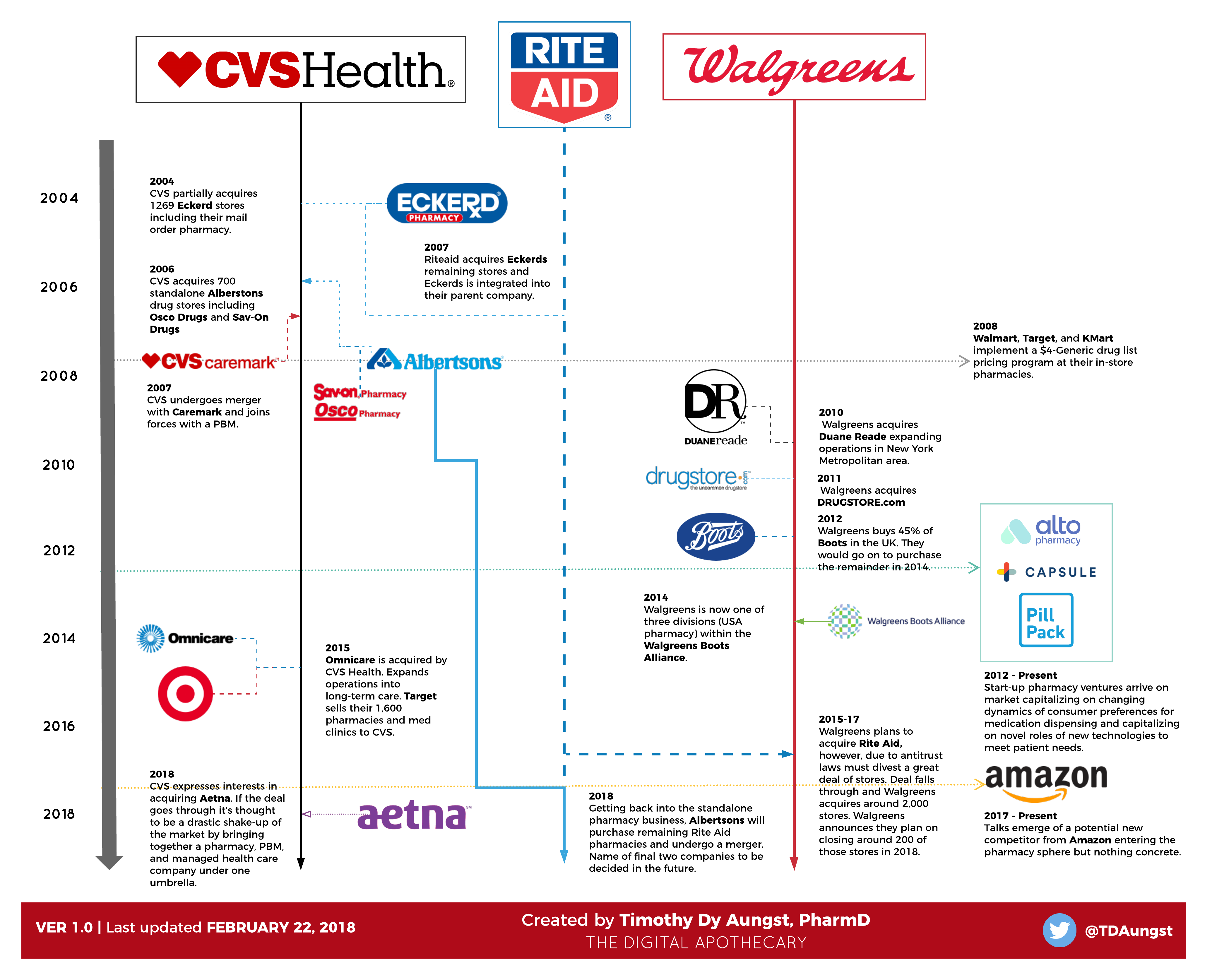 CVS Health has undergone quite a portfolio change, what with changing its name multiple times in the past decade, from CVS to CVS/Caremark, to now CVS Health. Reflecting that emphasis on health, CVS has invested its acquisitions into multiple interesting businesses. They moved on the Target pharmacies, and they bought Omnicare to get into the LTC market. But they've also looked to acquire Aetna, which if it plays out, will be a significant disruptor in this sphere, combining a pharmacy, PBM, and health care management company under one business. It's no surprise that many people think it could either be a big win for patients or potentially a concerning development depending on how things play out.
Walgreens has taken a different model and stayed pretty keen on the pharmacy market alone. Buying out Duane Reade, Boots, and acquiring parts of Rite Aid is leading them to be the largest pharmacy chain in the United States. That hasn't necessarily been all golden. Walgreens wanted all of Rite Aid, but due to concerns, they could not buy all of them and had to cancel the deal. Looking to expand their business model, they also bought Drugstore.com and Beauty.com to increase territory.  Yes, Walgreens is taking some Rite Aid stores (and then plans on closing around 200 of them in 2018), but Alberstons is walking away with the lion's share.
Who is Albertsons? Well, they do have a storied history in the pharmacy business, which I found interesting. The second largest supermarket business in the US (behind Kroger) with companies including Safeway, Acme, Shaw's, and others, they already have their pharmacy, including Osco. What I didn't know was that Alberstons used to have stand-alone pharmacies outside their food stores, Osco and Sav-on Pharmacies. These they sold to CVS back in 2006. Now, we have Alberstons getting back into owning stand-alone pharmacies again, 12 years later. Now, this acquisition/merger will generate a new name. I don't know the new name, but odds are the Rite Aid name won't die out and will still be used in a fashion. I'm sure they aren't going to be getting rid of Rite Aid's pharmacy management system, but rather expand it to the rest of their pharmacies.
It's not just the big 3 who have exciting news. We've also seen newcomers enter the market. Whether they are the new start-ups that many are cheering on to bring a breath of fresh air to a market that has traditionally been overshadowed by the big 3 or related-retail venues, to outsiders we've never considered. PillPack is probably one of the better-known start-ups that are carving out a niche using medication packaging that's been around for decades in a novel mass-market form. Capsule, based in the New York region, is similarly a pharmacy business seeking to bring a touch of personalization that many feel is being lost (not that independent pharmacists have been saying this for some time now as well). But the unknown giant, Amazon, is scary for those entrenched in the pharmacy world.
Known for its master logistical abilities, Amazon has been praised (even before offering any service) for being capable of revolutionizing the field of pharmacy. Everything from faster delivery services, to expanding patient care, to cheaper medications. But as it stands, it's a lot of backroom talks with little to see, at least not for a few years.
This is the pharmacy wars era. We stand on the precipice where those in the pharmacy business have few options to stay ahead of their competitors in a shrinking realm and will need to do several things to keep up, including:
Cost Transparency: Pharmacies are going to need to show that they aren't piling on costs for patients that make no sense. Start-ups are entering this field (Blink Health, GoodRx) since the lack of trust and transparency is so high they can gain a market. For pharmacy companies, this is a big concern. Independents alone are sweating, what with little reimbursement and being hit by costs from all bringers.
Patient Care Services: It's not just drugs, but what else? How can we increase medication adherence or supply clinical services patients want? CVS and Aetna bring the possibility of expanding pharmacists' services through in-store testing and other clinical duties that may be a positive. But we can't just say offering vaccinations or MTM is enough these days.
Logistics and Speed: In an era of on-demand services, how do you get medications to patients faster? Yes, the drive-through window was revolutionary (that is tongue in cheek) decades ago, but that was before the Uber mentality took over. Using digital services to process refills and having someone bring it to your door in a few hours is the new target. CVS and Walgreens know this and are looking to do it because if Amazon decides to start delivering drugs, it will just shake-up everything for Prime members.
I expect to see more consolidation shortly. I think independents are going to get hit hard. New companies are likely going to make a break for it and make their mark on the market, or just hope to be acquired by an outside venture. Patients are angry about drug costs and availability, and savvy businesspeople will find a profit there somehow.
36039
Pharmacy Wars: An Era of Acquisition, Mergers, and Losses
The past decade has seen a large change in the field of pharmacy, with many companies changing the landscape with new mergers and acquisitions.
/contributor/timothy-aungst-pharmd/2018/03/pharmacy-wars-an-era-of-acquisition-mergers-and-losses