The prices of generic drugs have come under scrutiny and become a major point of contention in US health care policy conversations.

Are generic drugs affordable? For years, they were. Generic drug prices either decreased or stayed consistently lower than their brand name counterparts. Now, however, the prices of generic drugs have come under scrutiny and become a major point of contention in US health care policy conversations. In 1984, the American public was granted easier access to generic drugs by the Hatch- Waxman Act. This law provides for an abbreviated, less expensive FDA approval process for generic versions of brand name drugs when those drugs’ patents expire. This approval framework allowed generic drug manufacturers to keep prices low because they did not have the burden of research and development costs.

In the 10-year period spanning from the beginning of 2003 through the end of 2012, the use of generic drugs led to $1.2 trillion in national health care savings, according to the Generic Pharmaceutical Association. Drug market dynamics have since changed.

According to Truveris, a drug pricing research firm, the overall cost of all generics increased by 5% in 2014. When broken down by therapeutic class, the data were more extreme, with certain conditions faring worse than others: the condition states that saw the largest increases in generic drug prices were muscle pain and stiffness (31.9%), inflammation (31.7%), heart disease (23.7%), acne (18.1%), and infections (11.8%).

Pricing data can be broken down even further. An analysis conducted by the pharmaceutical economics blog Drug Channels in November 2014 demonstrated that generic drug price inflation is a reality: although 55% of generic drug prices decreased in the third quarter of 2014, 37% of prices increased. In addition, among the drugs analyzed during this quarter, 77 more than doubled in price. Similarly, data gleaned from the Centers for Medicare & Medicaid Services show that nearly 10% of generic drugs more than doubled in price between July 2013 and July 2014. In the same time period, the prices of more than 1200 generic drugs increased by an average 448%. 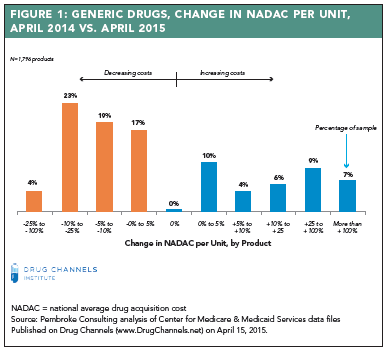 Despite evidence to the contrary, others say that escalating generic drug prices may be easing. In a blog post, Drug Channels CEO Adam J. Fein, PhD, said that during the first quarter of 2015, “Generic drug price increases were low compared to” other recent analyses. “We also found no drugs with mega-increases (exceeding 1000%),” he wrote. Nearly half of the generic drugs in the survey sample (44%) declined in cost, and the median decline was 5.1% (Figure 1).

The volatility of generic prices is a troubling trend for the US health care system. According to the FDA, about 80% of prescriptions filled in the United States are for generic medications, allowing exorbitant price increases to potentially produce a wide ripple effect.

Experts point to several different potential factors behind increased generic drug prices, and most assert that some combination of these factors is responsible for the trend. One common explanation for price increases is industry consolidation and its effect on competition. In 2009, the generic drug market was saturated and profits were projected to decline 1.5%. To mitigate this loss, generic drug makers initiated a series of mergers and acquisitions to consolidate and achieve the scale needed to maintain profitability. This means that as patents expire, there are now fewer generic players in the market to compete for sales and drive down prices. Additionally, low profit margins are discouraging many generic manufacturers from entering the market.

“The retail supply chain has become very fragile,” Dr. Fein said. “Any supply shock to the system, such as a manufacturing problem or FDA action, can rapidly create a shortage because alternative capacity isn’t ramping up to meet demand.”

Each of the major stakeholders in the generic price market conversation became a steadily more active participant during 2014—a trend that looks likely to continue throughout the remainder of 2015 and into 2016. In October of 2014, members of Congress, led by Sen. Bernie Sanders (I-VT) and Rep. Elijah E. Cummings (D-MD), sent letters to 14 generic drug manufacturers to get answers for the rising costs.

“When you see how much the prices of these drugs have increased just over the past year, it’s staggering, and we want to know why,” said Cummings in reference to the letter. Cummings and Sanders included in their letters the following data from the Healthcare Supply Chain Association on the recent purchases of 10 different generic drugs by group purchasing organizations within the last 2 years:

The increased pricing associated with the smaller number of players in the generic market has left some concerned that several companies hold a virtual monopoly over the production of certain drugs. In response, the Department of Justice issued subpoenas in November 2014 to representatives from 2 generic drug manufacturers, Impax Laboratories and the Lannett Company, regarding investigations into possible antitrust law violations and generic drug pricing. In the latter half of the month, the Senate Subcommittee on Primary Health and Aging also held a hearing on the rising costs of generics. Although executives from 3 generic manufacturers were invited to speak before the panel, all declined to testify.

“We’ve got to get to the bottom of these enormous price increases,” Sanders said at the hearing. “It is unacceptable that Americans pay, by far, the highest prices in the world for prescription drugs. Generic drugs were meant to help make medications affordable for the millions of Americans who rely on prescriptions to manage their health needs, and now some of them are becoming unaffordable.”

Also in November 2014, Sanders and Cummings introduced the Medicaid Generic Drug Price Fairness Act. The legislation would require drug manufacturers to pay a rebate to Medicaid when their generic drug prices increase at a rate that outpaces inflation. This penalty already applies to brand name drugs. The bill failed to pass by the end of the 113th Congress.

After several months on hiatus, however, momentum has been gaining for the act: this past May, Sanders and Cummings reintroduced it in both houses of the 114th Congress to curtail the unbridled cost of drugs. Cummings said the federal bill serves as a response to concerns raised by physicians, hospitals, pharmacies, and patients over drug manufacturers’ increasing generic drugs prices without an explanation. 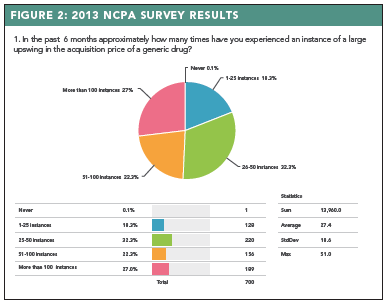 In a 2013 survey conducted by the National Community Pharmacists Association (NCPA), 87% of pharmacists said it took at least 1 month for reimbursement rates to adjust in accordance with an increased generic drug acquisition cost. Ninety-three percent of respondent pharmacists also reported that the situation has grown worse since the survey (Figure 2).

“For decades, community pharmacists have promoted the appropriate use of generic drugs to lower costs. However, more recently, the price for some of these medications has skyrocketed 1000% or more virtually overnight, while reimbursement rates paid to community pharmacists have inexcusably lagged behind for weeks or months,” stated NCPA CEO B. Douglas Hoey, RPh, MBA. “This survey finds that this problem has only grown more severe over the past 2 years and requires urgent attention from federal and state policymakers.”

Most recently, following a request from Sanders, the Office of the Inspector General (OIG) of the US Department of Health and Human Services announced it intends to conduct an inquiry into generic drug price increases on the Medicaid drug rebate program. Specifically, OIG plans to investigate price increases between 2005 and 2014 to determine if the rising costs outpaced the inflation rate.

Impacts: Past, Present, and Future

Most predict that generic drug prices will continue to rise through the coming years, which will likely pose significant challenges for patients, providers, insurers, and manufacturers alike. The FDA’s Office of Generic Drugs has a backlog of pending generics approvals that is at least 2.5 years.

One of the major problems stemming from high-priced generics is the resulting adherences and access issues. According to H. Robert Silverstein, MD, FACC, medical director of Preventive Medicine Center in Hartford, Connecticut, “The availability of medications and their price have created important problems…simply putting some medications out of reach for patients.”

Nonadherence often leads to readmissions for patient, and with health systems now being held accountable under the Affordable Care Act’s value-based penalty model, both patients and providers stand to lose.

As for future solutions, Dr. Silverstein suggests, “Those people/corporations with positions, like insurance companies and Medicare (CMS), should negotiate with the manufacturers what they will or will not pay for medications.” Currently, Medicare is barred from negotiating drug prices with manufacturers for Part D prescriptions.

Robert Giles, Jr, PharmD, manager of formularies at BlueCross BlueShield of Tennessee, said the company “will continue to closely monitor generic drug pricing to provide the best care and value to members. In some cases, this could mean particular generics either aren’t added to our formulary or some could be removed if there are alternative products with more reasonable pricing.”

Some contend that the pursuit of a sustainable solution could be thwarted by the considerable amount of money at stake. At the American Medical Association’s annual meeting last month, John S. Antalis, MD, a Georgia delegate, asserted “PBMs [pharmacy benefits managers] don’t lose in this situation…They’re taking money from health care plans; taking money from patients, more importantly.”

In the United States, overall prescription spending increased by 13.1%. The skyrocketing prices of generics, however, is of particular concern for many patients, employers, insurers, and lawmakers. In observing macro industry trends, including consolidation, regulation, and formulary strains, the generic price inflation will place extended pressure on American patients.