Student leaders from Touro College of Pharmacy walked away with numerous top awards and scholarships at the conclusion of the 2015 Student National Pharmaceutical Association national conference. 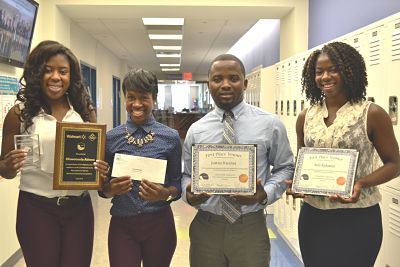 Student leaders from Touro College of Pharmacy (TCOP) walked away with numerous top awards and scholarships at the conclusion of the 2015 Student National Pharmaceutical Association (SNPhA) national conference held in July in Orlando, Florida.

SNPhA is an association of pharmacy students concerned about pharmacy and health care-related issues and the lack of minority representation in pharmacy and other health professions. SNPhA members work in the community to help reduce health disparities.

“We are very proud of the outstanding achievements of our students. Excellence in pharmacy skills, leadership, and community involvement define this year’s awardees,” said Dr. Zvi Loewy, interim Dean of the Touro College of Pharmacy. “We congratulate our students and express much gratitude to their advisor, Dr. Joyce Addo-Atuah, for her tireless efforts and very caring mentorship.”

Taking first place in the Kroger Clinical Skills Competition, competing against teams from 20 other pharmacy schools around the country, were second-year TCOP student and SNPhA President-elect Justice Kwansa and teammate Sefa Kploanyi, a third-year TCOP student and Operation Immunization Initiative chair of SNPhA. They each received $1000, an iPod, a $195 Amazon gift card, and a 1-year subscription to Lexicomp, a valuable online pharmacy resource.

The Kroger competition is an opportunity for students to display their expertise in analyzing and reviewing a patient case and presenting recommendations on treatment. It is a 2-day competition, and the 3 schools that make it to the finals finish off on the second day.

On the first day, each team is given notes on the same case study. In this year’s competition, the case involved a pregnant patient with several disease states who was on multiple medications that were not working. The students had 90 minutes to come up with effective therapy recommendations.

On the second day, the 3 teams in the final round defended their recommendations to a medical team of board-certified pharmacists acting as judges, and then were observed interviewing and counseling a live pregnant patient.

Kwansa said they were very happy to have won and were extremely grateful to their professors.

“They prepared us for the real world,” he said. “You have to be fast and know your stuff. There cannot be medication errors. With pregnancies, there are 2 lives. It’s serious, and it’s humbling.”

Fourth-year TCOP student and SNPhA President Basirat Adeyemi also won the 2014-’15 National Pharmaceutical Association (NPhA) Foundation-Rite Aid Endowment Scholarship Award of $2000. Sponsored by the NPhA (the parent association of SNPhA) and Rite-Aid, the award recognizes students who have demonstrated leadership and community service and a general dedication to promoting the profession of pharmacy.

Fourth-year student Olawonuola Abiona received a plaque of recognition for her outstanding work in coordinating, advertising, and organizing the Walmart and Sam’s Club Prescription for Service Competition, which attracted competition from 31 pharmacy schools across the country. The contest provides funding for SNPhA student teams to make an impact in underserved communities while developing community service, teambuilding, and leadership skills among the contestants.

Abiona also won the Dr. Horace and Ethel Bynum Endowed Scholarship of $1000 for Outstanding Academic Performance. Abiona has maintained a high GPA at TCOP, while serving in several leadership positions in SNPhA and in other student organizations. She is a member of the TCOP chapter of the Rho Chi Society, the academic honor society in pharmacy. She also won the SNPhA National Officer Award for her outstanding national service as the organization’s Region V Facilitator, where she coordinated the activities of SNPhA chapters in 9 pharmacy schools on the West Coast.

Associate Professor Joyce Addo-Atuah, PhD, faculty advisor to TCOP’s chapter of SNPhA, expressed pride in the TCOP students’ achievements and said membership in the chapter has grown since the awards were announced from a paid membership of 60 last year to approximately 100.

“Participating in SNPhA gives our students the opportunity to showcase their talents and implement programs that improve health, while developing leadership and professional skills, participating in national health care issues, and educating our communities about disease and better health care practices,” said Dr. Addo-Atuah. “This is part of the organization’s and TCOP’s mission.”