Study: Lorlatinib and Crizotinib Have Comparable Time to Treatment Deterioration in Patients With ALK-Positive NSCLC

The time to treatment deterioration (TTD) in pain in chest, dyspnea, and cough was found to be comparable between patients who received lorlatinib and patients who received crizotinib, according to the patient-reported outcomes (PROs) of the phase 3 CROWN study presented at the International Association for the Study of Lung Cancer (IASLC).

The researchers enrolled 296 patients with ALK-positive NSCLC, randomly assigning them to receive either lorlatinib or crizotinib. They then assessed the PROs using the European Organization for Research and Treatment of Cancer Quality of Life Questionnaire (QLQ)-C30 and QLQ-LC13, as well as the 5-level EQ-5D version, in order to assess the health-related quality of life (QOL) of patients participating in the trials.

The assessments were then completed by patients on the first day of each 28-day cycle within the trial, which continued through to the end of the patients’ treatment. Researcher Julien Mazieres, MD, PhD, of Toulouse University Hospital, in Toulouse, France and her team measured TTD in pain in chest, dyspnea, and cough and compared the results between each treatment arm.

The researchers found that the completion rates were 100% at baseline and remained high through cycle 18 in both treatment arms. Additionally, they did not find clinically meaningful or statistically significant differences between the treatment arms in any functioning domain. They did observe numerical improvements that favored lorlatinib in measurements of physical, role, emotional, and social functioning, as well as a numerical improvement that favored crizotinib for cognitive functioning.

In both treatment arms, lung cancer symptoms were found to improve from baseline, with clinically meaningful improvements in symptoms of cough as early as during cycle 2, which was then maintained through to cycle 18.

"Time to treatment deterioration for lung cancer symptoms was comparable between treatment arms. Improvements in lung cancer symptoms were seen early and clinically meaningful improvements in cough were detected in [patients who received] lorlatinib," said Mazieres in a press release. "Patient-reported outcomes in phase 3 CROWN support the improved PFS and are consistent with safety/tolerability of lorlatinib relative to crizotinib." 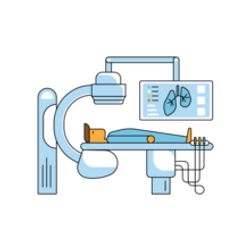