Pharmacy Fun Fact: What Cocaine-Infused Health and Wellness Drink Was Thomas Edison a Fan Of?

What drink in the 19th century was created by infusing coca leaves into a bottle of Bordeaux?

Question: What drink in the 19th century was created by infusing coca leaves into a bottle of Bordeaux? 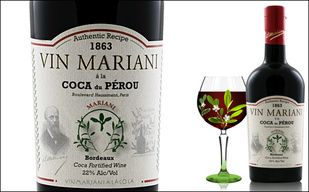 In the 19th century, a French chemist named Angelo Mariani created a wine tonic that “fortifies and refreshes body and brain,” which he dubbed Vin Mariani. Mariani made the concoction by dumping coca leaves into a nice bottle of Bordeaux, and to his delight, the tonic that emerged provided quite an enjoyable effect.

The drink, containing 10% alcohol and 8% cocaine, was a huge hit. Used to promote general health and wellness, it was particularly enjoyed and endorsed by writers such as Arthur Conan Doyle, Jules Verne, Alexandre Dumas, Henrik Ibsen, and Robert Louis Stevenson.

Thomas Edison was also a fan of the drink, noting its ability to help him stay awake and clear headed while working on projects throughout the night. Since Edison was purported to sleep only 4 hours each night, Vin Mariani may have had a role to play in his ability to keep alert.