How Secure Is the US Drug Supply?

Concerns abound because of an overreliance on foreign sources for active pharmaceutical ingredients, excipients, and finished dosage forms.

In the January issue, I addressed the management of drug shortages and the benefits of having an effective team of hoarders to ensure access to critically needed drugs.

Concerns about the overall security of the US drug supply is another important aspect that receives a considerable amount of press because of an overreliance on foreign sources for active pharmaceutical ingredients (APIs), excipients, and even finished dosage forms (FDFs). The United States is the single largest pharmaceutical market in the world. However, the United States trails other countries in terms of APIs supplied by our own domestic industry.1 Many individuals are concerned particularly about our reliance on Chinese manufacturers. Two recently published books, China Rx by Rosemary Gibson and Bottle of Lies by Katherine Eban, have introduced these concerns to the lay public. So, how real is this risk?

Industry sources have been quoted to estimate that 80% of APIs for US pharmaceutical products are manufactured abroad, the majority in China and India.2-5

According to the UK Medicine and Healthcare Regulatory Agency, 40% of the global production of APIs occurs in China.2

A World Health Organization report from 2017 says that China has emerged as the leading supplier of APIs to the global pharmaceutical market and indicates that represents about 20% of global API output.6 The exact level of dominance of the API market by China appears to be unclear, and this is particularly true for the US domestic market. During recent testimony before Congress, FDA officials reported on the number and international distribution of registered API manufacturing sites for US-approved drug products.7 US manufacturers represent 28% of the registered sites, followed by European manufacturers at 26%, and India at 18%. China has 13% of the registered API manufacturing sites for US-approved products. However, these data do not reflect the proportion of APIs manufactured in each country or region for several reasons. First, being listed does not mean the site is actually manufacturing APIs. Also, not all APIs manufactured in the United States are used for FDFs that are used in the United States, and manufacturers are not required to report to the FDA if they are actually producing APIs or the amount of APIs being produced. The bottom line is that in the United States, there are no governmental reporting requirements to allow an accurate estimate of the overall sources of APIs. It is also not possible to know the relative contribution of different API sources used by foreign manufacturers who export FDFs to the US market. For example, although India has more FDA-registered API manufacturers than China, the Chinese have overtaken India in total API manufacturing, and China is reportedly now the largest supplier of APIs for the pharmaceutical industry in India.6-8 Clearly, China is a dominant force in the global and US market for APIs used in the manufacture of pharmaceuticals. A major disruption of this supply chain could leave the United States very vulnerable, and that is not an inconsequential consideration in this foreign policy and political environment.

The other concern about Chinese dominance in the API marketplace is quality. It is no secret that the Chinese pharmaceutical industry has struggled with quality and safety issues exacerbated by lax regulatory oversight. The most recent information indicates that the FDA has 22 inspectors in China, with more than 5000 manufacturers to be inspected.4

Senator Chuck Grassley (R-Iowa) has said that fewer than 1 in 5 foreign human drug manufacturers were inspected in 2018,3 and that proportion is much lower in China.

In addition, unlike inspection of US manufacturers, inspections abroad are conducted with prior notice. These expected, scheduled inspections are more prone to fraud and cover-up related to safety issues. These safety issues pose a significant risk to the US drug supply. More than a decade ago, contaminated heparin APIs from China resulted in at least 81 deaths in the United States. More recently, contamination with a potential carcinogen has resulted in the recall of numerous generic products, including essentially all angiotensin-receptor blockers and several H2-receptor antagonists. There is concern that fraud and manipulation of quality data are endemic in China.4

Rosemary Gibson has indicated that cost cutting by the drug industry is the true culprit for lowered safety standards and that “globalization is de facto deregulation.”2

So, is it all doom and gloom? Are we at the mercy of the Chinese for our drug supply, and should that keep us up at night? Well, it turns out there is another side to this coin. First, the Chinese are as dependent on the global pharmaceutical industry as the industry is on China. Cutting off API supply may be a pact for significant mutual harm. China is the second-largest pharmaceutical market in the world, with sales in excess of $100 billion, with about 20% of that market being innovator-, patent-protected drugs. Multinational originator companies dominate the new drug product market in China, whereas domestic companies dominate the supply of generic drugs. China is also a substantial importer of APIs used in domestic formulations, and the United States is the largest source of imported APIs. In 2014, China exported $3 billion in FDFs and $26 billion in APIs but also imported $12.6 billion in FDFs and in 2015, imported $8.5 billion in APIs and $4.9 billion in biochemicals.6 China’s industry is very dependent on the global pharmaceutical market.

Noncommunicable diseases are on the rise in China because of its aging population, and access to the most effective therapies is a high priority for China and its citizens. In China, patients with cancer lack access to the most effective treatments, and cancer survival rates in China are less than one-half those in the United States. The Chinese government increasingly recognizes that there is a tight link between legitimacy and performance, and a failure to deliver on public goods and services, including quality health care, may undermine the government’s legitimacy. Recently, the Chinese government has dramatically reduced import value-added taxes and import tariffs on cancer drugs and other more common drugs.4 To access the most

effective treatments, engagement of the international and US pharmaceutical industries is vital.

Finally, in recent years, the Chinese equivalent of the FDA has begun to implement increased standards for quality and safety. The introduction of the Generic Consistency Evaluation has introduced standards to determine “equivalency” to branded drugs for efficacy and safety. Failure to meet Generic Consistency Evaluation standards can lead to revocation of licensure. The recent outcry, because of substandard domestic vaccines in China has further emphasized the need for reform,2 and there is evidence that the country is slowly moving in the direction of greater regulatory oversight.

Although the interdependence of the complexity of the global pharmaceutical industry and the drug supply is not likely to put the United States at immediate risk of being “cut off” by API suppliers, such as China, the nation’s drug supply continues to represent a national security risk. As was detailed in recent FDA testimony, there are 3 main factors that need to be addressed: dependence on foreign API sources; reliability of the manufacturing base that produces APIs for the US market; and resiliency for the US manufacturing base if there were a disruption in critical API sources.

In recent testimony before the House Committee on Energy and Commerce, Subcommittee on Health, Janet Woodcock, MD, director of the FDA’s Center for Drug Evaluation and Research, emphasized the importance of advanced manufacturing technologies, such as continuous manufacturing and 3-dimensional printing as examples of how the US industry could be more competitive and begin to return manufacturing to domestic facilities.7 These issues need to be a national priority.

Curtis E. Haas, PharmD, FCCP, is the Chief Pharmacy Officer for the University of Rochester Medical Center in New York. 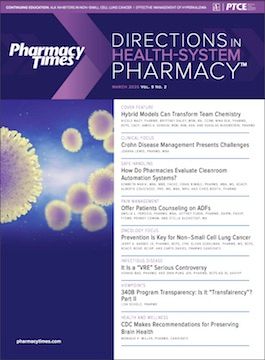