Generics Outlook: Turning to Innovation After the Patent Cliff

As 2018 signals the end of the patent cliff and branded generics face tougher competition from nonbranded manufacturers, companies are diversifying their portfolios and focusing on innovation to ensure long-term viability.

As 2018 signals the end of the patent cliff and branded generics face tougher competition from nonbranded manufacturers, companies are diversifying their portfolios and focusing on innovation to ensure long-term viability.

For the generics industry in 2012, a steady flow of key patent expirations and new health care regulations brought good news to manufacturers, while millions of US consumers also benefited from lower-cost medicines used to treat a variety of common ailments.

The use of generic drugs saved the US health care system $1.07 trillion over the past decade, according to a 2012 analysis by the IMS Institute for Healthcare Informatics. Approximately 45% of these savings came from generic drugs that entered the market since 2002, many of which became available months and even years before the expiration of the counterpart brand drug as the result of a patent settlement.

Figures from IMS’s May 2013 report, “Declining Medicine Use and Costs: For Better or Worse?,” show that generics contributed $8 billion to spending growth in 2012. Further, patent expiries for products used by millions of patients have contributed to a 30% rise in the share of generic prescriptions over the past 10 years. Generics now make up 28% of total spending, and generics are now dispensed 95% of the time when a generic form is available, up 1% from 2011, according to the report.

Despite a projected lull in the patent cliff for the remainder of 2013 through 2015, key patents will continue to expire in the years through 2018. Additionally, the passage of the Affordable Care Act—most of which goes into effect in 2014&mdash;and the growing use of medications by the aging population have ensured the health of the generics industry in the immediate future.

However, as 2018 signals the end of the patent cliff and as branded generics face tougher competition from nonbranded manufacturers, companies are taking strategic steps to diversify their portfolios and focus on innovation to ensure long-term viability for the future. 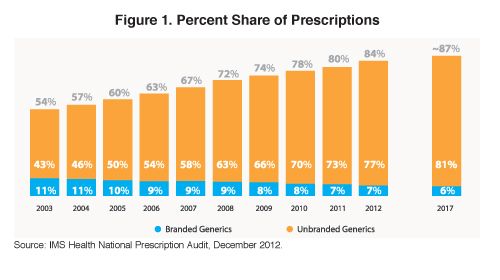 Government projections show that the average annual growth in health care spending will be 6.2% per year through 2018, outpacing annual growth in the overall economy by 2.1% per year, and comprising one-fifth of the nation’s gross domestic product.

Citing figures from the National Health Expenditure Accounts, the Generic Pharmaceutical Association (GPhA) reports that while overall health care costs will continue to grow at a rate that is higher than the economic growth rate within the country, the growth in drug spending is slowing down because of the continued increase in the use of generics.

For the first time in 20 years—as a result of the increased availability of lower-priced generic prescription drugs&mdash;the cost of treating common ailments such as diabetes, high cholesterol, and high blood pressure decreased in 2012, according to figures reported by GPhA.

Meanwhile, specialty medications, such as those used to treat arthritis, cancer, and hepatitis C, jumped 18% in 2012. Still, the use of generics offset the higher costs associated with these specialty medications, resulting in a modest 2.7% increase in overall drug spending, according to the 2012 Drug Trend Report by Express Scripts.

“The costs of medicines for millions of Americans are actually declining quite rapidly, and at the same time, the cost for a very few who have very rare disease treated by special medications may be going up,” says Michael Kleinrock, director, research development, IMS Institute.

The generics space has seen a tremendous evolution from 1984—when generics composed 18% of prescriptions&mdash; to 2011, when they were 80%. That number rose to 84% in 2012. The massive change is reflective of payers’ keen understanding of the generics industry as a tool for them to deliver lower costs while also enabling them to afford higher-cost medicines for other patients.

“Because we saved over here we can spend over there, and that’s an important part of how we balance health care spending,” says Kleinrock. “The result of that balancing act is that sometimes, you actually see things overbalanced. That means we see drug spending actually decline as a result of these patent expiries.”

Patent expiries will save payers in developed markets $127 billion in the next 5 years, primarily in the United States, according to IMS’s July 2012 report, “The Global Use of Medicines: Outlook Through 2016.”

“This will be offset by $21 billion of expected generic spending, resulting in a $106 billion ‘patent dividend’ in 2016,” the report states. “In the US, $103 billion, or 44% of 2011 brand spending will shift to generics at dramatically lower prices.”

The savings that generics have provided, especially in the larger, more popular therapeutic areas, is an important part of mitigating increasing health care costs and helping alleviate some of the fiscal pressures patients face in the wake of the challenging economy.

“Patients’ health care costs and their exposure to them has a direct impact on their ability and willingness to pay, even if they’re sick,” Kleinrock says. “So these savings are an important part.”

As a result, patients are rationing their care in inappropriate ways as fewer are visiting their doctors. The industry has also recorded fewer elective hospitalizations and elective surgeries, while the number of emergency department visits, consequently, has continued to increase, Kleinrock notes.

Additionally, insurance designs and insurance plans are changing to reflect the economy and the effects of new regulatory controls. “If patients want to have lower premiums, often they’re facing a higher out-of-pocket cost, either through a deductible or coinsurance or higher copays, and they sign up for those because the premiums are lower, and they’re more affordable,” Kleinrock says. “But then they face these higher out-of-pocket costs.”

IMS’s May 2013 report states that “Rising copays or co-insurance are linked to increased abandonment and poorer adherence while, conversely, patients who pay less out of pocket are less likely to abandon medication and more likely to stay on therapy” (Figure 2). 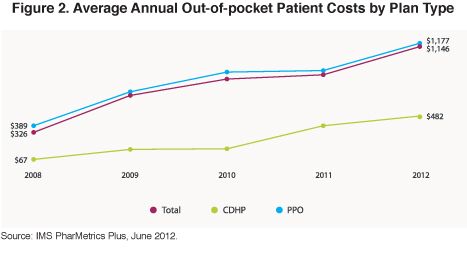 Christine Simmon, senior vice president of GPhA, says that insurance plan design changes, however, include some benefit to the generics industry. “A lot of plan design changes are made with the intent to encourage generic utilization by reducing generic copays or increasing brand copays or requiring that there be prior authorization and other tools to control costs,” says Simmon.

“Generics are a primary component of the adherence because if your medications [cost] less money, you’re more likely going to stay on them,” which creates a win-win for patients and the generics industry, Simmon says. “Generics bolster adherence, and adherence bolsters generics.”

The Affordable Care Act will also add newly insured patients to the pool of prescription drug users once most of the regulations go into effect in 2014.

“Many of those people who were previously uninsured had health care needs that were being unmet by prescription drugs, so they represent new patients as well as newly insured patients,” Simmon says.

Stemming from a major period of drug innovation that occurred in the late 1990s and early 2000s, the beginning of the “patent cliff”—or the cluster of time in which a number of significant name-brand drugs lose patent protection&mdash; has been a boon for the generics industry for the past 5 years.

From 2011 into 2012, the key therapeutic area with the most impact for the generics industry was cholesterol, with the Lipitor patent expiring in November 2011. The impact continued through the first half of 2012, but competition increased in late May 2012, as more companies began marketing generics, driving down prices and generating savings for patients.

“Some of the major drugs [in 2012] include Lexapro and Seroquel for depression, Singulair for asthma, and Actos for diabetes,” says Jennifer Luddy, spokeswoman, Express Scripts.

“The biggest, of course, was Plavix, an anticlotting medication. As a result of the increased availability of more affordable generics alternatives, we saw unit costs decrease and utilization increases in these categories” (Table 1). 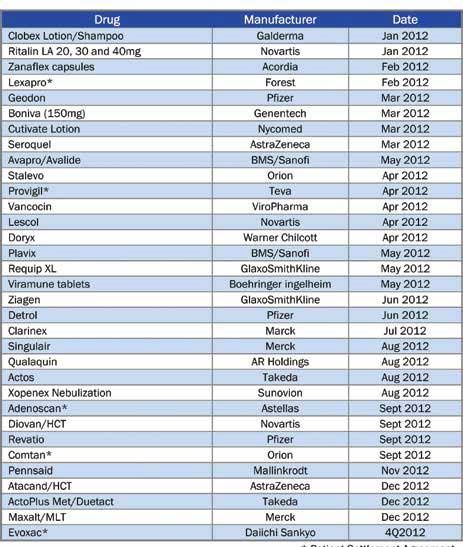 Looking toward the remainder of 2013, the industry will experience a lull in the number of patents to expire, although a handful of brands expiring in the second half of 2013 and in 2014 will provide opportunities for generics. By 2015, however, another cluster of popular drugs will see their patents expire, notes Kleinrock.

“The 5-year period, basically from 2013 to 2017, is one of the biggest periods we will ever see,” Kleinrock says. “The only period bigger than that is the last years, so it’s still a big period of patent expiries” (Table 2). 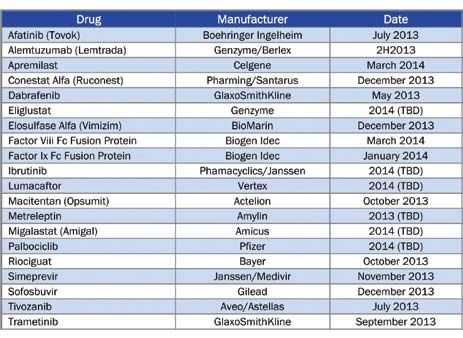 Further genericization of drug usage is not expected beyond 87%, according to IMS’s May 2013 report. As the report notes, in recent years, branded generic medicines have been facing competition from unbranded generics, and share of prescription volume has steadily declined.

This has caused most generics companies to look strategically at the long term and at how to replace those revenues when molecules become more competitive and when they face greater competition within the generics sector.

Expansion, Innovation, and a Look at Biosimilars

Kleinrock notes that the higher number of consolidations among generics companies over the past several years is one solution generics companies have devised to weather the storm following the patent cliff—but it is only one of them.

Companies like Teva Pharmaceutical Industries have been diversifying into originator products, partly through mergers and acquisitions over the past few years.

Generics companies are also targeting geographic expansion, and since very few of them operate in a truly global sense, a range of countries are available to consider for expansion. In these areas, generics companies would have an advantage over small, local manufacturers because they have a global scale, regulatory affairs capabilities, and large manufacturing capacities, which help with their margins.

North Africa and the Middle East are emerging markets for the health care industry in general, notes Kleinrock. “They have been relatively underserved, so they are growing, and they’re certainly attractive markets for a variety of reasons,” he says. “There’s been some uncertainty, particularly in North Africa, with the Arab Spring. It’s hard to do business in a war zone.”

“It’s not just the governments’ intent to boost their generic industries for manufacturing; they’re also interested in boosting that industry for final goods and sales in their own countries,” says Kleinrock. “But there is still a place for international companies in all of these markets.”

Revitalizing their product portfolios is another strategy on the radar for generics companies, which are looking to develop biosimilars that require specialized skills. Often, these skills are acquired through mergers, acquisitions, or single partnerships. “The result is that they then have those skills and can compete,” Kleinrock notes. “Often there are fewer competitors in these markets.”

Opportunities in biosimilars would not only ensure the health of the generics industry but also result in further savings for health care consumers. A financial model developed by Express Scripts is projecting that the United States would save $250 billion between 2014 and 2024 if just a handful of biosimilars were to enter the market.

Generics manufacturers might also pay attention to the pathway to FDA approval that Teva recently took for tbo-filgrastim, its biosimilar version of Neupogen, which the company can begin marketing in late 2013. As Kleinrock notes, Teva had not applied for biosimilar approval in the legal sense, opting instead to file for approval using the FDA’s standard drug approval process, since rules for biosimilars were still unclear at the time.

“They were able to move through this process sooner and be guaranteed of a position in the market in an earlier time frame,” Kleinrock said. “Many companies look at each other and take cues from each other about what works and what doesn’t. They’re all very aware of the choices they have in front of them for developing their programs, and certainly, there are a bunch of opportunities coming.”