This chronic, painful disorder has a complex symptom profile that can make diagnosis and treatment complicated.

This chronic, painful disorder has a complex symptom profile that can make diagnosis and treatment complicated.

Fibromyalgia has been—and still is&mdash;a controversial diagnosis; many believe it is more appropriately aligned with psychiatric conditions or other disorders. Regardless, the American Medical Association recognized its validity in 1987, and in 1990, the American College of Rheumatology (ACR) published diagnostic criteria.1,2 Today, fibromyalgia is the second most common disorder seen by rheumatologists, the first being osteoarthritis.3

Fibromyalgia’s core symptoms include widespread diffuse pain and heightened pain sensitivity to various stimuli, such as pressure, noise, cold, and heat, at threshold levels not considered aversive; and an absence of inflammatory or structural musculoskeletal abnormalities.4 Widespread pain, defined as pain on both sides of the body and above and below the waist for a duration of at least 3 months, must be present in 11 of the 18 designated locations that are outlined in the ACR diagnostic guidelines.2

Disability from fibromyalgia ranges from mild to severe, and up to 90% of patients report difficulty with activities of daily living and household tasks. Many patients manifest balance problems, which increase the risk of falling. One small study found that patients with fibromyalgia fell 6 times more frequently than controls.8 Etiology Fibromyalgia’s etiology remains unknown, but a genetic component is implicated.9 Although many patients believe past trauma is a causative factor, studies have failed to find an association.6 Research findings suggest fibromyalgia is a neurosensory disorder—not a musculoskeletal or a psychiatric disorder.10 Patients appear to have an imbalance in excitatory and inhibitory neurotransmitters, which helps explain patients’ pain sensitivity and fatigue. Studies also confirm abnormalities in blood flow to the cingulate cortex, thalamus, and basal ganglia.9

Accurate prevalence is not known, but the Centers for Disease Control and Prevention estimates fibromyalgia’s prevalence at 2%, affecting 5 million adults.11 Most patients receive the diagnosis during middle age, and women are disproportionally affected (female-to-male ratio, 7 to 1).6 Co-occurrence with other rheumatic disorders, such as rheumatoid arthritis, systemic lupus erythematosus, and ankylosing spondylitis, may be as high as 65%.11 Comorbid affective disorders and anxiety disorders are also common.12 Adults with fibromyalgia are 3.4 times more likely to have symptoms of major depression.11

Diagnosis can be challenging because pain waxes and wanes and patients have seemingly unrelated symptoms on presentation, such as insomnia, weight fluctuations, nasal and sinus congestion, hearing and visual distortions, dry eyes and mouth, shortness of breath, syncope, and hypotension.13 Many patients also experience cognitive impairment resulting in decreased attention and performance. The average duration of symptoms before a diagnosis of fibromyalgia is made is 5 years.14,15 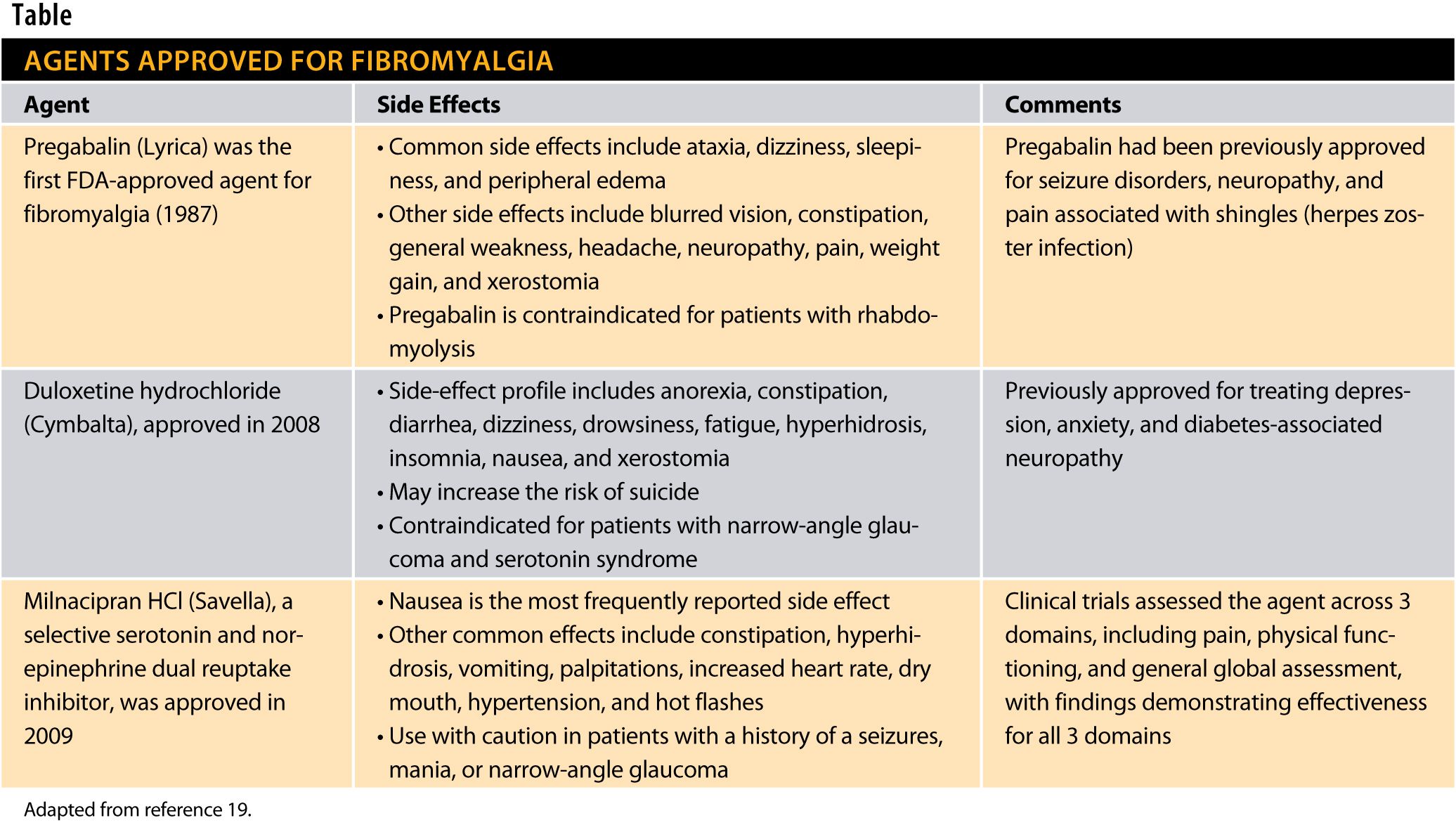 Treatment for fibromyalgia targets the several symptom domains of the disease, namely pain, psychiatric comorbidities, fatigue, physical disabilities, and other related symptoms.16 Effective treatment provides a range of interventions, including pharmacotherapy, psychological therapy, and exercise. Because of symptom variability, a patient-centered approach is required, consisting of realistic goals and patient education. Treatment outcomes and effectiveness are measured by changes in pain, effective coping skills, disability, and overall quality of life.

Because fibromyalgia is a chronic, centrally mediated pain disorder and not an inflammatory response, corticosteroids, nonsteroidal anti-inflammatory drugs, and opioids are ineffective. Tramadol lessens fibromyalgia pain, probably because this weak opioid agonist has effects on serotonin and norepinephrine receptors.17 In many postmenopausal women, the selective estrogen receptor modulator raloxifene reduces pain and fatigue.6

Tricyclic antidepressants are effective for many patients with fibromyalgia. Amitriptyline and cyclobenzaprine are the 2 most studied tricyclic agents, resulting in comparable outcomes.13 Serotonin reuptake inhibitors and dual serotoninnorepinephrine reuptake inhibitors have moderate evidence supporting their utility.17,18 Before FDA agents for fibromyalgia were approved, practitioners typically used a combination of antidepressants, anti-anxiety agents, muscle relaxants, pain medications, and sleep medicines. The Table 19 lists the FDA-approved agents for fibromyalgia.

Low-intensity exercises, such as walking, improve functioning without exacerbating symptoms.20 For those finding exercise difficult or painful, a recommended alternative is water aerobics, with studies reporting decreased pain, anxiety, and depression, and overall improvement in functioning compared with controls.21

Studies examining complementary and alternative interventions report mixed results, but providers generally do not discourage the 90% of patients who turn to these approaches. Acupuncture, biofeedback, chiropractic care, hypnosis, tai chi, massage therapy, and herbal and vitamin supplements are especially popular.22 Vitamin supplements may be beneficial; vitamin D deficiency, which can exacerbate symptoms, is common in patients with fibromyalgia.4

The lead author of the ACR 1990 guidelines, Frederick Wolfe, MD, is now a leading skeptic. He and others focus on 2 facts, which they believe refute the legitimacy of fibromyalgia: symptoms overlap with symptoms associated with other chronic diseases, and the extreme variability in onset, symptom constellation, and treatment response in fibromyalgia suggests the pathogenesis is both physical and psychological. As a result, a new nomenclature, central sensitivity syndrome (CSS), has been proposed for fibromyalgia. Advocates for changing this label emphasize that CSS is more descriptive.7

Pharmacists may be drawn into this debate by patients who hear comments like, “It’s all in your head.” Pharmacists need not take sides, but they should point out that studies definitely confirm heightened pain sensitivity in fibromyalgia patients, and that the pain is real.

Fibromyalgia is a chronic illness characterized by persistent pain and fatigue, with few remissions.22 Regardless of the controversy surrounding the diagnosis, challenges persist in treating this painful disorder. A multidisciplinary approach is mandatory for a condition with many seemingly unrelated symptoms. PT

13. Clauw D. Fibromyalgia: correcting the misconceptions: not a “phantom illness” but a real condition that can have devastating effects. J Musculoskel Med. 2003;20:467-472.

22. National Center for Complementary and Alternative Medicine. Fibromyalgia and CAM: at a glance. http://nccam.nih.gov/health/pain/fibromyalgia.htm. Accessed August 11, 2010.