Experts in the field of CAD/PAD management provide personal insight into interchanging anticoagulants and minimizing confusion of the different DOACs at 2.5-mg strength.

Paul Dobesh, PharmD: Jay, my next question is something that has to do with more mechanics, almost of how we manage anticoagulation in our institutions. How are you seeing people interchange agents, especially in our focus here of looking at direct oral anticoagulants [DOACs]—the interchangeability of these drugs? And then, kind of taking the question a step further, you now have a rivaroxaban 2.5-mg dose. What are you guys doing to try to minimize confusion that that might cause, because that’s much lower than what we use in any other setting, and this is the only area that we use that in? So, how are you guys wrapping your heads around that issue and making sure that the right patient gets the right drug at the right dose?

James Groce III, PharmD: That’s a great question, Paul. I think to address your first direct question—are we seeing interchangeability among the agents?—we’re not seeing any effort or concerted effort to interchange the different DOACs, and I think, of course, we’re probably both having flashbacks to the mid to late 1980s regarding low-molecular-weight heparins, in which this was just something that was routinely done or within different health care systems. The good news is, I’ve seen no such effort for that happening, certainly, here within the Cone Health System from a formulary perspective. It does bring up some other things that, again, for pharmacists, it’s certainly within the acute care setting, as well as the transitions of care, and I think we have some examples that we’re both going to talk about there. But even for our community pharmacy colleagues, it goes back to again looking at what is the appropriate dose of the appropriate drug at the appropriate interval for that patient.

As a part of the order verification process here, I’m ensuring that the right agent is used for the right patient, for the right indication, for the right dosing interval, etc. We still believe that providing order sets is a key component to that. Additionally, I think one of the things that we should have is an IT [information technology] team within pharmacy for each of our, or all of our, respective health care systems in it, very similar to what actually the Joint Commission requires regarding anticoagulant and antithrombotic medications to promote safety among the class to do everything that we can possibly to assure that we’re using the right drug for the right indication at the right dose at the right interval. What I think we can do possibly is by having our IT pharmacist within the build team, within our respective health care systems, for our electronic health record platform, is list or cite the indication as a part of the electronic drop-down sig, if you will, or written instructions for these different agents. In doing so, if the provider were to choose another DOAC that similarly has a 2.5-mg strength twice-a-day indication, what they would not find would be an indication for the role in the setting of CAD [coronary artery disease] and PAD [peripheral artery disease].

So, I think not only should we put that information inside of hospital but also, certainly as we transition patients to the outpatient setting, it should be another question that our pharmacy colleagues in the outpatient setting are similarly asking themselves: “Is this the drug that the provider really intended to be using?” Again, we go back to the simple concept of looking at a problem list, and, hopefully, our colleagues in the outpatient setting have access. If we’re working in an integrated health care system, I know that we would in terms of access to the problem list, to make certain again that we’re using the right DOAC—in fact, the only DOAC that is approved for the indication of CAD and PAD at a 2.5-mg twice daily dose. There’s only 1 that’s FDA approved; that is to say, with evidence from a clinical trial.

So, all of that again comes about by things that we’re doing really here today, and that is educating our colleagues about this, not only in the outpatient setting but also within the inpatient setting. We must make certain that all of the providers recognize again the appropriateness of dose and interval for the specific patient population and the indication for which the drug has been approved.

I know, Paul, you had shared with me an incident that had occurred within your own community, and I think it would be important, perhaps, for you to share that with our audience, as well.

Paul Dobesh, PharmD: Yeah. It’s important because the next thing I was going to ask you is about the consequence of getting this wrong or making an assumption, right? When you have data with one drug and not with another drug and the doses are different, can people be just making these assumptions? Sometimes they do, but the consequence can be very severe. We had a patient who actually was admitted to the hospital for bleeding, and when we go back and we look at what happened here, it was that they had a prescription for rivaroxaban, 2.5 mg to be given twice a day, for their coronary artery disease, peripheral artery disease. The pharmacist wasn’t familiar, hadn’t seen that before, knew that there was apixaban 2.5-mg dose, because that comes as 5 mg twice a day and 2.5 twice a day, and they just assume, “Oh, the physician must have thought—he just wrote for the wrong DOAC. I’m sure that they meant apixaban 2.5 twice a day; rivaroxaban is usually not twice a day, right?” So the pharmacist made some assumptions, and it led to a patient bleeding episode.

You have to realize, you have to think a rivaroxaban 2.5-mg dose is about one-quarter of the 20-mg dose, right? So its role in arterial disease is much different from what it is in venous disease or in atrial fibrillation, where there’s a lot of stasis and things like that. So, the role that this agent is playing at this dose is different. That’s why it’s so low; that’s why it’s split to twice a day. We realize for apixaban to do this, you’d need basically a 1.25-mg dose, right? That would be the same kind of ratio between its typical 5-mg dose. Now, realize there was an apixaban study with 5 mg twice a day, and they stopped it early because of excess bleeding and no efficacy in this area. So it’s not only that rivaroxaban was the only one that has the FDA approval but also that there’s no one else that has data, no one else is even doing the study that’s like this.

So, I think we have to be mindful of dosing out there, and hopefully this discussion we’re having today is able to bring more people aware of this. But there can be, clearly, some adverse consequences. 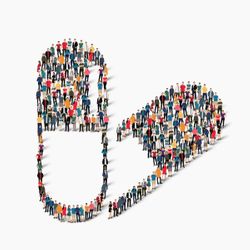