More than a year after the Trump administration’s drug pricing blueprint was released, reform has remained at the forefront of many discussions involving health care legislation.

More than a year after the Trump administration’s drug pricing blueprint was released, reform has remained at the forefront of many discussions involving health care legislation.

In a session held at the 2019 National Association of Specialty Pharmacy Annual Meeting and Expo, Kara Cardinale, MPAff, gave an update on the current status of drug pricing reform and provided an outlook of the legislative landscape.

The blueprint, which was published in May 2018, outlined the administration’s goals to help lower drug prices and reduce out-of-pocket spending for patients. Since then, the blueprint has propelled some regulatory movement, including a pharmacy gag clause ban and proposed actions on drug list prices in direct-to-consumer (DTC) ads, direct-and-indirect remuneration (DIR) fees, and Medicare Part D rebates. More value-based arrangements have also emerged, such as experimental payment models for hepatitis C medications in Louisiana and Washington state. Cardinale also discussed some of the key legislative actions taken over the past year.

The Centers for Medicare and Medicaid Services (CMS) proposed and finalized a rule that requires drug manufacturers to disclose list prices in DTC ads if the cost of a drug is $35 or more for a month’s supply or the usual course of therapy.

The intentions of the rule were to improve consumer transparency and better engage patients in decision making for their treatments. However, several drug manufacturers brought a legal challenge to the rule, with the judge taking their side, according to Cardinale.

“But [the Department of Health and Human Services] recently said it will repeal the ruling, so that’s ongoing right now,” she added.

The administration’s proposed rule on rebate reform would fundamentally restructure the entire program, according to Cardinale. The proposal, aiming to remove safe harbors for drug manufacturer rebates to Part D plans and pharmacy benefit managers (PBMs), would effectively eliminate rebates. However, the proposed rule was withdrawn due to government cost and projected beneficiary premium increases. The Congressional Budget Office (CBO) estimated the cost of the rule at $196 billion over the next decade.

Specialty pharmacies may face significant financial risk due to fees that are collected past the point of sale.

“Since 2015, NASP [National Association of Specialty Pharmacy] members have seen significant growth in the collection of pharmacy fees by PBMs,” Cardinale said.

According to Cardinale, CMS is considering reform but has not finalized any changes to date. In 2018, a CMS-proposed rule solicited comments on moving all pharmacy DIR fees to the point of sale by redefining Part D drug negotiated prices.

However, CMS and CBO assumed high cost projections for the policy, which she said indicates that Part D plans will increase their bids to account for loss of revenue.

“It’s wholly unfair to be accountable to metrics that don’t relate at all to the work you do,” Cardinale said.

At this time, there is no specific provision to move DIR fees to the point of sale, according to Cardinale. She noted that although no pharmacy DIR fee reform is currently included in Senate or House pricing bills, there is considerable bipartisan commitment to address the issue in the Senate.

With respect to drug pricing reform as a whole, Cardinale said the outlook is highly uncertain for legislation on the horizon. She said there is expectation of a single bill based on separate drug pricing bills from the US Senate Committee on Health, Education, Labor and Pensions (HELP) and the Senate Finance Committee.

The key elements of the HELP bill include incentives to spur biosimilar use, access to generic medications, surprise billing, PBM transparency, and elimination of spread pricing.

For the Senate Finance Committee bill, which estimates approximately $100 billion in savings over the next 10 years, provisions focus on inflation penalties in Medicare parts B and D and restructuring the entire Medicare Part D benefit design.

However, Cardinale indicated that in order for drug pricing legislation to pass, it will be necessary to the reconcile differences in the Senate and House bills. “Even if it doesn’t happen this year, it will be an ongoing issue, because drugs are a significant and growing portion of the federal budget,” she concluded. 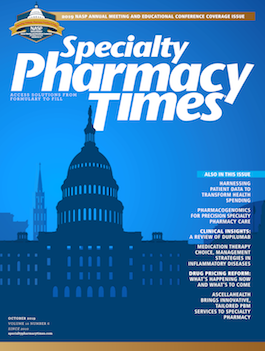