Chronic obstructive pulmonary disease (COPD) is the fourth leading cause of death in the United States. Pharmacists should familiarize themselves with the symptoms, stages, and treatments for COPD.

Chronic obstructive pulmonary disease (COPD) is the fourth leading cause of death in the United States. Pharmacists should familiarize themselves with the symptoms, stages, and treatments for COPD.

Chronic obstructive pulmonary disease (COPD) is a slowly progressive inflammatory respiratory condition that causes limitation of airflow, which is largely irreversible, and breathing-related issues.1-3 COPD refers to a group of diseases that includes emphysema, chronic bronchitis, and, in some cases, asthma.3

Currently, COPD is the fourth leading cause of death and one of the leading causes of disability in the United States; however, statistics from the National Heart, Lung, and Blood Institute estimate it will likely be the third leading cause of death by 2020.1,3-5 According to statistics from the United States National Institutes of Health, an estimated 12 million adults have COPD and another 12 million are undiagnosed or are developing COPD.4,5

The number of deaths attributed to COPD has increased more than 60% over the past 2 decades, and more than 95% of all COPD-related deaths occur in individuals older than age 55. COPD affects men more often than women, but both sexes die from COPD at about equal rates.4,5 According to statistics from the World Health Organization, an estimated 210 million people worldwide have COPD. In 2005, more than 3 million individuals died of COPD, which represents 5% of all deaths worldwide that year.6

Although COPD occurs more often in men, an increase has been noted among women due to the increase in smoking among women.7-9 Annually in the United States, COPD accounts for more than 13.4 million physician office visits and an estimated 634,000 hospitalizations. 8-10 Despite the grim statistics, COPD is a preventable and treatable condition, especially if diagnosed in its early stages, and many patients with COPD can lead productive and active lives if they adhere to their treatment regimens and take an active role in their care plan.

In the United States, tobacco use is the most common cause of COPD, accounting for an estimated 80% to 90% of COPD cases.5,7,9 Other causes of COPD include asthma, exposure to air pollutants at work and home, and history of frequent lower respiratory infections during childhood.3,7,10,11 Some individuals with a genetic disorder called alpha1-antitrypsin deficiency may develop COPD.3,7,10,11 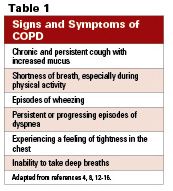 In some cases, COPD is not diagnosed until it is in its advanced stages because many individuals are unaware of the early warning signs10-12 (see Table 1). Patients with COPD may exhibit a mild cough that usually occurs when the individual awakes in the morning. The cough produces clear sputum at or around the age of 45 years; however, the majority of patients begin to exhibit symptoms between ages 50 and 70.8,10,12 Some individuals may experience shortness of breath, episodes of constant coughing also referred to as a “smoker’s cough,” wheezing, or have difficulty in taking a deep breath.12-16 Patients can be easily diagnosed using the spirometry breathing test. According to the American Lung Association, only 21% to 35% of primary care physicians order spirometry for symptomatic smokers.13

The Global Initiative for Chronic Obstructive Lung Disease (GOLD) has developed stages of COPD that are based on the value of forced expiratory volume in 1 second (FEV1) percent predicted7,17(see Table 2). 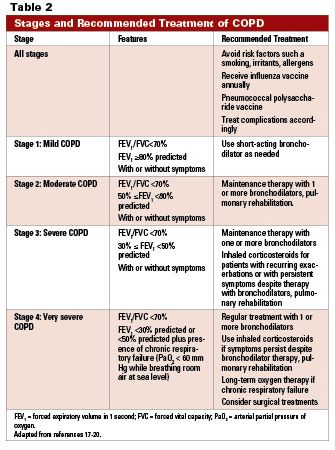 Although no cure exists for COPD, various treatments are available. Lifestyle modifications can manage and slow the progression of COPD, possibly improving the patient’s overall quality of life. Treatment of COPD may include the use of pharmacologic agents, oxygen therapy, pulmonary rehabilitation, and surgery. Selection of treatment is based on the patient’s symptoms and the severity of the COPD. In general, the goals for treatment include slowing the progression of the disease, preventing and treating complications, providing relief of symptoms, preventing COPD exacerbations or flare-ups, and improving a patient’s overall health.7,17-19 To successfully manage COPD, patient education and encouraging the patient to take an active role in their treatment are critical.

Smoking cessation is the foremost important step in the prevention, treatment, and management of COPD and may pose a challenge for some patients. Studies show that smoking cessation can reduce the risk of developing COPD, reduce the accelerated decline in pulmonary function, and can improve COPD symptoms in patients.19 Studies report that symptoms of cough and excess mucus production can be reduced significantly within a few months of smoking cessation.19 A successful smoking cessation program typically uses various resources, such as patient education, setting a date to quit, providing a support system, and adjuncts to pharmacotherapy such as nicotine replacement products or the agent varenicline.7,6,19

Pharmacologic agents often employed in the treatment and management of COPD include beta2 adrenoceptor agonists, anticholinergics, oxygen, methylxanthines, inhaled steroids, and antibiotics7,17,20,21 (see Table 3). Bronchodilators are considered the mainstay of COPD therapy for both acute exacerbations and acute treatment.7,17,20,21 Inhaled drugs are preferred over oral agents because of their faster onset of action, greater effectiveness, and lower risk of side effects.22 The choice of a beta2 agonist or an anticholinergic agent depends on availability, as well as the symptom relief and adverse effects experienced by the individual patient.17,20,21 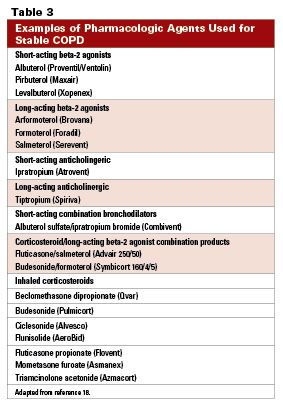 Available bronchodilators include short- and long-acting beta2 agonists and short- and long-acting anticholinergic agents.22 These agents are available as a single entity or in combination with a corticosteroid.22 Studies report that combinations of bronchodilators may improve efficacy and reduce risk of adverse effects when compared with increasing the dose of a monotherapy. 21,23,24 Short-acting bronchodilators are often used for those with intermittent or mild COPD symptoms.21,23 Long-acting bronchodilators are often indicated for moderate-to-severe COPD, and inhaled corticosteroids are indicated for patients with moderate-to-severe COPD who experience frequent exacerbations.17,20,21,23-25

The pneumococcal vaccine and yearly influenza vaccine are recommended for all patients with COPD, because they are at greater risk for developing these infections.1

At the 2010 annual meeting of the American Academy of Allergy, Asthma & Immunology, it was reported that COPD patients treated with formoterolcontaining agents appear to significantly reverse airflow obstruction, even in severe cases of COPD.27

Results from a study published in the January 2010 issue of Chest report that patients taking tiotropium bromide for COPD appear to have a reduced risk of death and cardiovascular events.28

In December 2009, Boehringer Ingelheim Pharmaceuticals Inc and Pfizer Inc announced that the FDA approved Spiriva HandiHaler (tiotropium bromide inhalation powder) for the reduction of COPD exacerbations. The product was already FDA-approved as a once-daily maintenance treatment for breathing problems associated with COPD.29

Results from a study published in the August 2009 issue of Pharmacotherapy report that the use of combination inhaled corticosteroid and long-acting beta2 agonist therapy was associated with the greatest positive effects on outcomes in those with COPD.30

In February 2009, the FDA approved Symbicort (budesonide/formoterol fumarate dihydrate) 160/4.5 mcg for the twice-daily maintenance treatment of airflow obstruction in patients with COPD.31

For the majority of patients living with COPD, management is not always easy. In patients with known COPD, exacerbations occur an average of 1.3 times per year.26 Exacerbations range in severity from mild to severe and can sometimes result in death.26,28 An exacerbation can cause an increase in production of mucus, cough, and shortness of breath.32 Other symptoms associated with exacerbations may include infections, fever, insomnia, and fatigue.32

Patients should be reminded that smoking cessation, immunization against influenza and pneumonia, and pulmonary rehabilitation have been shown to improve function and reduce subsequent COPD exacerbations.25,26

Patients should be encouraged to seek support when warranted. Results from a study published in the February 2010 issue of Chest reported that COPD patients experience high rates of depression, especially those with severe COPD.33

Through patient education and quality care, patients can learn to live with COPD. Pharmacists can be instrumental in increasing awareness about COPD and inform patients who smoke about smoking cessation options to prevent COPD or keep it from worsening. Pharmacists can also provide patients with information about the various pharmacologic treatment options available for COPD, remind patients about the importance of adhering to therapy, and ensure that patients are educated on the proper use of inhalation therapy devices and any other prescribed drug therapy. Patients who are current or former smokers, especially those exhibiting signs of COPD, should be encouraged to get tested. â– 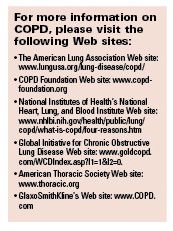 . The role of long-acting bronchodilators in the management of stable COPD. Chest