A new compound was found to delay leukemia in mice while also killing leukemia cells in human tissue samples, which could lead to improved treatments in the future, a recent study indicates.

Dubbed an exciting “new paradigm” by researchers, the compound disables an altered cellular protein that drives a specific form of acute myeloid leukemia. Blocking the protein permits a cancerous cell to determine it has problems, which causes its death, as opposed to continuing to grow and spread.

"This drug that we've developed is ... targeting a class of proteins that hasn't been targeted for drug development very much in the past. It's really a new paradigm, a new approach to try to treat these diseases," researcher John H. Bushweller, PhD, said in a press release. "This class of proteins is very important for determining how much of many other proteins are made, so it's a unique way of changing the way the cell behaves."

The drug, which blocks the cellular machinery taken over by the cancer, is significant due to its specific ability to kill cancerous cells while apparently not harming healthy cells.

"It's what we call a targeted agent. It hits one specific protein," Dr. Bushweller said. "It's not a killer of many other types of cells. As far as we can tell, it only really kills the leukemia cells that have this particular altered protein in them."

Having established efficacy in a mouse model and in human tissue samples, the drug must still be further developed for use in clinical trials.

The drug subsequently does not show the toxicity and side effects that come with traditional chemotherapy drugs for the treatment of acute myeloid leukemia. 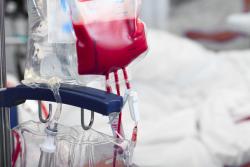