Biopharmaceuticals: A Way Forward for Biogenerics?

Although the demand for generic competition in the biopharmaceutical market could potentially be great, regulators have been slow to clear a pathway for the approval of generic biopharmaceuticals.

Although the demand for generic competition in the biopharmaceutical market could potentially be great, regulators have been slow to clear a pathway for the approval of generic biopharmaceuticals.

When pharmaceutical products contain active ingredients that are biological in nature and are manufactured using live organisms, such as either standard or specialized bacterial or animal cell lines, we call them biopharmaceuticals.1 Collectively, the technology used to produce these drugs is called biotechnology.1 Biotechnology is a new science that still lacks adequately developed supporting laws about generic competition; consequently, the field is afloat with controversy. Even emerging language that describes this field is new and confusing to many pharmacists. The Table contains some explanations for common and technical biotechnology and biopharmaceutical terms. Pharmacists need to understand these terms to communicate with their patients about the biogenerics controversy.

Some familiar biopharmaceuticals widely used in the United States include epoetin alfa (Epogen and Procrit), filgrastim (Neupogen), and 50% human insulin isophane suspension and 50% human insulin of recombinant DNA origin (Humulin). In the United States, the biopharmaceuticals market is worth about $8 billion.2 Since 1981, the FDA has approved more than 300 such products for market.3

With a brand market valued at $8 billion, the potential US market for generic biopharmaceuticals is thought to be about $2 billion.2 The US regulatory system currently lacks a mechanism, however, for their approval. The 1984 Waxman-Hatch amendment allows generic manufacturers to submit an abbreviated application showing proof of only bioequivalence, not safety and efficacy. The amendment does not apply, however, to products approved by the FDA’s Center for Biologics Evaluation and Research (CBER), the arm of the agency responsible for approving biopharmaceuticals.2 Many health care stakeholders in the United States are demanding a mechanism for the approval of biogenerics because of increased pressure to contain costs. As of yet, Congress has not approved any related legislation.

What Are the Arguments Against Creating a Regulatory Pathway for Biogenerics?

Most stakeholders in the United States, including public and private insurers, patients, and generic drug manufacturers, would benefit from healthy generic competition in the biopharmaceuticals market. Some groups oppose the development of an approval pathway in the United States, however. Opponents are primarily representatives of biotechnology companies who stand to lose a great deal if generic manufacturers are allowed to profit from their innovations. Their primary argument against biogenerics is that, unlike most smallmolecule drugs, biopharmaceuticals are highly complex molecules whose shape and structure are impossible to fully characterize. This is further complicated by the fact that originator companies rarely publish proprietary information about the specific molecular clone, original cell bank, or exact fermentation and purification processes. This difficulty, they argue, makes it nearly impossible for competitors to develop a drug with identical properties and pharmacologic activity, because the molecules are very sensitive to manufacturing process changes. Failure to replicate the manufacturing process accurately leads to differences that may have serious health implications.

Advocates for biogenerics agree that some complex molecule biopharmaceuticals are difficult to characterize. They say, however, it is also true that most can be adequately described: molecular complexity is a continuum for all pharmaceuticals.4 Plus, this “complexity” argument also applies to any production changes by the innovator company, changes that are currently acceptable within the regulatory framework of “comparability” (see Table).

Generic biotechnology companies, they argue, have the capacity to develop similar, although not identical, approaches to producing the same product. For example, human growth hormone is produced by 5 manufacturers in Europe, where regulators created a mechanism for biogenerics approvals in 2005.4 Two of the manufacturers use standard Escherichia coli; 2 use specialized E coli strains; and 1uses a transformed mouse cell line to express the product.2 Despite these different manufacturing processes, all produce a 191-amino acid sequence that is identical to human pituitary growth hormone.

The demand for generic competition in the biopharmaceuticals market is potentially great. In the United States, regulators have been slow to adopt legislation enabling generic manufacturers to create generic versions of these products. The European Union has created a special adaptive approval procedure for “similar biological medicinal products,” biosimilars, or biogenerics. â–

Dr. LaFleur is an assistant professor at the University of Utah College of Pharmacy Pharmacotherapy Outcomes Research Center and an investigator in the Salt Lake City Veterans Affairs Informatics, Decision Enhancement, and Surveillance (IDEAS) Center. 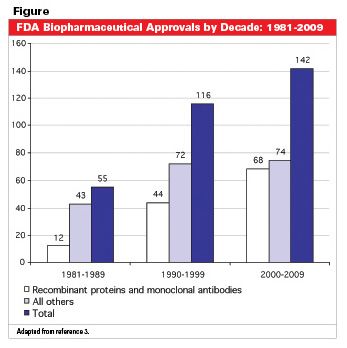 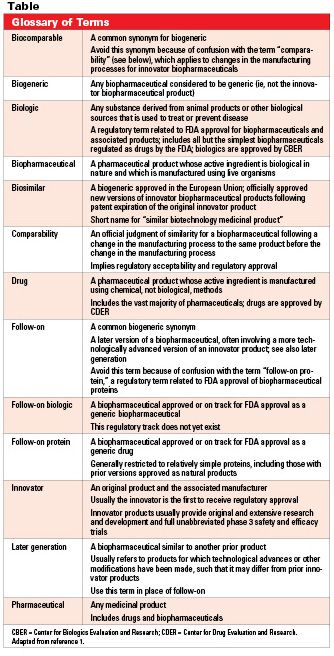 3. Rader RA. FDA FDA Biopharmaceutical Product Approvals and Trends: Significantly More Approvals Were Granted in 2009, Editorial and Listings from 2002-Present: Based on 'Biopharmaceutical products in the US and European Markets.' Available online