AbbVie alleges that Amgen is infringing on 61 patents with their biosimilar.

AbbVie recently filed a lawsuit alleging the Amgen’s biosimilar version of Humira infringes on multiple patents, and should be kept off the market if it receives FDA approval.

AbbVie has been working tirelessly to delay a Humira biosimilar from entering the market, the report noted. Thus far, they created more than 70 new patents for Humira, since its main patent expires this year.

The company alleges that Amgen is infringing on 61 Humira patents, but they are only including 10 in the lawsuit, according to the Journal. Humira generated $2.712 billion in revenue just during the second quarter of this year.

The drug has brought in $4.907 billion for the first and second quarters of the year, while Imbruvica, the second highest selling product, only brought in $709 million in revenue during this time. It is clear why a potentially less costly biosimilar version of the top selling product would result in delay tactics from AbbVie.

Although Amgen’s biosimilar has not received FDA approval, a panel of experts have recommended approval to the FDA. A likely reason for the lawsuit is because the biosimilar cannot be launched until legal issues are resolved, according to the Journal.

Even if the drug does receive FDA approval, AbbVie could file additional patent-infringement suits to delay its launch even further. With Humira generating a substantial among of revenue, AbbVie has a lot to lose with a biosimilar on the market. 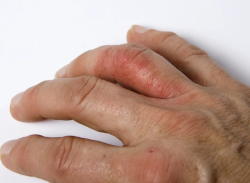