The risks surrounding the handling and manipulation of HDs have been recognized since the late 1970s, with more than 17 guidelines for HDs published over more than 30 years by 6 organizations and government agencies. However, despite the meticulous attention focused on drug safety, HD handling regulations continue to change.1-7

Although the US Pharmacopeial Convention (USP) addressed HDs in a 2008 update to USP <797> for the issue of compounding sterile parenteral HDs, the update fell short due to a lack of guidance for nonparenteral products. As a result, in March 2014, USP published a proposed set of guidance known as USP <800> that dealt with HD handling in health care settings.

Enforceability and Key Changes
Due to provisions of USP numbered below 1000 being legally enforceable, following the adoption of these rules by individual state boards, USP <800> may subject pharmacies to both state board and FDA inspections.

Like USP <797> and USP <795>, the provisions of proposed USP <800> deal with product transport, product storage, compounding, preparation, and administration of parenteral products. However, USP <800> builds on earlier regulations by focusing on HDs and occupational safety.

The regulations require HD storage and preparation in areas separate from non-HDs and will eliminate the practice of compounding small volumes of HDs in areas where non-HDs are routinely prepared, which is allowed under USP <797>.

In another important change, USP <800> requires the administration of HDs with the use of closed-system transfer devices (CSTDs) to minimize HD exposure to nurses who administer these drugs to patients.5,7-9

The new requirements in USP <800> may pose major implementation challenges for pharmacists and pharmacy managers, as certain provisions may require pharmacies to change workflow patterns and make major purchasing decisions. In addition, limited financial resources may pose an important challenge to implementation of USP <800> regulations.

It is important to be familiar with the provisions of these proposed regulations and to take early steps to reduce implementation difficulties later on.8

USP <797>: Adoption of and Compliance With Existing Regulations
Although compliance with USP <797> has improved over time, current legislation governing sterile product compounding is a patchwork of state-specific regulations with wide variations between jurisdictions.

Despite the fact that USP <797> is a legally enforceable standard irrespective of state-specific legislation, only about half of state regulations specifically reference USP <797> in sterile compounding rules.4,8

In a nationwide survey conducted in 2014, two-thirds of respondents from 719 pharmacies throughout the United States and Canada reported handling HDs. Several reasons were cited by respondents for a lack of full USP <797> compliance (Figure 1). 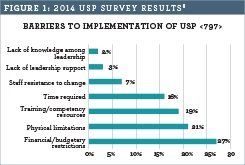 State pharmacy boards, including the state boards of California, Florida, Minnesota, and Texas, have conducted inspections ensuring compliance with USP <797> standards in hospitals. Partially as a result of this increased regulatory oversight, between 2011 and 2014, self-reported compliance rates with USP <797> increased from 73.9% to 81.3% for sterile products and from 71.3% to 75.4% for hazardous drugs (Figure 2).8 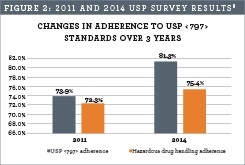 Because Class I BSCs and CVEs prevent the escape of HDs but do not guarantee product sterility, these cannot be used for preparation of sterile HDs. USP <800> continues to allow Class II BSCs and CACIs to be used for nonsterile compounding.

In addition to the costs for building a negative-pressure environment, pharmacies may need to purchase additional primary engineering controls (eg, BSCs, CACIs, and CVEs) to use in negative-pressure rooms dedicated to HD preparation.

Under USP <797>, pharmacies could prepare HDs using the same BSCs or CACIs used for non-HDs (provided the volume of HD prescriptions was not very high). This provision is often referred to as the, “low-volume exception.”

With the implementation of USP <800>, however, this exception will be eliminated.7,8

It is unlikely that pharmacies will simply discontinue compounding HDs, as the scope and range of products considered HDs has expanded considerably beyond antineoplastic drugs through HD definitions set by the National Institute for Occupational Safety and Health (NIOSH).7,8,11

HDs as Defined by NIOSH
USP <800> uses a broad definition of HDs set by NIOSH that include drugs in any of 6 categories: carcinogenic drugs, teratogenic drugs, reproductive toxins, drugs with organ toxicity at low doses, genotoxic drugs, or new drugs that mimic existing HDs.

This list may be useful as a starting place in distinguishing between HDs and non-HDs. However, each institution will need to develop its own individual list.

Reviewing the current list and demarcating HDs from non-HDs is a useful first step in preparing for USP <800>. Importantly, USP <800> regulations mandate reviewing the HD list (and documenting the review process) at least once each year.7,11

Additionally, USP <800> requires storage of all HDs in a separate refrigerator from non-HDs, with the HD refrigerator kept in a negative-pressure room with at least 12 air changes per hour. These regulations may require pharmacies to build additional storage areas and purchase additional refrigerators.7,8

Handling HDs and Supplemental Engineering Controls
For many HDs, exposure can occur not only during the receipt, transport, storage, compounding, and dispensing of medications (typically handled by pharmacy staff), but also via activities managed by nurses.

These nursing activities include exposure during the administration of hazardous parenteral medications and contact with the bodily fluids of patients taking HDs in the course of patient care activities.7,8

Supplemental engineering controls, such as CSTDs, have an important role in protecting health care workers from occupational exposure to HDs. Once connected to the reservoir, such as a drug vial, CSTD devices equalize the pressure gradient between the vessel containing the drug and the syringe.

Without a pressure equalization system, differences in pressure can generate fine aerosols. These aerosols may escape into the air and expose the environment, patients, and health care professionals to HDs.

Whereas some CSTDs equalize pressure using a pressure equalization chamber, other CSTDs use an integrated filter to cleanse escaping air contaminated with hazardous drug vapors or aerosols.12,13

Although the use of CSTDs in the pharmacy is recommended during preparation of HDs but not required under USP <800>, the regulations require nurses to use a CSTD when administering HDs to patients. Although CSTDs can be used by nurses in most cases, some highly reactive alkylating agents (eg, bendamustine) may not be compatible with CSTD materials.

In these rare cases, the USP <800> regulations recognize that a CSTD cannot be used.12-14

Additionally, because hospitals will eventually gain access to CSTDs in nursing units, they may also extend CSTD use to hospital pharmacies.12,13

In 2015, NIOSH published a draft containment protocol for testing which CSTD systems are effective in preventing vapors and liquids from escaping into the surrounding environment.

Although this protocol excludes CSTDs that use air-cleansing systems, it allows vapor containment testing under the NIOSH protocol for most commonly used products on the market, including the BD Phaseal System, Spiros, ChemoLock, VialShield, and Equashield/Equashield II.

Of these, only the BD Phaseal System and Equashield/Equashield II have the preferential characteristic of a double-membrane connector. Other differences between products should be discussed with company representatives.13

In terms of efficacy data, published evidence supports the protective efficacy of both the BD PhaSeal System and Equashield/Equashield II.

For example: Final Thoughts
Although USP <800> introduces multiple new requirements for pharmacies, this legislation is intended to protect pharmacists, nurses, pharmacy technicians, and others from the potential carcinogenic and teratogenic effects of HDs.

By taking early, proactive steps to implement key areas of USP <800>, pharmacists can minimize the disruptive effects of these new guidelines and make decisions now that will reduce costs later when specialized pharmacy building contractors are inundated with remodeling projects and hospitals are scrambling to choose appropriate supplemental engineering controls. SPT

About the Author
MICHAEL R. PAGE, PHARMD, RPH, earned his PharmD from the Ernest Mario School of Pharmacy at Rutgers University. He has worked as a community pharmacist at CVS Pharmacy and is currently clinical editor in clinical and scientific affairs at Pharmacy Times.