Multidisciplinary and Pharmacy-Based Strategies for Improving Medication Adherence
2015-12-10 19:43:01
Michael R. Page, PharmD, RPh
MEDICATION NONADHERENCE has been documented since ancient times, when Hippocrates wrote, “Keep watch also on the faults of the patients which often make them lie about the taking of things prescribed.”

Today, with an estimated 50% to 66% of patients failing to take medication as prescribed, with 17% of the United States gross domestic product spent on health care, and with 75% of those costs related to chronic condition management medication, nonadherence is a larger problem than ever.1-3

Low adherence rates are the cause of 33% to 69% of medication-related hospitalizations. In patients with hypertension alone, nonadherence is responsible for approximately 86,000 premature deaths in the United States every year. The annual economic costs of medication nonadherence are estimated at $100 billion, and according to statistics from the Network For Excellence In Health Innovation, the cost of avoidable drug-related problems, including nonadherence, costs society approximately $290 billion each year.4-7

The costs of nonadherence rapidly diminish as adherence improves. For instance, in patients with diabetes, each 10% increase in medication possession ratio rates reduces overall health care costs by 9% to 29%.

In fact, for the most adherent patients with diabetes, medical costs are halved versus the least adherent patients ($8867 vs $4570). Similarly, in a 2000 study of a Medicare population with multiple chronic disease states, for each additional prescription filled, hospital-related costs fell by $104 per patient, or approximately 5% overall.8-11

Several methods have been proposed for improving adherence including12,13: For instance, in patients with diabetes, certain erroneous beliefs were associated with less consistent medication use.

These misconceptions about medications include statements like14: Ultimately, education is the key to improving adherence. For managed care plans, investing in medication adherence initiatives is a winning proposition.

It has been estimated that for every dollar spent on medication adherence initiatives for patients with diabetes, $7 in health care costs are saved (Figure 1). 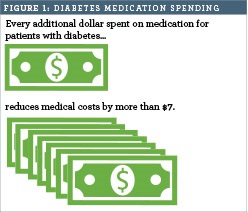 By some estimates, improved adherence in patients with diabetes alone could save $8.3 billion per year.8-11

For instance: Pharmacists use a variety of methods to promote adherence. In a 2011 survey of pharmacy managers at 162 health care organizations, interventions for improving adherence included individual coaching, medication reconciliation, MTM, telephonic reminders, postdischarge calls, and home visits, among others (Figure 2).19

As the pharmacy profession continues to evolve, pharmacists will become an increasingly important part of the move toward improving adherence by reducing regimen complexity for patients, correcting misconceptions, and ensuring that patients understand the benefits and risks of therapy.21 SPT

MICHAEL R. PAGE, PHARMD, RPH, earned his PharmD from the Ernest Mario School of Pharmacy at Rutgers University. He has worked as a community pharmacist at CVS Pharmacy and is currently clinical editor in clinical and scientific affairs at Pharmacy Times.