The Pharmacist's Value in Pharmacogenetic Testing for Mental Health
2019-08-20 13:00:00
Pharmacy involvement in pharmacogenetics was not widely accepted when testing was first introduced. Some of the resistance may be attributed to the public perception of pharmacists in services beyond dispensing and the pharmacists’ own discomfort in offering these tests. Researchers assessing the perception of the pharmacist’s role have concluded that many patients are unaware of how pharmacists can be involved in direct patient care services.1

Similarly, patients and health care providers may have limited knowledge regarding the benefits of pharmacogenetic testing. Numerous patients seek to find their ancestry history and risk of certain health conditions through direct-to-consumer genetic reports, but this rise in uptake has not been observed for pharmacogenetic testing. Clinical adoption of testing has also moved slowly, creating a barrier to educating both providers and patients on the value of both pharmacogenetics and the pharmacist’s role.

As medication experts, pharmacists can use their knowledge regarding drug-drug interactions to help providers select more appropriate medications for patients right from the start. Pharmacogenetic information gives pharmacists another tool for recommending ways to optimize drug regimens. Proper use of this information can help identify individuals who may not benefit from certain medications or may be at greater risk of adverse events and thus prevent these situations. Adverse drug events account for 1.3 million emergency department visits per year in the United States, contributing to hospitalizations and health care expenditures.2

Some pharmacists attribute the cost of pharmacogenetic testing as a barrier to uptake, but interestingly, the cost of currently available tests varies widely.3 Additionally, the number of genes included differs among pharmacogenetic panels. For example, some panels target genes relevant to certain disease states, such as mental health. The value of pharmacogenetics can be appreciated when selecting antidepressants. With antidepressants taking several weeks to produce the intended effect, patients undergoing treatment with standard trial-and-error prescribing may fail several therapies before finding an effective agent. Pharmacogenetic information can help prescribers select more appropriate agents for treating depression, and testing may soon reach a price point that is more reasonable for the general public. That said, routine adoption of testing requires evidence that it can be cost-effective.

Pharmacogenetic testing also has proven clinical value in the setting of mental health. The Clinical Pharmacogenetics Implementation Consortium guidelines for 2019, the gold standard for pharmacogenetic guidelines, include recommendations and actionable information for many medications used in the mental health setting.6 The most relevant genes affecting these medications include CYP2C19 and CYP2D6, and the associated guidelines can be observed in table 2.6 The guidelines include background on the genes, information on genetic interpretation of the tests, background on the drugs and therapeutic recommendations. These recommendations are specific to metabolizer status and will help determine whether medications are appropriate or if they should be dose adjusted or avoided. For example, the guidelines recommend that tricyclic antidepressants be avoided in CYP2D6 ultra-rapid metabolizers due to a potential lack of efficacy compared with normal metabolizers.7 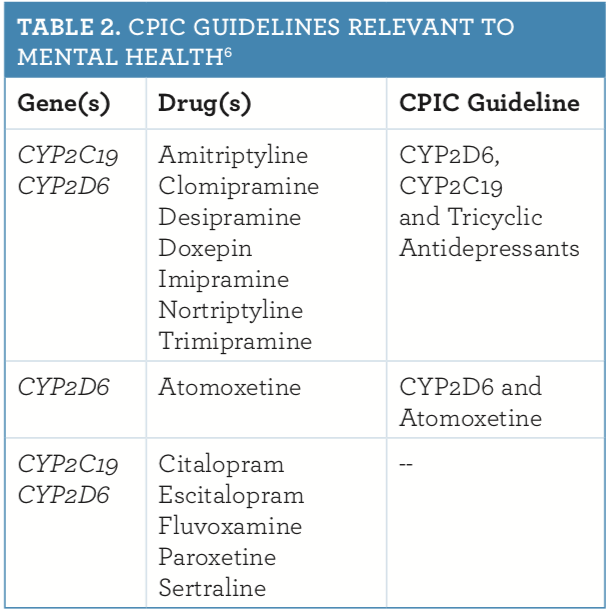 As their role has expanded to include clinical consultations, pharmacists can help identify and educate patients who might benefit from pharmacogenetic testing. By assisting in selecting patients and helping providers through medication recommendations, pharmacists can have a profound impact on patients. Additionally, potential exists to effect both clinical and cost outcomes for the health care system through pharmacogenetic testing. With the United States spending more on health care than most other countries, it is increasingly important to focus on cost-saving measures. Pharmacogenetic testing serves as a valuable tool for pharmacists and providers seeking to optimize drug regimens and improve the patient experience. The overall outcome for patients is greater treatment efficacy, fewer adverse events and drug interactions, and improved medication adherence.
Amina Abubakar, PharmD, is a board-certified HIV pharmacist who graduated from the Philadelphia College of Pharmacy. Her passion is to bring innovation to clinical practices in order to thrive in a pay-for-performance environment. She is the CEO of Rx Clinic Pharmacy and founder of the Avant Institute, where she shares her methods for expanding enhanced clinical services within the community pharmacy and collaborative settings.

Jessica Sinclair, PharmD, graduated from the Purdue University College of Pharmacy. She completed her post-graduate training as a resident of the University of North Carolina PGY1 Community-Based Pharmacy Residency with Rx Clinic Pharmacy in Charlotte. She now works as a clinical pharmacist with Rx Clinic Pharmacy and serves as an instructor for the Avant Institute, where she provides insight to pharmacists interested in expanding clinical services and collaborating with providers.
References
39065
The Pharmacist's Value in Pharmacogenetic Testing for Mental Health
As medication experts, pharmacists can use their knowledge regarding drug-drug interactions to help providers select more appropriate medications for patients right from the start.
/publications/issue/2019/August2019/the-pharmacists-value-in-pharmacogenetic-testing-for-mental-health