Migraines: Finding Relief
2015-02-17 04:01:01
Yvette C. Terrie, BSPharm, RPh
Everyone gets a headache now and then, but migraine headaches are characterized by recurring attacks of moderate to severe headache pain. Often called migraines, these headaches are a common neurologic condition that can negatively affect an individual’s quality of life.

If you suffer from migraines, you are not alone. According to the National Headache Foundation and the American Migraine Study, more than 37 million individuals in the United States are affected by migraines, making them the second-most common type of headache. Migraines are most common among individuals aged 25 to 50 years, and migraines are 3 times more common in females than in males.

Migraines typically start in childhood and may get better or worse as an affected individual ages. Research from the National Headache Foundation has shown that migraines tend to run in some families and that 70% to 80% of migraine sufferers have a family history of migraines.

Signs and Symptoms
Migraines may last 4 to 72 hours and can disrupt your life. Some individuals who get migraines experience warning symptoms, known as an aura, before the onset of the migraine. An aura involves a group of symptoms including vision changes. The most common symptom associated with migraines is a throbbing pain on 1 side of the head. 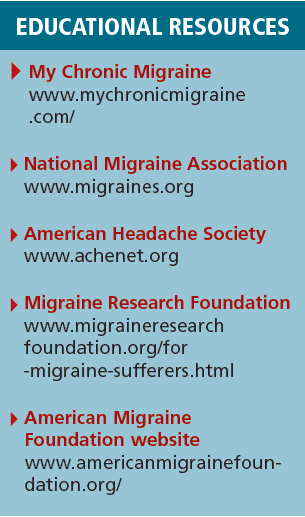 Diagnosis
There is no single test for diagnosing migraines. If you suspect you are having a migraine, your doctor will review your medical history and symptoms as well as conduct complete physical and neurologic exams. Other medical tests, such as computed tomography (CT) or magnetic resonance imaging (MRI), may be ordered to rule out other medical conditions.

Treatment
The medications used for managing migraines are typically classified as preventive or pain-relieving medications. Treatment is determined by the frequency and severity of your migraines, the cause of your migraines, your other medical conditions, and your allergy history. Your pharmacist will explain how to take your medication. Some medications are taken daily, while others are taken at the onset of a migraine. In addition, several OTC products are marketed for the treatment of mild to moderate migraines. These products contain analgesics such as acetaminophen (APAP), ibuprofen, and aspirin (ASA), as well as caffeine.

It is important to note that self-treatment of migraines is only recommended after a diagnosis has been confirmed. To prevent drug interactions, contraindications, or adverse reactions, it is important to discuss the use of these products with your doctor or pharmacist beforehand.

Some patients with migraines may find relief by using alternative remedies such as biofeedback, acupuncture, relaxation techniques, and nutritional supplements.

Management and Prevention
The best way to prevent migraines is to take your medication at the first sign of a migraine or before being exposed to a known trigger. Keeping a headache diary may help you identify possible triggers. Lifestyle modifications may reduce the frequency and severity of migraines; modifications include avoiding known triggers, exercising regularly, taking medication as directed, and not skipping meals.

You can ease the pain and discomfort associated with migraines by:
• Getting sufficient sleep
• Keeping a headache diary to determine your headache triggers
• Resting and relaxing when possible, and reducing stress

Conclusion
Migraine pain can be unbearable, so it is important for you to take your medication as directed and to seek immediate medical care if you do not obtain relief or if your migraine worsens. If you are taking any other medications, have other medical conditions, or are pregnant or breast-feeding, you should never take any medication until you have consulted your primary health care provider.


Ms. Terrie is a clinical pharmacist and medical writer based in Haymarket, Virginia.


14370
Migraines: Finding Relief
If you suffer from migraines, you are not alone.
/publications/issue/2015/February2015/Migraines-Finding-Relief