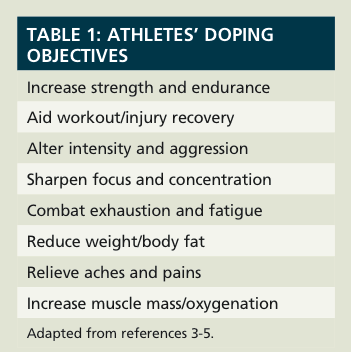 Sponsors and fans routinely spend millions of dollars on sports and the hoopla that surrounds it—advertising, parties, and items that carry a favorite team’s brand. Winning athletes are rewarded with recognition, scholarships, and lucrative contracts; second place is often considered “first loser.”6 Coaches’ jobs depend on a team’s success.7-9 Consequently, athletes and coaches will risk a great deal to obtain a competitive edge and enhance performance.

How much will they risk? Sports Illustrated interviewed a cohort of elite Olympic athletes, asking, “If you were given a performance-enhancing substance, you would not be caught, and you would win, would you take it?”

Ninety-eight percent of athletes answered yes. When they changed the question to, “If you were given a performance-enhancing substance, and you would not be caught, win all competitions for 5 years, then die, would you take it?” More than 50% still said yes.10,11

Doping is controversial mainly because the medical community has not defined where restoration of normative function ends and performance enhancement begins. Those opposed to doping contend that it undermines the traditional principle of a level playing field and creates unnecessary health risks. Supporters maintain that medical practitioners’ concerns about long-term health effects are unwarranted and that athletes who are informed about possible adverse effects should be able to make an informed decision.5,12

Antidoping programs rely on testing, The ability to detect drug misuse is limited: many athletes know the pharmacokinetics and pharmacology of the drugs they take better than a third-year pharmacy student does. They time their doses and use masking agents to circumvent detection.12

Doping is not limited to professional sports. Increasingly, public health officials are concerned that amateur and recreational athletes are also doping.4,16,17 Some of these athletes are children.1,16,18 Ironically, male college athletes who use PESs are also more likely to use social/recreational drugs, despite personal and anecdotal evidence clearly showing their negative effects on athletic performance.19 And like professional athletes, they are likely to engage in “stacking,” the sports world’s word for polypharmacy with PESs.20

Increasing oxygen delivery to active muscles—especially by increasing the number of red blood cells—is the most effective way to increase aerobic performance.3 For this reason, blood doping and using erythropoietin products are common among cyclists and other endurance athletes. Online Table 2 describes the drugs and techniques that athletes use illicitly most often. Anabolic steroids are the most commonly abused substances, and many athletes receive dosing recommendations from coaches, other athletes, online discussion groups, and Internet vendors.5 Some receive the drugs without their knowledge or consent; coaches may give athletes supplements without revealing that they contain drugs.21 Many websites imply that steroids are safe, often claiming that unskilled physicians, biased researchers, and government bureaucrats inflate their dangers.5

PESs have many harmful consequences that many athletes experience. Pharmacists must keep in mind that athletes may use these drugs at doses well beyond those used in therapeutic settings. Some serious consequences can result, including irreversible androgenic/anabolic effects, toxic hepatitis, withdrawal, dependence, body dysmorphic disorders, depression, aggression, the unmasking or acceleration of cancer growth, diabetes mellitus, dyslipidemias, cardiomyopathy, and nephrotoxicity. Steroids are associated with recurrent hepatitis, cholestasis, hemorrhage, or hepatoma in some individuals. Additionally, products obtained from illicit sources may contain toxic contaminants.20

Health care professionals need to fully understand the complexity of PESs (eg, their physiologic and psychotropic properties, individual characteristics, different drugs and doses), acknowledging that each athlete’s biology is unique. Pharmacists should be aware that Internet information can strongly influence vulnerable athletes’ decisions. PESs offer temporary glory or improved appearance, but their long-term effects are considerable and dangerous.

Ms. Wick is a visiting professor at the University of Connecticut School of Pharmacy with interests in medical history and how society views and addresses issues related to prescription drugs.
References
11329
Performance-Enhancing Drugs: A New Reality in Sports?
Doping violates the spirit of sports and is dangerous.
/publications/issue/2014/March2014/Performance-Enhancing-Drugs-A-New-Reality-in-Sports