Crohn’s disease belongs to a group of conditions called inflammatory bowel disease. Approximately 700,000 Americans have Crohn’s disease. Crohn’s disease is a life-long disease. Its main symptom is inflammation. When tissue is inflamed, it turns red and is swollen and painful. Inflamed tissue cannot perform its normal function. Crohn’s disease can affect any part of the digestive system. The disease can occur anywhere from the mouth to the anus. Most cases affect the end of the small intestine and the beginning of the colon. Stomach pain and diarrhea are the main symptoms. Some people have diarrhea up to 20 times a day. Rectal bleeding is another symptom. Other symptoms include the urgent need to move your bowels. Some patients have the feeling of an incomplete bowel movement.1

Your doctor will perform one or more tests to determine whether you are suffering from Crohn’s disease. Colonoscopy is the most common test. This test is used to look inside your rectum, colon, and part of the small intestine. A tissue sample will be taken. This will help to determine if you have some other disease. Since bleeding is one of the symptoms, blood tests will be done. This is to find out if bleeding has caused a low blood count. Laboratory tests can also confirm that there is inflammation. 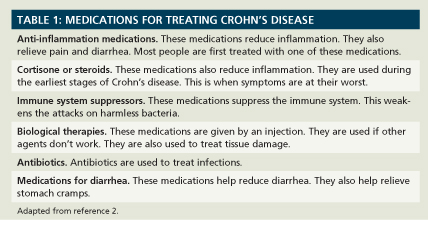 The body’s natural defense system is called the immune system. This system attacks harmful bacteria. Our intestines are full of harmless bacteria. These bacteria help digestion. Researchers believe the immune system attacks these harmless intestinal bacteria. These attacks cause inflammation. There is a genetic link. Crohn’s disease runs in families. There are other factors that trigger attacks. For example, cigarette smoking makes symptoms worse. People with the disease often have their first attack between ages 13 and 30.2

Crohn’s disease is more common in certain groups. For example, people of Eastern European Jewish descent are more likely to get the disease than other groups.

What Are the Treatments?

There is no cure for Crohn’s disease. Without treatment, complications will occur. These include ulcers, blockage of the intestine, low blood count, infection, and tissue damage. Tissue damage includes “tunnels” in the intestine. Ulcers are deep sores in the digestive tissue. 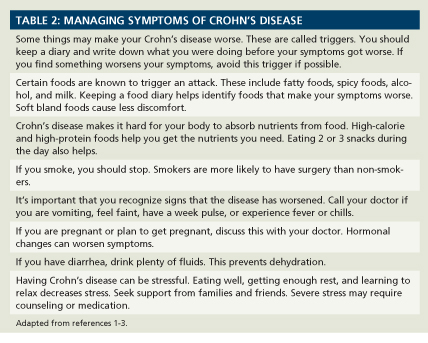 The goal of treatment is to reduce symptoms. These include stomach pain and diarrhea. Another goal of treatment is to reduce inflammation. Treatment may include medication, surgery, and dietary changes. Several medications are used to prevent the immune system from attacking harmless bacteria. They also reduce inflammation. These are listed in Table 1. Your doctor will select 1 or more medications. This depends on the area affected. Other medications are used to heal tissue damage and complications. Some complications clear up during treatment for Crohn’s disease. Some require other treatments.

Many patients have to take agents to reduce diarrhea. All patients must modify their diet. In many cases, symptoms disappear with medication and diet. This is called remission. Most patients have periods of remission and flare-ups.

Surgery may be needed if medications don’t work. Up to 70% of patients will eventually need surgery. The surgery often involves removing the diseased section of the intestine. The 2 ends of the healthy intestine are then sewed together. Even with surgery, patients may experience flare-ups.

There are several things you can do to reduce and manage your symptoms. These are listed in Table 2.

Where Can I Get More Information?

The Crohn’s & Colitis Foundation of America (www.ccfa.org) provides lots of good information on managing symptoms. They have forms for a dietary food diary and for tracking flare-ups. They also offer support groups. Support groups are very helpful. Members help each other understand Crohn’s Disease. Support groups also discuss ways to cope with the disease.

Dr. Zanni is a psychologist and health systems consultant based in Alexandria, Virginia.
References: