Depression: Underdiagnosed and Undertreated
2011-01-13 07:30:35
Guido R. Zanni, PhD
Among older Americans, approximately 15% are clinically depressed.  Pharmacists should review patient's medication regimen and discuss symptoms, review drug side effects, and counsel the older patients about this underdiagnosed medical condition.
Depression is a leading cause of impairment, but it is often undiagnosed or underdiagnosed. During any 2-week period, 5.4% of noninstitutionalized individuals 12 years and older are depressed. Among adults, 16.2% will experience depression at some point in their lives.1,2 Lifetime incidence varies by gender—20% for women and 12% for men. Depression recurs in approximately 60% of patients within 5 years of the first episode. After 2 or 3 episodes, recurrence climbs to 70% and 90%, respectively.1

Depression in Elders
Among older Americans, approximately 15% are clinically depressed.3 More than half of these cases represent late-onset depression.3 Furthermore, up to 5 million elders have subsyndromal depression, symptoms that fall short of meeting diagnostic criteria but increase risk for major depression.5

Elder depression is often described as “depression without sadness.”3 Compared with their younger counterparts, elders are less likely to present with affective symptoms and more likely to display cognitive changes, somatic symptoms, psychomotor retardation, feelings of worthlessness and guilt, and a loss of interest in once-cherished activities. Biology, particularly age-related neurological changes, appears to play a prominent role in latelife depression.3 Unless serious cognitive impairment is present, elders have prognoses similar to those of middleage adults, but medication adherence is key. Studies demonstrate that medication adherence for 2 or more years reduces relapse rates by 60%.3 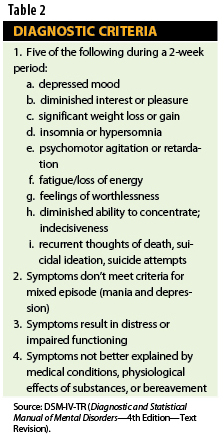 Combined therapy and medication is often recommended, although findings on the superiority of combination therapy compared with medication or psychotherapy alone are mixed. Electroconvulsive therapy (ECT) is recommended for patients failing to improve with medication or therapy who have a significant suicide risk. ECT is performed under general anesthesia. Phototherapy, using artificial light to mimic longer daylight hours, is the most effective treatment for SAD.

Selective serotonin reuptake inhibitors (SSRIs) have the advantage of easy dosing and low toxicity in overdose. Serotoninnorepinephrine reuptake inhibitors (SNRIs) have side effects similar to those of the SSRIs, except that the SNRIs have been associated with a sustained rise in blood pressure. Atypical antidepressants have low toxicity in overdose, and cause less sexual dysfunction and GI distress than the SSRIs. Tricyclic antidepressants are used infrequently because doses must be titrated for a therapeutic effect and they can be toxic in overdose. Monoamine oxidase inhibitors (MAOIs) increase risk for hypertensive crisis and require a low tyramine diet. MAOIs’ other adverse effects can include insomnia, anxiety, orthostasis, weight gain, and sexual dysfunction.6

Counseling
Prior to counseling, pharmacists should evaluate the patient’s medication regimen. Depression is a common side effect of numerous medications (see Table 4).

Effective counseling begins with patient education. Inform the patient that depression is common; it is a medical disease, not a character flaw. Review side effects with patients, noting those that are short term. Emphasize that it may take weeks for the patient to feel better and that adherence is critical. Tell them never to discontinue their medicine without talking to their physician. If the patient complains about side effects, note that antidepressants from other classes may have different side effects. The FDA issued a black box warning in 2007 on all antidepressants adolescents and young adults up to the age of 24. Always coach these younger patients to call their physician immediately if they become agitated or irritable, begin thinking about death, or feel their depression is worsening.

It is important to review side effects with patients, especially the older population. The most common side effects associated with SSRIs and SNRIs include headache and nausea (often temporary), insomnia, nervousness (usually subsides over time), and reduced libido. Side effects for tricyclics include dry mouth (encourage patients to drink plenty of water, chew gum, and clean teeth daily), constipation (recommend a high fiber diet), bladder problems (emptying the bladder may be difficult, or weak urine stream), sexual problems, blurred vision (usually temporary), dizziness when rising quickly from a bed or chair, and drowsiness (recommend taking medication at night).7 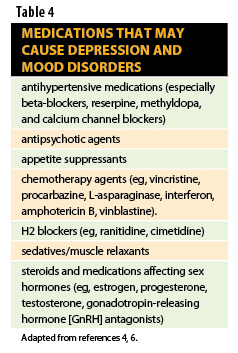 Final Thought
Suicide is depression’s most tragic manifestation. It is a myth that people who talk about suicide don’t commit suicide. Those in crisis who need help immediately should call the National Suicide Prevention Lifeline (1-800-273-TALK [8255]), a 24-hour confidential hotline. PT

Dr. Zanni is a psychologist and health systems consultant based in Alexandria, Virginia.
2750
Depression: Underdiagnosed and Undertreated
Among older Americans, approximately 15% are clinically depressed. Pharmacists should review patient's medication regimen and discuss symptoms, review drug side effects, and counsel the older patients about this underdiagnosed medical condition.
/publications/issue/2011/January2011/Counseling-0111